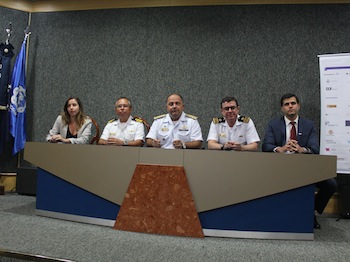 The Brazilian Navy shares view on the situation of foreign offshore vessels in Brazilian waters during seminar organized by the NBCC legal and regulatory committees.

«This is a topic of great concern to the Brazilian Navy», the DPC’s Director Vice-Admiral Wilson Pereira de Lima Filho said in the opening remarks to the event. «Today´s seminar is a good opportunity to discuss how to handle the great number of vessels without contracts. We are concerned with the abandonment of vessels, and don´t want to see this becoming a common practice in Brazil», Admiral Lima Filho said.

NBCC’s President, Rachid Felix, welcomed the open and objective interaction between the industry and the Brazilian Navy.

«Our industry is currently going through a deep crisis, and taking into account that a great majority of the offshore support vessels in Brazil are foreign flagged, the Brazilian Navy has been proactive in its approach», he said.

CF Nogueira talked about the responsibilities of the navy and the history of DPC, an institution within the navy that was created by an imperial decree in 1808.

«It is also the responsibility of the navy to fiscalize the entrance and permanence of foreign vessels in Brazilian waters», he said, before presenting a series of cases that have caused headache to the navy the last few years:

In 2012, «NM Seawind», a cargo vessel with a Panama flag, went down outside of Fortaleza with a marble cargo. The ship was abandoned by the shipowner and the crew left the country.

In 2014, 42 different deficiencies were found during a inspection of Liberian flagged «Adamastos». The ship later stranded in the Port of Rio Grande. The crew left the country, but in this case, the insurance company paid the penalties and towed the ship out of the the port.

The same year, Panama flagged «Iron Trader» sank in the Port of Vitoria, and three years later, the ship still remains in Vitoria.

In 2015, the «Haidar» sank in Pará in the port of Vila do Conde, carrying cattle. 90 percent of the cargo was lost, and the shipowner has still not removed the shipwreck.

The most recent case CF Nogueira presented to the seminar, was the case of the offshore tug/supply vessel «Amazon Chieftain» which was also abandoned by the crew and by the shipowner, the Campos Basin in Rio de Janeiro. The vessel was towing hulls to India, and the hulls were also abandoned.

«Abandonment is a constant concern to us», CF Nogueira concluded.

Working to adjust
CC (T) Péricles talked about what actions the Navy and regulatory bodies have taken to adjust to the situation and how foreign vessels must proceed when arriving in Brazil.

«The first step is to get what we call AIT, «atestado de inscrição temporária», in Portuguese, enabling operations in Brazilian waters, but with the crisis, several vessels find themselves without contracts and out of operations. Many still have administrative or judicial tendencies in Brazil and want to stay. Many also wish to stay in Brazil to await improvements in the market, and the question is how to handle this», CC Péricles said.

He also listed several problems that are frequently encountered, and explained what actions are being taken in a situation where we are faced with an increasing number of vessels without a contract.

«We are working on standardizing procedures and trying to adjust to the situation», he said. The navy is even studying alternative procedures, like the possibility of lay-up of vessels and hibernation of platforms.

«The crisis is forcing us to think differently, and the objective is of course to avoid situations like what happened to Haidar in Pará and Costa Concordia in the Mediterranean.»

The seminar was organized by the Legal and Regulatory Committees of NBCC, together with the DPC:

«NBCC has been performing a great job in stimulating the debates on relevant issues regarding different sectors of the market. The success of the recent event organized by the Legal and Regulatory committees in respect to the situation of foreign flag vessels in Brazilian waters demonstrates that the Working Committees are fulfilling their objectives and bringing a positive contribution to the NBCC community. We must thank the Navy Authority and specially the Directorate of Ports and Coasts for hosting this very interesting event and for enlightening NBCC’s members with great expositions and possible solutions for current challenges that are being faced by the offshore and shipping industries», Lucas Leite Marques and Juliana Pizzolato Furtado Senna, coordinators of the Legal and Regulatory Committees of NBCC, conclude.