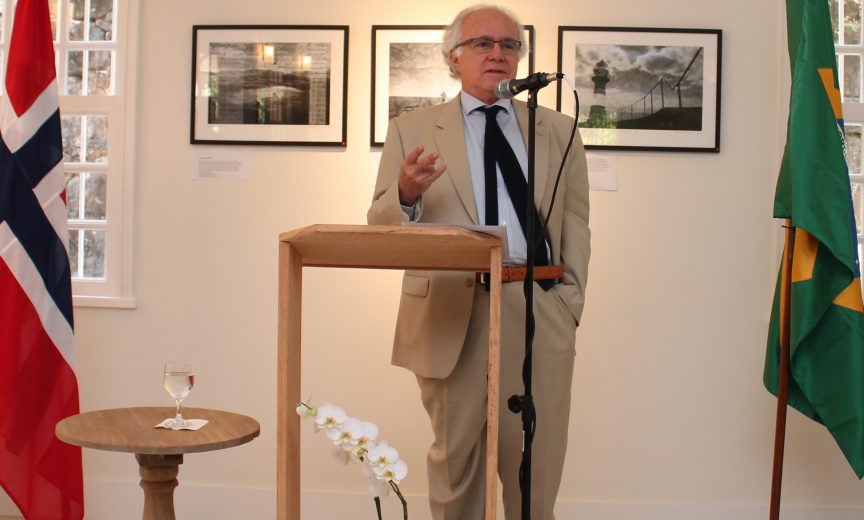 Bicentenary of the Norwegian constitution commemorated during joint NBCC and Consulate General event on May 15, 2014.

From the left: Joaquim Falcão, Helle Klem, Aud Marit Wiig and Halvard Idland.As May 17 fell on a Saturday this year, the traditional Norway Day seminar took place two days earlier, on May 15, and due to the bicentenary of the Norwegian constitution, signed on Eidsvoll on May 17, 1814, the agenda had a cultural and historical focus this year, rather than the more business-related agenda we are used to from previous events.

Symbolic importance
The Norway Day event was organized by NBCC and the Consulate General, and it was one of the the first events to take place in the locations of the new Norwegian church in Gavea, inaugurated on May 3.

After a typical Norwegian breakfast and lovely music from Oslo Camerata on the terrace of the church, music that even excited the monkeys in the area, Norway´s ambassador to Brazil, Aud Marit Wiig, outlined the history of the Norwegian constitution.

Breakfast in the garden.“The Norwegian constitution is the second oldest constitution still in use, and it is hard to exaggerate its symbolic importance, as it seems to embody all our most important national ideas”, Mrs. Wiig said.

She describes the constitution as a declaration of independence, despite the union with Sweden that followed. In 1814, Norway was a poor peasant society that belonged to Denmark and King Fredrik VI had absolute powers over Norway. When Denmark sided with Napoleon, Sweden invaded Denmark and as the Swedish forces were superior,  Denmark was forced to give up Norway. In the treaty of Kiel in January of 1814, Norway was handed over to the King of Sweden and the union between Norway and Denmark brought to an end. Shortly after, the Swedish king returned to the European continent to fight against Napoleon and it was in his absence that a constituency was formed in Norway and the Norwegian constitution written.

Norway still had to enter the union with Sweden, but the Norwegians achieved a large degree of sovereignty, and the constitution of 1814 also guaranteed the unchanging nature of the Norwegian legal system and civil rights.

“When Norway achieved independence from Sweden in 1905, we already had a democratic system and fully functional institutions in place, defined by the principles of the constitution, and the undisputed nature of the constitution has underpinned every legal development since, and made sure that Norway remains Norway during times of change”, Aud Marit Wiig said.

Even the monkeys enjoyed the music of Oslo Camerata.The young nation managed to remain neutral during World War 1, but in 1940, the situation was different. King Haakon and the government went into exile, and it is said that the king carried a pocket size version of the constitution with him throughout the time he was exiled in England.

“He demonstrated great loyalty and this might be an important element in explaining the strong support for the monarchy today. After World War II, the constitution was disregarded, and the death penalty reinstated, in a period of public frenzy, but this made no permanent damage to the constitution. After World War II we have seen a gradual modernization. The challenge today is to review and update the constitution without changing its spirit and principles. More recently we have had to open the doors to international influence, to the European Union and to the UN, but our constitution remains a constant in Norwegian society.”

When the constitution was signed in Eidsvoll 200 years ago, the members of the national assembly shook hands and promised to remain “united and loyal until mountains of Dovre crumble”.

“Although changes have been made, the constitution changes slowly. I think the constitution will continue to guide us, and the mountains of Dovre are not crumbling yet”, Aud Marit Wiig concluded.

Mr. Falcão reminded the audience that in the beginning of the last century, only five or six countries were actual democracies. By the end of the 20th century, 130 countries had made the option of becoming a constitutional democracy.

“The 21st century has different characteristics. This is the century of the implementation of this option, and each country is trying to find their way. This explains the constitutional differences we see. What we share with you is the freedom of expression, the separation of power, free elections, among other things. Norway and Brazil also share a serious concern for environmental protection. 16 percent of the Brazilian territory is environmentally protected and 13 percent belongs to indigenous communities. You share this goal with us, and one of your amendments was aimed to improve the protection of the environment”, Mr. Falcão said, and concluded with a joke:

“I also hope you will accept and support another constitutional amendment – that Brazil will become the next winner of the World Cup.”