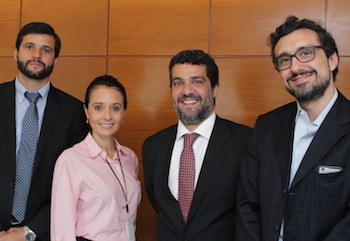 On February 18, 2016, the NBCC Legal Committee invited Flávio Mirza from Mirza Malan Advogados to give a presentation about the ongoing investigations, known as «Operation Car wash» in English.

As we know, Operation Car Wash is the investigation of corruption within Petrobras and other entities. The federal investigation started in March 2014 and is now in its 23. phase. It started as a money laundering investigation, and several convictions have already been made. The entire Brazilian oil and gas sector has been hit hard, and consequences are serious to many big players as the activity level in the industry has fallen sharply the last year. Petrobras recently made further adjustments in its 2015-2019 Business Plan, due to bad cash flow, the low oil price –  but also as a result of the ongoing federal investigation. The investment amounts for 2015 and 2016 were also revised, but the priority of Brazilian oil E&P projects, with an emphasis on the pre-salt layer, was maintained.

In light of the adjustments made in the industry and the convictions made by the Brazilian justice system, hope is that a new dawn awaits the industry. But the need for information is still huge, and the turnout at the meeting reflected this. About 15 people were present for the presentation on February 18, many representing the legal departments of NBCC member companies.

Mr. Mirza, a criminal lawyer who has clients involved in the Lava Jato investigations, also gives lectures at the state university of Rio de Janeiro, UERJ. In his presentation, he focused on the use of plea bargains, known as «delações premiadas» here in Brazil, leniency agreements and compliance.

He also talked about how the investigations have turned into a media circus in Brazilian media and how it is important to remember that an investigation is not to equal to a conviction.

«We need to keep in mind that the penal process presents a hypothesis, and must not be confused with a conviction. The defendant is innocent until proven guilty», Mr. Mirza said.

He compared the plea bargains with a kind of soap opera, and explained that rather than the American expression plea bargain, the English system with the use of «crown witnesses», or even «process easing», are more correct translations of the Portuguese «delação premiada».

«This is not a new phenomenon. It has been used against the mafia, against terrorism abroad, in the Mani Pulite investigations in Italy and in drug cases here in Brazil. With the new Brazilian code on organized crime, it has become increasingly common.»

Concerns were expressed on the extensive use of this tool in the Lava Jato process, and Mr. Mirza explained that a «delação premiada» is merely a method for obtaining evidence, and cannot be considered an evidence in itself.

«No one can be convicted based solely on information provided in a «delação premiada».»

Compliance is a way to control crime and the use of corrupt practices, according to Mr. Mirza.

«It is important to remember that corruption and crime always have, and always will, exist. What we have to do, is to try to control it. This is what compliance does, and it is important to increase the awareness on these matters, for example about giving and receiving gifts, and although this is something new to us, we will for sure see the results in the future

Mr. Mirza also talked about leniency agreements, a new element in the Brazilian Clean Companies Act. These agreements are incentives for the company to collaborate with the authorities to reduce the penalty, and the reduction of the penalty is possible if the company effectively cooperates with the investigations, identifying other wrongdoers, violators and offenders, undertaking and ceasing immediately the harmful practice.

«The idea is to punish the responsible but without breaking the company completely», Flávio Mirza explained.

Matter of the moment
André Carvalho from Veirano is coordinator of the Legal Committee, and he calls Lava Jato the hottest topic of the moment.

«Lava Jato is what the media and newspapers are talking about and we imagined this was also something that would interest our members. Although the lawyers represented here work within other areas, this is a legal matter. Our committee has already had meetings about compliance and regulatory matters and as expected, the turnout and interest today was good», Mr. Carvalho says.

NBCC president Camila Mendes Vianna Cardoso calls it «an important moment in the history of Brazil».

«I went to school during the dictatorship, and I know that it makes a difference to have free institutions and a court system that is free to take the necessary measures. It shows that Brazil is a democracy. Many only see the effects on economy, but there are also important political effects – Brazil has become a more transparent country», she said in an earlier interview with NBCC.

How to deal with unclear information
Operation Carwash was also indirectly the subject of discussions in an internal network meeting hosted by Intsok in January. Intsok is an NBCC member that promotes the Norwegian oil and gas industry abroad.

The Sete Brazil project along with the contracted shipyards have suffered great changes as a consequence of Lava Jato, and the network meeting was held to discuss the status of the project. The main idea was to learn from each other and look at strategies companies may use.

Information is key in the current situation.

He believes that the Lava Jato investigation will contribute to changing Brazil.

«Yes, I am rationally sure that Brazil as a country will be different. For the oil and gas industry, business will be done in a more transparent way where people will think several times to avoid making mistakes. I hope that compliance and ethical behavior will become key concepts for our industry very soon», he says.

Did you know?
The anti corruption policy of NBCC prohibits all improper or unethical payments and conducts and sets forth that compliance with the Brazilian legislation, Law 12.846/13, the Clean Company Act in particular. The guidelines apply to all of NBCCs activities.

The policy was approved and adopted by the Chamber in October 2014, and serves as guidelines for the members, officers, employees and representatives of the chamber.