Fundraiser for the rainforest 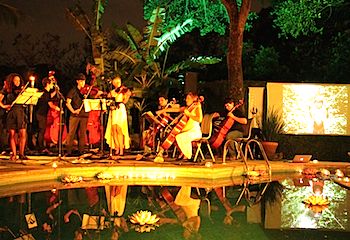 The Annual Norwegian Fundraiser, initiated by Kjetil Solbrække and organized by Norsk i Rio, attracted a lot of people to the Norwegian Church in Gavea in the end of September.

The fundraising event was organized by Norsk i Rio for the first time in 2015, but the idea is to make it an annual happening in the Norwegian community in Rio de Janeiro.

More than R$ 22,000 was raised, and the recipient of this year´s fundraiser is the Norwegian Rainforest Foundation (NRF), working to prevent deforestation of the tropical rainforest around the world.

«We really hope this will become a tradition! A lot of people has contributed and helped, and everything is based on voluntary work, that we are used to from Norway. The contribution from some Norwegian companies has also been important, like Hydro who we thank immensely», Norsk i Rio chairman Marit Cecilie Albretsen says.

The event took place at the Norwegian Church in Gavea on September 25, 2015 and a little more than 100 people were present.

The fundraiser featured concerts, an art exhibit with the work of local artists and a fundraiser auction, as well as a little movie greeting from the hosts of the actual Norwegian TV Auction that will take place on October 18, 2015.

«We are very happy to have these musicians with us. We are also extremely proud and honoured that Liah Soares accepted our invitation to perform here tonight. It is a perfect mix of Norwegian and Brazilian artists», Marit Cecilie Albretsen says.

A ticket to the a-ha concert during Rock in Rio may have been among the most desired items of the auction, but home-made Norwegian bread, sessions with a personal trainer, rock climbing, samba school tours, a favela visit, stand up paddle and Portuguese lessons were also among the many other attractive items available for bidding in the auction.

«Whatever we manage to raise here tonight, we will be satisfied, but I really hope people will open their wallets and contribute generously. The rainforest is our lungs, and extremely important for our future and for our wellbeing. It is a cause that will never lose importance, despite understandably having other humanitarian issues competing for our attention at the moment», Marit Cecilie Albretsen says.

«We wanted to bring Norwegian and Brazilian musicians together to contribute to this important cause, and we are very happy to be a part of this. It is also important to raise awareness among the young Brazilians about the rainforest and show them that people in other countries also care. We can never lose focus on the rainforest. The future of our home, our planet, is at stake», Kaja Fjellberg Pettersen says.

The toast masters of the event were Torbjørn S. Larssen and Jørgen Tengs Pedersen, and in their opening address to the audience, they talked about the Norwegian fundraising show broadcasted by NRK every year, and about the foundation chosen to receive this year´s funds.

The event also featured addresses to the audience by RFN founder Lars Løvold and the Norwegian Minister of Climate and Environment, Tine Sundtoft, who recently visited Brazil for the first time.

«We are present in 11 countries, but it all started in Brazil where we have been present since 1990», Mr. Løvold said in his greeting to the event. He expressed gratitude and find it very positive that Norwegians in Rio come together to raise money for such an important cause.

«This is a extraordinary event with wonderful music and art. I would like to thank the organizers and would even claim that this is even greater than Rock in Rio. This is about our common future, and the turnout here tonight demonstrates that we are concerned and that we believe we can make a difference. The Amazon forest is the world´s most important eco-system, so let´s agree on making a substantial contribution and let it become an ongoing commitment», she said.

«Spend your money here tonight – you can afford it», he said.

The Rainforest Foundation Norway (RFN) is one of the world’s leading organizations in the field of rights-based rainforest protection.

RFN was founded in 1989, following the formation of the Rainforest Foundation the same year by Sting and his wife Trudie Styler, after the leader of the indigenous Kayapo people of Brazil, Chief Raoni, made a personal request to them that they help his community protect their lands and their culture. At that time, RFN comprised the Norwegian branch of the international Rainforest Foundation network.

In 1996, RFN became an independent foundation.