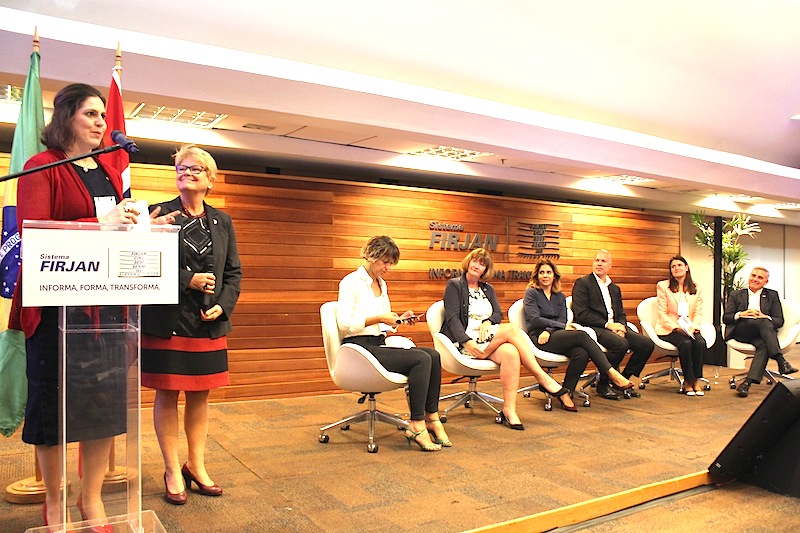 Seminar on gender equality debates the importance of women´s participation in business.

Women account for half of the global labor supply and about 70 percent of global consumption demand. But they still earn significantly less than men all over the world, and they continue assuming more responsibility at home. This is reality in Brazil, but also in a country like Norway, number 2 on a 2017 international gender gap ranking. According to Firjan, The Federation of Industries in Rio de Janeiro, it is fundamental that both industry and businesses make gender equality a priority, and on May 22, 2018, a seminar dedicated to gender equality as a boost for economic development took place in Rio de Janeiro. Keynote speakers were Adriana Carvalho and Anita Baggio. 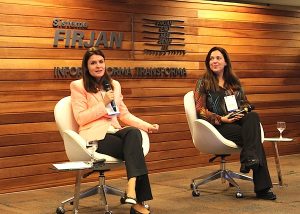 Keynote speakers: Anita Baggio and Adriana Carvalho (to the right).

Barriers
Adriana Carvalho represents ONU Mulheres, and in Brazil, the organization is working to reach a 50-50 representation of men and women in all public bodies and offices, by 2030. On the global gender gap ranking from 2017, where Norway is number 2, Brazil is ranked number 90. Women in Brazil earns 25 percent less than men.

«Gender equality is good for the economy. The world as a whole could increase the global GDP by 5,3 trillion by 2025 by closing the gender gap in economy participation by 25 percent over the same period. Gender equal states are more peaceful and stable states, less likely to turn to violence, and equality is the smartest decision for businesses as well, ensuring better results and better qualified employees. Today, women are the majority in higher education. Most consumer decisions are taken by women», Adriana Carvalho said.

In Brazil, 165 companies are part of a project that works to increase private sector commitment to gender equality, and Adriana Carvalho also outlined the main pillars of the project in her presentation during the seminar. 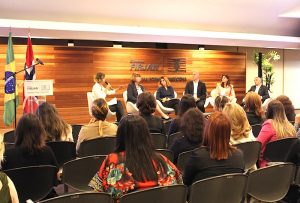 Anita Baggio, partner at McKinsey&Company  presented research and reports on the positive impact of women in business. The benefits of unlocking the economic potential of women, are substantial.

«Diversity and inclusion do have an impact on business. It makes sense economically, and performance improves. If gender parity was reality in Brazil, the result would be a US$ 410 billion, a 14 percent, increase in GDP.»

«This is why it is shocking that nothing or almost nothing is being done.»

Anita Baggio also presented studies on how the human brain tends to follow established patterns and maintaining status quo, something that could explain the barriers women are facing.

«Women also create internal barriers, and every woman needs to start with herself», Mrs. Baggio said.

No time to lose
The seminar was organized by The Consulate General of Norway, Innovation Norway, NBCC, the Consulate General of Canada, Câmara de Comércio Brasil-Canada and Firjan and representatives of the organizers held welcoming statements to set the stage for the event. Luiz Césio Caetano, President of the social responsibility council of Firjan said he hopes the event will trigger a much needed debate on the topic. Norway´s Consul General in Rio de Janeiro, Sissel Hodne Steen said that the macro-economic importance of women´s participation cannot be underestimated.

«In Norway, women´s employment is very important for our country´s wealth and we would have suffered a huge loss in GDP without women, a loss that equals the value of our sovereign fund. But we still have a long way to go, and no time to lose», she said. 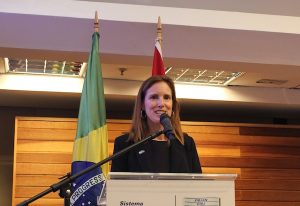 Canada´s Consul General Evelyn Coulombe said that Canada´s Prime Minister Justin Trudeau is proud to call himself a feminist. «There is a correlation between gender equality and development and this is important for Canada», she said.

Director of Innovation Norway, Stein Gunnar Bondevik said that talent has nothing to do with gender and that gender difference is a social construction. «We cannot wait, but need to make policies to change the obvious», he said.

Common sense
The final part of the seminar was organized as a panel debate, moderated by Joana Burigo, founder of Casa da Mãe Joanna. 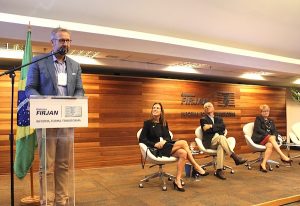 «Brazil does not even have 10 percent women in Parliament and Brazilian women do not have the right to abortion. These are facts that show that there is still a long way to go. But we have to keep debating these issues until they become common sense. It will take hard work, but it is good for business and good for people.»

Alex Imperial shared how a male-centric organization represent challenges, like the lack of infrastructure, even in a company like DNV GL, where gender equality always has been important.

«The corporate culture of the company needs to embrace this, so that it is not only something we agree on on paper. My company is making an effort to increase the interest among women for alternative career options, by adjusting to their reality».

Marcelo Mafra of ANP shared how he tries to adjust his organization, so that women can climb the professional ladder without being forced to choose between a career and being a mother.

«We have an obligation to fight this fight, look for talent and competence and develop leaders. In ANP, there are no differences in salaries, but there is definitely space for more women in leadership positions» 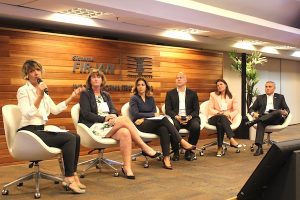 According to Firjan, the focus on gender equality is something recent.

«We are still only crawling, and the gender gap represents a huge loss to the industry of the state of Rio», Luiza Proença said.

«In closing the gender gap there is a huge potential and I want to pick from the best professionals. We need diverse organizations in order to deliver innovation and survive the harsh competition in the market. It is obvious why this must be on the agenda», Marianne Terland Nilsen, director of paint producer Jotun, concluded.

Other organizations that supported the seminar were Diálogos Nórdicos, The Nordics and Wista Brazil, represented by Flavia Maia, chairperson of the event.