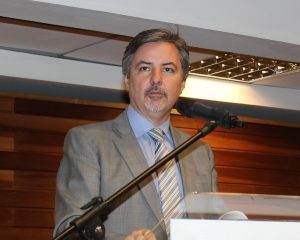 General Director of Total in Brazil, Maxime Rabilloud, speaks about perspectives and opportunities for the Brazilian oil and gas market.

Maxime Rabilloud is the General Director of Total E&P Brasil since March 2015 and has been in the Total group since 1999. He was the keynote speaker at an event organized by NBCC, The German Chamber of Commerce – AHK – and Firjan on September 20, 2017.

The presentation by the Total executive was certainly a unique chance to get some insight into Total´s vision on challenges and opportunities in the Brazilian oil and gas market, and the event attracted 400 people to the Firjan Conference Center in Rio de Janeiro. 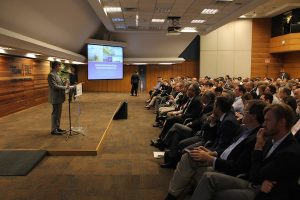 «In Brazil, our activities took off towards the end of 2012. In 2013 we assumed a 20 percent participation of the Libra field, and in 2017 we signed  a Strategic Alliance with Petrobras. We believe in Brazil and continue investing in the country», Mr. Rabilloud said.

The executive also spoke about the importance of the oil and gas industry for global energy generation, and about the company’s ambition for the next 20 years.

«At Total, we believe we have a responsible to provide tangible solutions, and that means provide affordable, reliable and clean energy. Our ambition is to become the responsible energy major”, said Rabilloud.

The presentation was followed by a Q&A session. Total´s investments in Research and Development (RD), the company vision on alternative energy sources, on digitalization, on gas development in Brazil and Total´s relations to local suppliers were some of the topics addressed in this session. 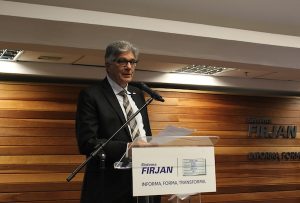 «The resumption of the bidding rounds will bring more investments and create a more plural business environment, with more opportunities. The industry has shown maturity these last years. Cooperation has been a key word and is also a powerful tool in facing future challenges», Mr. Felix said.