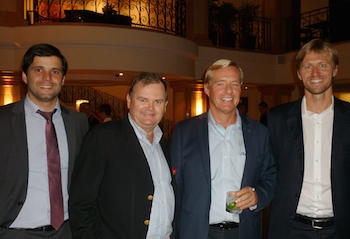 A great occasion for strengthening relations and developing synergies among the participants, according to the present members at the event.

Networking is essential to doing business in a country like Brazil and many members took the chance to meet colleagues and business associates in a relaxed and informal environment at the hotel lobby bar.

From the left: Anders Permin, Ørnulf Steen and Janis Majors.

The event even had the presence of VIP guests from the NBA basketball team Cleveland Cavellars, who were staying at the hotel. Here Glorisabel Garrido with Anderson Varejão.