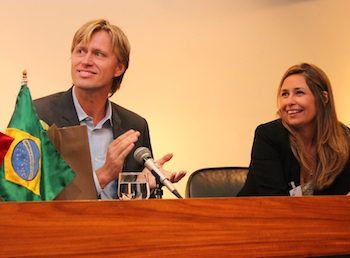 Halvard Idland of Pareto Securities is the new president of the NBCC. Camila Mendes accompanies him as vice-president in the top leadership of the chamber.

Halvard Idland and Camila Mendes, the new president and vice-president of NBCC.The Annual General Meeting (AGM) of the Norwegian Brazilian Chamber of Commerce took place on March 25, at the “Federação das Câmaras de Comércio Exterior” (FCCE) in the city center of Rio de Janeiro. About 25 members were present for the AGM, where Paulo Rolim stepped down as president and former vice-president Halvard Idland took his place. Camila Mendes Viana Cardoso is the only new face to the top leadership in the chamber as the new vice-president of the chamber. Erik Hannisdal continues as treasurer for another period.

There were also changes in the board of the chamber. Helge Austbø from DOF, the third largest Norwegian investor in Brazil is new to the board.

Busy and challenging
Today, the NBCC has 90 members. While seeing some member companies leave the chamber last year, this January five new companies have joined as Corporate members.

The new president Halvard Idland identified two challenges that will mark his work in the chamber in the months to come:

“I really appreciate the trust I have been given. Its going to be very interesting and very busy, but I am looking forward to taking over as NBCC president. It is however obvious that the reduction in the number of members means a reduction of income. This is something we have to work to turn around. At the same time we are experiencing an increase in costs. The chamber is however in a stronger position today, a position where we can create more value and offer more services to our members. I am excited to move forward, and I am confident we will tackle these challenges together”, Mr. Idland said.

Paulo Rolim stepped down after one busy period as NBCC president.Former president Paulo Rolim expressed gratitude to his fellow board members for the assistance the last year.

“I am proud to be handing over a more professional chamber to my successor, and would like to highlight three important achievements this last year. In 2013 we improved the communication between the board and the members by organizing a network meeting. As a result of this, the chamber will be forming several working committees this year, where subjects of the members´interest will be discussed more thoroughly. Last year we also hired an executive manager to take some weight of the board, and Glorisabel has contributed to making NBCC a more professional chamber”, Mr. Rolim said.

He also presented the annual report of the chamber to the present members, and highlighted some of the main events of 2013, among them the Norway Day presentation by Sete Brasil CEO Joao Ferraz in May, the event with Engevix and Ecovix CEO Gerson de Mello Almada last August, and the presentation by CEO Roberto Ramos of Odebrecht Oil and Gas in January.

“It is a satisfaction to us to present Brazilian companies with great success in times where bad news has dominated the coverage of Brazil”, Mr. Rolim said.

New committees
Treasurer Erik Hannisdal went through the financial situation of the chamber.

About 25 members found their way to this year´s AGM.“NBCC is a non-profit organization. 2014 is a transition year, and the goal is to break even while NBCC develop further. We are investing stronger in our executive team and want to offer more events and develop additional services to our members as well as building a solid operational structure that can attract and satisfy more members”, Mr. Hannisdal said.

VP Camila Mendes also informed the present members about the new working committees on different topics that will be formed. Topics such as legal, finance and human resources have been identified and members interested in participating were encouraged to step forward.

The main events on the agenda for 2014 are the Norway Day event on May 15, where the 200 year anniversary of the Norwegian constitution will be celebrated, and the networking dinner during Rio Oil & Gas.