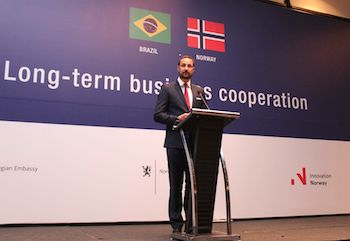 Several hundred executives and key industry representatives from Norway and Brazil were present for a series of seminar on the oil&gas and maritime industry, seafood, investments and renewable energy in Rio de Janeiro on November 17, 2015.

The seminars were organized by the Norwegian Consulate General in Rio de Janeiro, Innovation Norway, Intsok and ABRAN/Norwegian Shipowners´ Association.  HRH Crown Prince Haakon and Norway´s Minister of Trade and Industry, Mrs. Monica Mæland headed a 90 people strong delegation on a five day visit to Brazil this November, and five deputy ministers were also part of the official delegation.

The annual Norwegian investments in Brazil rose 32 percent in 2014, to USD 1,4 billion, and the oil&gas, offshore and maritime sectors concentrated over half of all inbound Norwegian investments into Brazil last year. 2015 is however likely to be a turning point for some indicators, increasing the importance of a royal visit to Brazil, contributing to boosting the visibility of Norwegian players and increasing the focus on the bilateral relations between the two countries.

Shared values
On November 17, 2015, His Royal Highness Crown Prince Haakon gave the opening remarks to a business event in Rio de Janeiro. Norway´s Minister of Trade and Industry, Mrs. Monica Mæland and the president of the Brazilian development bank, BNDES, Mr. Luciano Coutinho, were also among the keynote speakers in the opening session of the seminar.

– This seminar is in many ways the centre piece of our visit, bringing together people from the world of business, politics, academia and government. It is an opportunity to share perspectives. Brazil is a prominent voice with influence on the international stage. Norway is a smaller country, but we share values and have many of the same interests. Brazil is currently the third largest market for Norwegian supply and service industries and Norwegian companies have a significant presence in a variety of sectors. Norway continues to take a long term approach and our relations are expanding beyond the oil and gas sector, HRH Crown Prince Haakon said, referring to the Norwegian-Brazilian partnership in protecting the Amazon forest, cooperation on education, research and renewable energy.

– In the energy sector we work together to develop tomorrow´s technological solutions, he said.

In her address to the business seminar, Monica Mæland highlighted the need for new solutions and technologies in order to mitigate the challenges that the decline in the oil price is creating in the international market.

– Brazil is a leading laboratory for global innovation, constantly breaking new barriers offshore, and I am happy that so many partnerships are established between Norwegian suppliers and Petrobras. The Norwegian government has a long term commitment to Brazil, and we must also strengthen our cooperation in other sectors, she said.

Deputy Minister of Petroleum and Energy, Mr. Kjell-Børge Freiberg, talked about the BN21 agreement on research collaboration in his address to the seminar.

– The number of Norwegian companies present in Brazil tells us that this is an attractive market. Norway is dedicated to fulfill the objectives in the agreement in the field of oil and gas and I am proud of promoting the industry and believe we have a lot to offer in the further developing of Brazilian resources, he said.

BNDES president Luciano Coutinho talked about the common goals, needs and challenges that Norway and Brazil have in the oil and gas industry, in his opening address to the seminar.

– Norway and Brazil also have convergent interests in renewable energy, fisheries and environment, and I must express gratitude to Norway. The Norwegian contribution to the Amazon fund has been fundamental.  We should use this seminar to move forward, he said.

The DNB and Finep teams.An MOU between Norwegian bank DNB and the Brazilian innovation agency Finep was also signed during the opening session of the business event. From now on, DNB will be able to issue guarantees for innovation projects finances by Finep. The agreement was signed by Katrine Trovik and Finep director Claudio Guimarães Junior in the presence of His Royal Highness and other excellencies.

In the an introductory session of the oil&gas and maritime seminar, CEO Sturla Henriksen of Norwegian Shipowners` Association talked about the close relationship between Norway and Brazil.

– After 104 years NSA opened its first international branch, ABRAN, here in Brazil in 2013. This says a lot about our close relations. Every year 3000 port calls are made by Norwegian vessels in Brazil. But both our countries are affected by the drop in the oil price, and in challenging times it is more important than ever that good friends maintain a good dialogue. It is also in the spirt of friendship that I would like to voice some concerns that our shipping companies are experiencing, Mr. Henriksen said.

From the left: Kristian Siem, Kjell-Børge Freiberg and Sturla Henriksen.One of these challenges is related to predictability and transparency in Brazil, the second is the national content requirements which continue to push up cost in a situation where there is a need for drastic cuts to maintain competitiveness. The third concern has to do with Petrobras chartering practices during these times of crisis.

Kristian Siem, chairman of Siem Industries Inc, said that the industry needs to find a way to work smarter. He predicts that the activity level in the Brazilian oil and gas industry will only pick up in 2018.

– The name of the game is cooperation. Let´s get the facts on the table and minimize the damage through cooperation. I think we will come out of this downturn as a stronger industry, he said.

In separate panels, the cost efficiency challenges in the offshore maritime industry and the current trends in the Brazilian oil and gas industry was discussed. IBP president Jorge Camargo, and Petrobras executive Cristina Pinho were the moderators of the panels. Petrobras manager Orlando Ribeiro talked about how the crisis is forcing Petrobras to «reinvent itself». Lars Christian Bacher, Executive Vice President of Statoil called Brazil «the perfect strategic fit» to Statoil, but admitted that «too much cost and too much complacency» has become a problem in the industry, which is now faced with the dual challenge of profitability and legitimacy, as more people are questioning the role of the petroleum industry in low carbon perspective.

– But if we look at the trend lines instead of the headlines, they are good. The world needs energy, and hydrocarbons will remain important, he said. Flávio Rodrigues of Shell Brasil, Marcelo Menicucci of BG Group and Maxime Rabilloud, CEO of Total do Brasil also participated in this panel.

From the left: Elisabeth Tørstad, Cristina Pinho and Marianne Møgster.According to Elisabeth Tørstad, CEO Oil & Gas, DNV GL, Brazilian assets or resources are among the most attractive in a global scenario, citing Goldman Sachs numbers from May 2014. This has to do with the overall cost level in the Brazilian industry.

– The capex per barrel of oil produced has however increased more than the inflation, and standardization could be a way to curb cost, Mrs. Tørstad said.

– We are not in Brazil for one year, not for 10 years. We are here for generations.

High crew cost is another factor driving costs in Brazil. Lars Peder Solstad, the CEO of Solstad Offshore, says crew cost is about 30 percent higher in Brazil, and also called internal bureaucracy in Petrobras a show stopper for good deals.

Geir Håøy, president of Kongsberg Maritime, talked about the importance of being local, and said that the employees are the company´s most valuable asset.

– We will continue investing in them, he said.

Felipe Meira, Executive Vice President Americas of Farstad Shipping, warned that you also need to take performance into consideration when talking about cost, as the lowest rates might result in a more expensive operation if performance is poor.

Closing remarks were given by Deputy Minister Morten Høglund.

– Few countries are more important for Norwegian business interests than Brazil, particularly for the oil, gas and maritime sectors. By any yardstick, Norwegian companies are making an impressive mark here in Rio, as they are elsewhere in Brazil. This shows that the knowledge and expertise we have gained in Norway fits well with the demands here in Brazil. And we have learned to integrate with the Brazilian business community, Mr. Høglund said and thanked INTSOK, the Norwegian Shipowners Association and Innovation Norway for organizing the event.

To see the full seminar program with all speakers, click here.