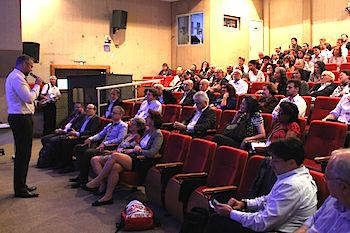 Four common R&D projects are to be financed by Norwegian-Brazilian agencies, and a second joint call is now under planing.

Since the very beginning in 2013, the November Conference has provided a stage for identifying research topics of common interest to Norwegian and Brazilian stakeholders in the oil and gas industry. This month Norwegian and Brazilian researchers once again gathered in Rio de Janeiro for project showcasing and for discussions of new and hot topics.

In 2013, the two countries signed an agreement on increased collaboration within research, development and innovation, The first joint call and funding of common projects the most concrete proof that the cooperation is bearing fruit.

Winning projects
An even closer collaboration on research is of great interest to both Norwegian and Brazilian stakeholders. During last year´s conference, the first joint call between a Norwegian and a Brazilian financing institution was launched. 16 projects applied for Norwegian-Brazilian funding after the first joint call by the Research Council of Norway (RCN) and Finep, and the selected projects have now been announced:

4Subsea and Inoceano will initiate a project on a flexible pipe pressure liner life extension tool.

IRIS Software and Engineering Simulation and Scientific Software will look into modeling of well multiphase flow for increased oil recovery, and WiSub and EasySubsea will do research on data transfer interface for subsea use.

A 5th project has been selected in case one of the four above cannot initiate their project. This is IFE Flow and DPR Engenharia who want to develop a tool for improved prediction for modeling of sand accumulation in pipe separators.

Pleased
The announcement was made at the 4th November Conference took place from October 31-November 1, 2016, in the auditorium of the Brazilian Center for Research in Physics (CBPF) in Urca, Rio de Janeiro.

«Norwegian-Brazilian R&D cooperation is much wanted and has a high level of priority. We are very pleased with the response and with what we have achieved so far. We received many very interesting and good applications, and the process of selecting those who should receive financial support was certainly not easy», says the director of the Department for Petroleum Research, Siri Helle Friedemann.

«The constructive cooperation with Finep has been a positive experience which we will gladly share with our colleagues in the Research Council of Norway that are looking towards Brazil. We now intend to launch a second common call and hope to be contracting in 2018. In this call, priority will be given to universities and R&D institutions», she said in her presentation to the November Conference in Rio.

Her colleague at Finep, superintendent Mauricio Syrio, said that meeting the cost challenge is necessary in today´s scenario and that Finep would like to build bridges between different players and stimulate investments in innovation.

«Economic risk is still an obstacle to innovation in Brazil, but innovation is the key to reduce cost. Finep can reduce financial risk and we promote international cooperation. We are very proud of the results of the joint call with the Research Council of Norway, and it is also the first time Finep has a call with another country where we allocate funding instead of loans», Mr. Syrio said.

In total, Finep and RCN have allocated approximately 2,8 million USD for the projects.

«R&D is the basis for a competitive industry, for higher utilization of resources, and for safeguarding the environment. The BN21 agreement between our nations can unlock values», he said, and thanked Finep and RCN for a job well done on the first joint call.

«Developing domestic capabilities has been a goal since the beginning of the oil era in Norway, and we have always had a strong focus on R&D. Today we have a supply industry that is competing worldwide. 2015 was a demanding year for the industry, and cooperation is crucial going forward», Mr. Knutsen said.

ANP Technical Advisor José Carlos Tigre was also among the speakers on the first conference day, during a session presenting institutional perspectives. He talked about the role of the regulatory body in supporting innovation and technological development in Brazil, and also explained the R,D&I investment clause to the audience. 1 percent of the gross revenues from production on high production fields has to be invested in research. Currently there are 41 such fields in production in Brazil. From 1998 to 2015, 11,2 billion reais are invested as a result of the 1 percent clause.

«New oil is increasingly difficult to be accessed, increasing the importance of research and innovation», Mr. Tigre said in his presentation. ANP sees the R&D clause and the local content regulations as a way of contributing to the acceleration of industrial development of the country.

On Day 2, parallel workshops on topics like flow assurance, environment, integrated operations and nanotechnology were held.

«We need to speed up innovation to find the answers to the challenges we are facing», she said.