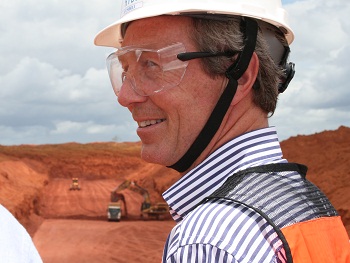 The state of Pará decided to change the collection point of the ICMS tax on fuel-oil purchases from February 1, 2014.

Mr. Johnny Undeli at Paragominas.Assuming that the decision is upheld, the estimated effect on Hydro will be an increased cost of approximately BRL 60 million (NOK 150 million) per quarter, which will be charged to Hydro’s Bauxite & Alumina business area.

“We are concerned about the sudden changes in tax legislation in Pará, and we are doing what we can to try to get the decision reversed, in dialogue with Pará legislators,” says Executive Vice President and head of Bauxite & Alumina Johnny Undeli (in the photo to the left).

“Hydro’s ambition is to develop robust and viable operations in Pará and to be an enabler for sustainable growth for this resource-rich region. In order to pursue that ambition, we need stable and predictable framework conditions.”

ICMS is a tax on goods and services, collected by Brazilian states. The aluminium industry in Pará has an ICMS deferral, which needs to be renewed by July 2015, resulting in an exemption on intra-state purchases of goods and services. However, the recent changes on fuel oil will move the collection point of ICMS from distributors to the oil refineries, which are located outside the state of Pará.

The decision is similar to one made in 2012, when Alunorte temporarily paid ICMS taxes on fuel oil for three quarters. The decision was later reversed.

The obligation to pay ICMS taxes on electricity was previously disputed by the companies, but in light of a recent unfavorable court ruling between an electricity supplier and state authorities, it was accepted to make the payment, thereby enabling the electricity supplier’s participation in the Pará state tax amnesty. The amnesty gave the opportunity to settle the tax case with significantly reduced penalties.

Going forward, ICMS charges will be charged on electricity purchases at a rate of BRL 8 million (NOK 20 million) per quarter, mainly increasing the cost at Paragominas.

Penalties will be treated as items excluded in the fourth quarter 2013 results, while the ICMS charge will be included in underlying results of the same quarter.