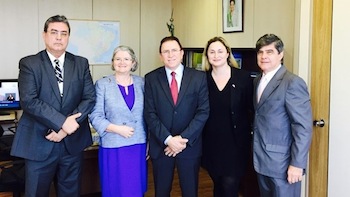 The 4th meeting in the Joint Economic Commission took place in Brasilia on May 19-20, 2015. NBCC president Camila Mendes Vianna Cardoso participated in the talks.

Photo courtesy of NFDNorway´s Deputy Minister of Trade, Industry and Fisheries, Ms. Dilek Ayhan, was head of the Norwegian delegation to Brasilia. Prior to the talks, Ms. Ayhan spent two days in Rio de Janeiro, where she met with several Norwegian stakeholders in Brazil.

Head of the Brazilian delegation was Deputy Minister Ivan Ramalho from the Brazilian Ministry of Development, Industry and Foreign Trade.

It is the 4th time that representatives from the two countries meet for consultations of the Joint Economic Commission, since the recent revival of the commission. Last year, the delegations met in Oslo.

«Maintaining the great dialogue between Norwegian and Brazilian authorities is important to us, and the meetings of the Joint Economic Commission is an important venue to discuss opportunities and challenges in business cooperation», Ms Ayhan says in a press release from her Ministry, dated May 20, 2015.

The cooperation between the two countries is extensive, and several topics were discussed in the meetings, such as oil and gas, maritime cooperation and seafood.

The negotiations on a maritime agreement between Norway and Brazil was also on the agenda, as well as opportunities to further develop trade cooperation between EFTA and MERCOSUL. The first meeting between the trade blocks will take place in Switzerland in June.

Cooperation in science, education, technology and innovation was also discussed, according to the Norwegian Ministry of Trade, Industry and Fisheries.

Great reception
«The reception from the authorities in Brasilia was great, and a variety of topics was discussed. I was impressed with the quantity of representatives that were present during the talks, on both sides. This demonstrates that developing trade and cooperation is a priority to both countries. I was also impressed with the energetic Deputy Minister and the excellent way she conducted the talks», NBCC president Camila Mendes Vianna Cardoso says in a comment.

Both NBCC and the other participants will now analyze and identify the challenges they are facing in order to pass this on to the authorities.

«This was not only a meeting, it was the beginning of a process. We are however still in an early phase, and during the talks several topics of interest to both Norway and Brazil were identified, and all parties involved will now work on how we can develop trade, what barriers we are facing and how we all can improve our performance», the NBCC president says.

Photo courtesy of NFD/Håvard Figenschou RaaenSleeping
The Joint Economic Commission was created after the signing of a treaty on trade, economic, industrial and technics cooperation back in 1978. Last year, the commission was revitalized, and the first meeting since 1981 held in Oslo.

In Brasilia, the parties agreed that the next meeting will take place in Norway in 2016.

Representatives from the Norwegian Ministry of Petroleum and Energy, the Norwegian Embassy in Brasilia, the Consul General in Rio de Janeiro, Innovation Norway, The Research Council of Norway, Norwegian Food Safety Authority, The Seafood Council, the chambers of commerce in Rio and Sao Paulo and Abran were also present during the talks.

«The purpose of my visit is to conduct a meeting with the Joint Economic Commission between Norway and Brazil. I am very pleased with the fact that the commission has been relaunched, with regular meetings. It is very useful to discuss the different challenges for economic cooperation with Brazil, both on an authority level and with the business community. The meeting in Oslo last year was very productive, touching a wide span of topics from the smaller issues to the bigger picture. Today I got input from the NBCC, Abran and Team Norway and I look forward to discussing these things with my counterpart in Brasilia, Mr.  Ivan Ramalho», he said during a breakfast seminar organized by NBCC on May 18, one day prior to the meetings in Brasilia.