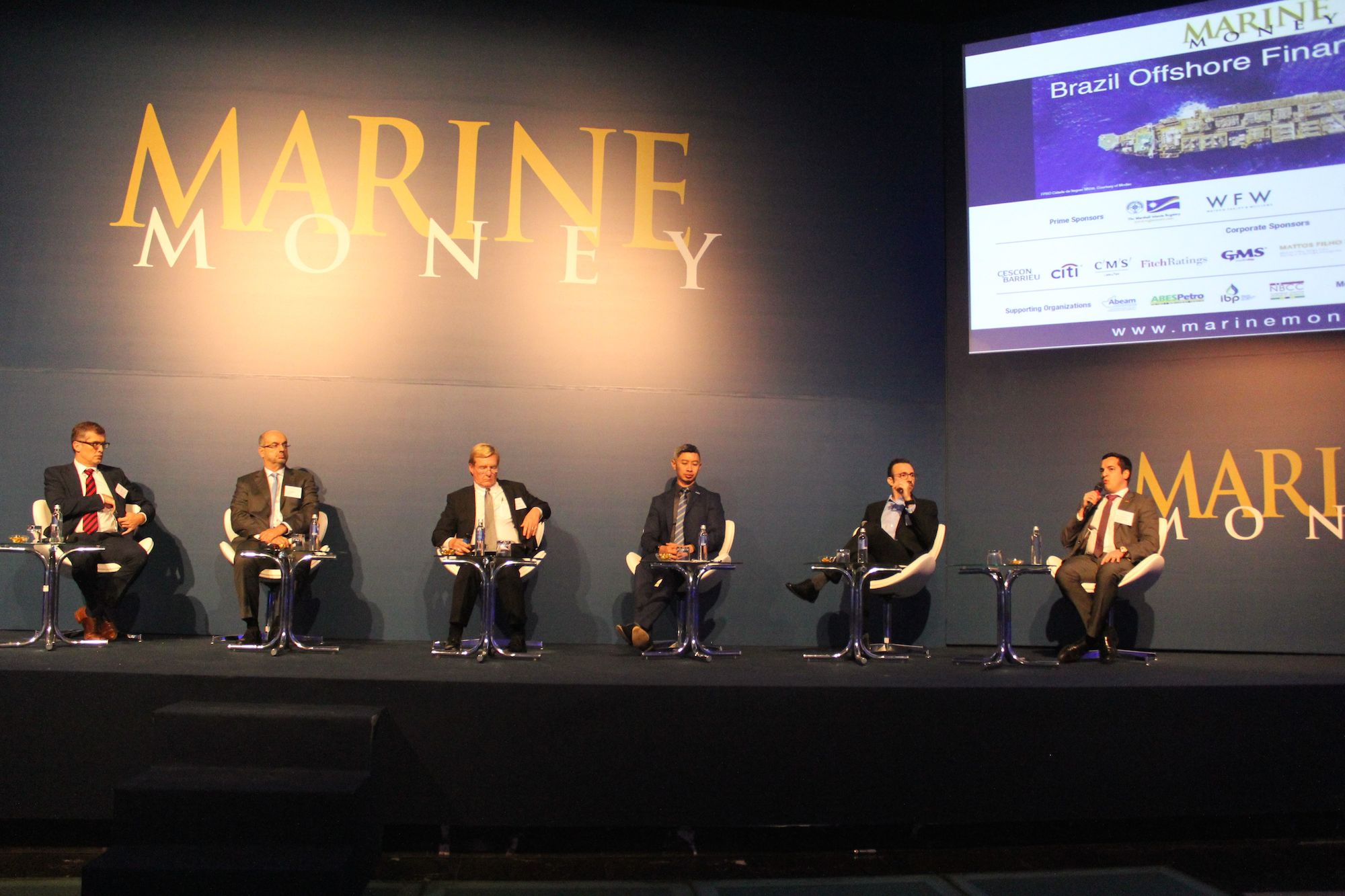 The International Offshore Finance Forum was organized by Marine Money for the 12th time in Rio de Janeiro this year, with a far more positive backdrop than earlier years.

Click on this link to see photos from the event, by Alessandro Mendes.

For three decades, Marine Money has been serving the maritime and offshore industry through publications, forums, analysis and papers, and this year´s Brazil forum gathered a variety of stakeholders, from shipowners, financiers, investors, brokers to lawyers. 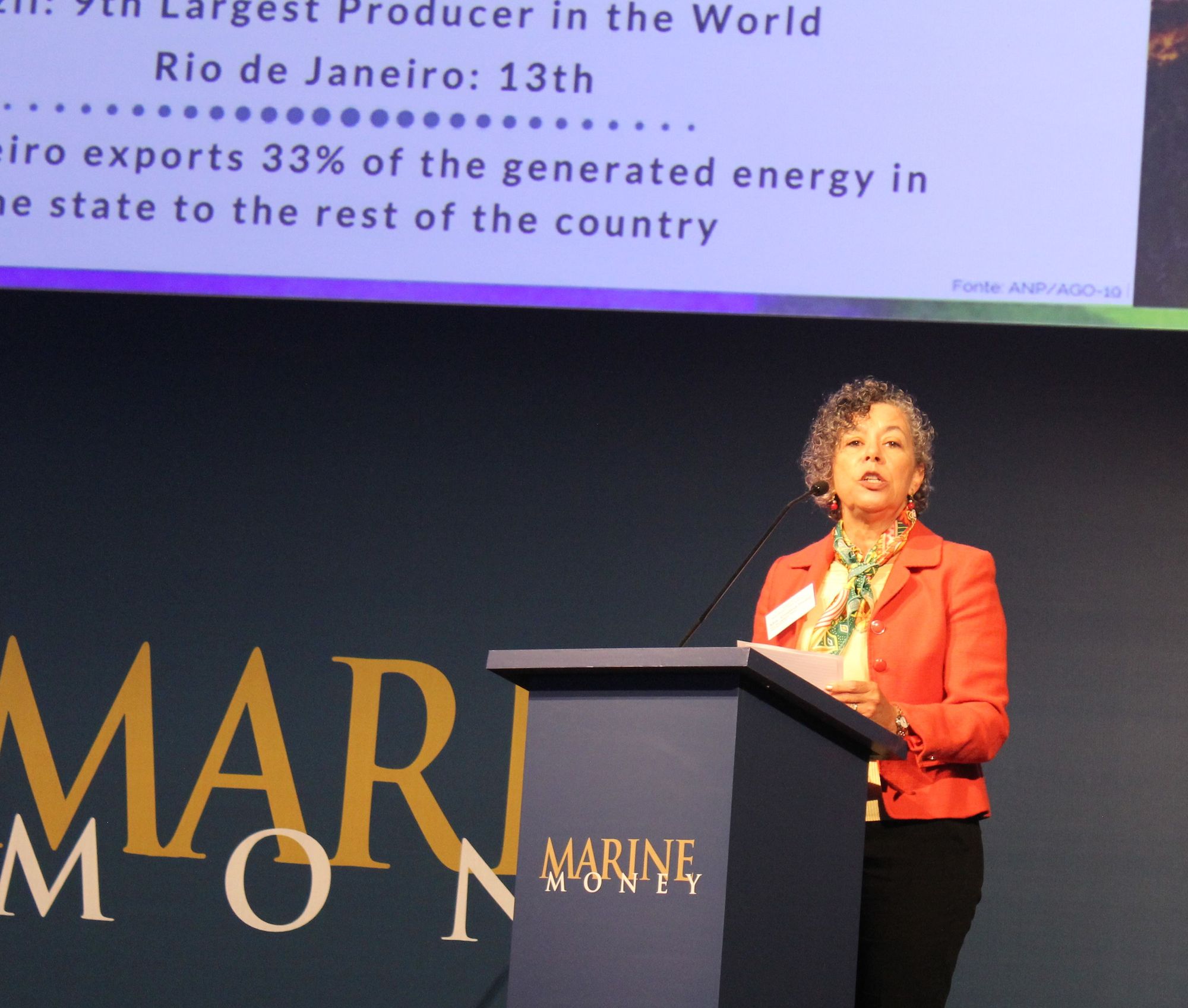 Undersecretary of Oil, Gas and Energy in the state of Rio de Janeiro, Cristina Pinho.

Oil and gas hub
The state of Rio de Janeiro presented investment opportunities to the event, and clearly has big expectations on behalf of the Brazilian oil and gas industry and behalf of the state. Former Petrobras executive, Cristina Pinho, now the Undersecretary for Oil, Gas and Energy in the state of Rio, shared her priorities going forward in the first presentation to the seminar on October 9.

«Rio is the capital of energy in Brazil. We produce 76 percent of the country´s oil and 57 percent of the gas. We have great expectations when it comes to gas production the next decade and expect a 70 percent increase in production. We have a responsibility to increase the gas demand of the state, and need to give a destination to the gas», said Cristina Pinho.

The bid rounds scheduled until 2030 represent investments in the range of USD 250 billion in the state of Rio de Janeiro. The current state government is promoting actions to create an open, integrated and more dynamic market, actions like removal of tax barriers, harmonization of state regulations and integration with the electric sector.

«We expect this to result in new investments. Other priorities on our list are revitalizing the naval industry focusing on repair and maintenance and on decommissioning. We want to be ahead of other states when it comes to decommissioning.  Another priority is building a defense technology cluster in Rio.» 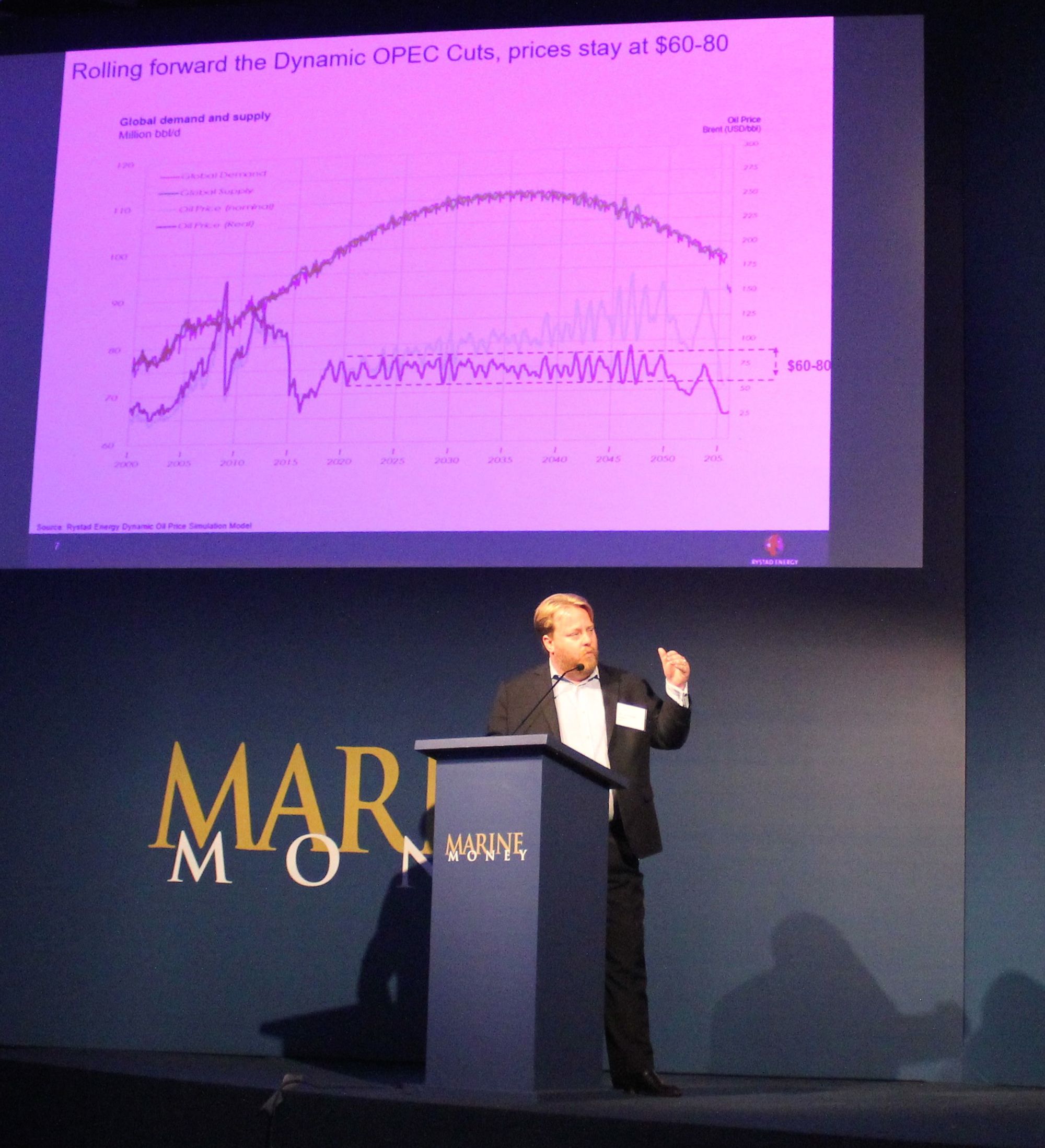 Comeback despite volatility
A lot does however depend on the oil price, and Shcreiner Parker, Vice President Latin America of Rystad Energy, provided the forum with an outlook here.

«Continued US growth creates a challenging global balance for 2020 with a potential oversupply. This is going to create volatility in the market, and an OPEC intervention may be needed to avoid imbalances in the crude oil market.»

«But without OPEC action, there can be severe cycles with the barrel falling as low as USD 25», Mr. Parker said.

Then he tried to answer a question that many are asking these days. Are we seeing the beginning of a new offshore wave?

«We see offshore greenfields projects saving cost and getting heavier, and looking at the greenfield sanctioning activity, an offshore renaissance could occur. Most oil majors are actively exploring in Brazil now and in the future bid rounds we expect the majors to make a big push to expand their presence. We are set for a solid comeback story», Mr. Parker believes.

«The next years we will see sanctioning picking up pace. The overall forecast is that E&P investments will grow at a 4 percent rate. But the renaissance may not last forever and we are looking at a potential oversupply in the period from 2021-2024», he said. 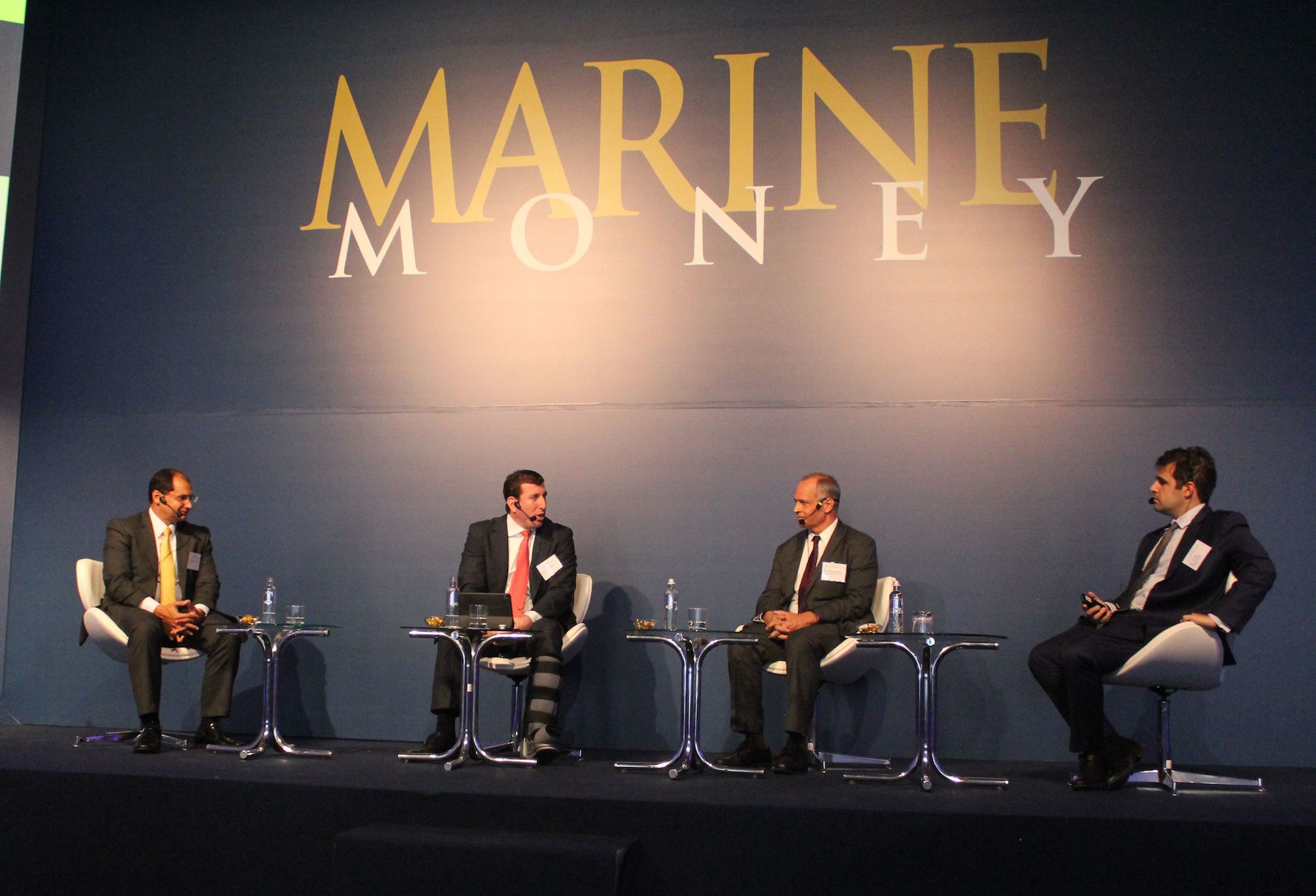 Brownfield opportunities
The forum addressed several topics of interest to the industry in different presentations, like the trend towards and value of integrated services, the recycling market for ship and offshore assets, opportunities within FSRUs and LNG-to Power projects in Brazil and the Petrobras Divestment Program which recently had its goals increased from $26,9 to $35 billion. The divestments are win-win-win for both Petrobras and for new players, but they are complex, and the Petrobras divestment team is currently very busy.

Ricardo Mucci shared experiences from the Maromba field, which he characterized as «great for us at BW Offshore», and too small for Petrobras. 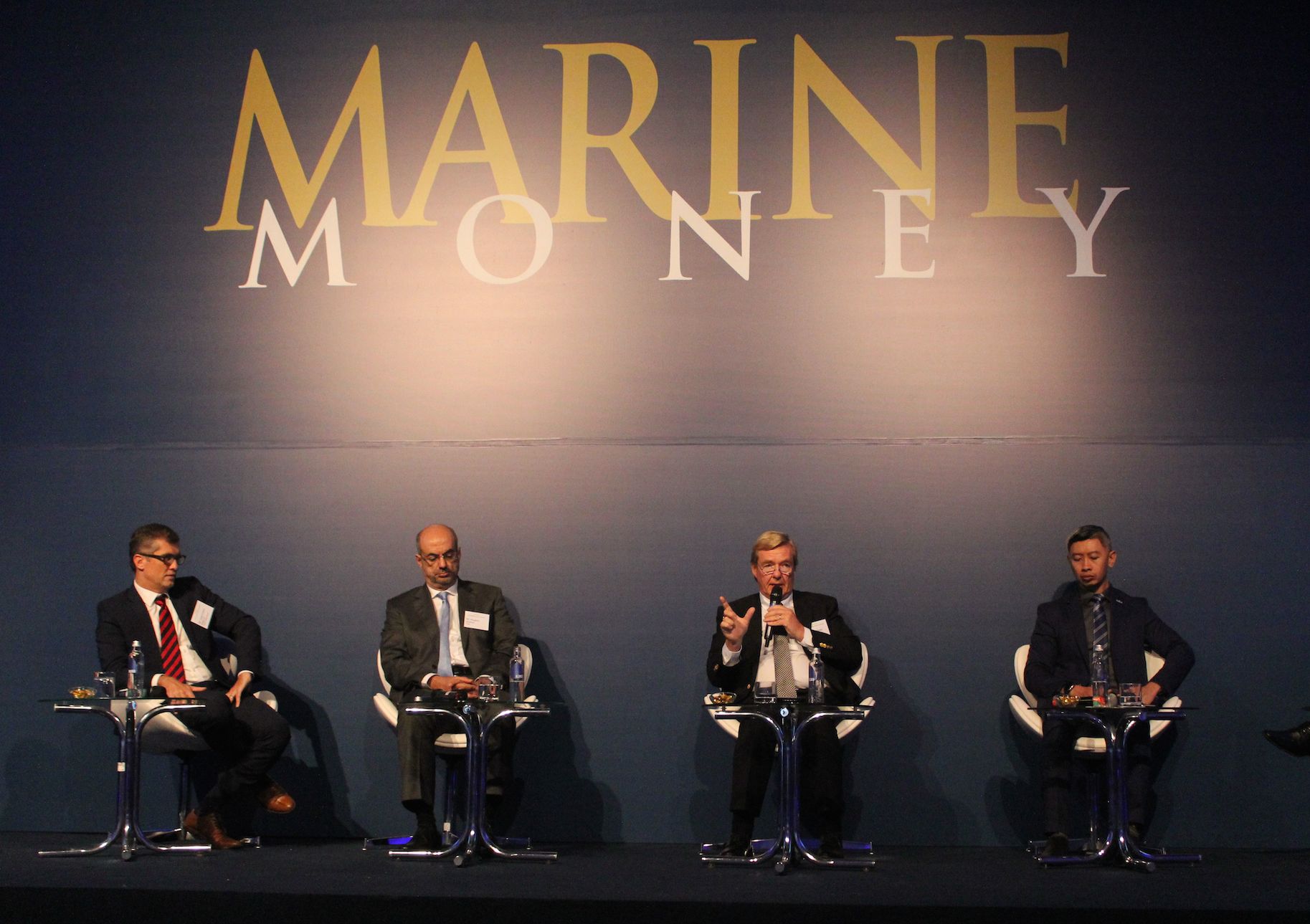 Qualified manpower, labor relations and the lack of legal security in contracts are among the challenges that create cost and exposure to risk to FPSO owners, according to panel.

Busy moment
After a networking luncheon, FPSO contracting models and the growth of Chinese financial leasing were topics on the agenda. A Finance Panel and an FPSO Panel closed this year´s event. 23 FPSO are currently in operation in Brazil, and this is 1/3 of the global fleet.

The panel addressed concerns and shared key considerations associated with this booming sector. 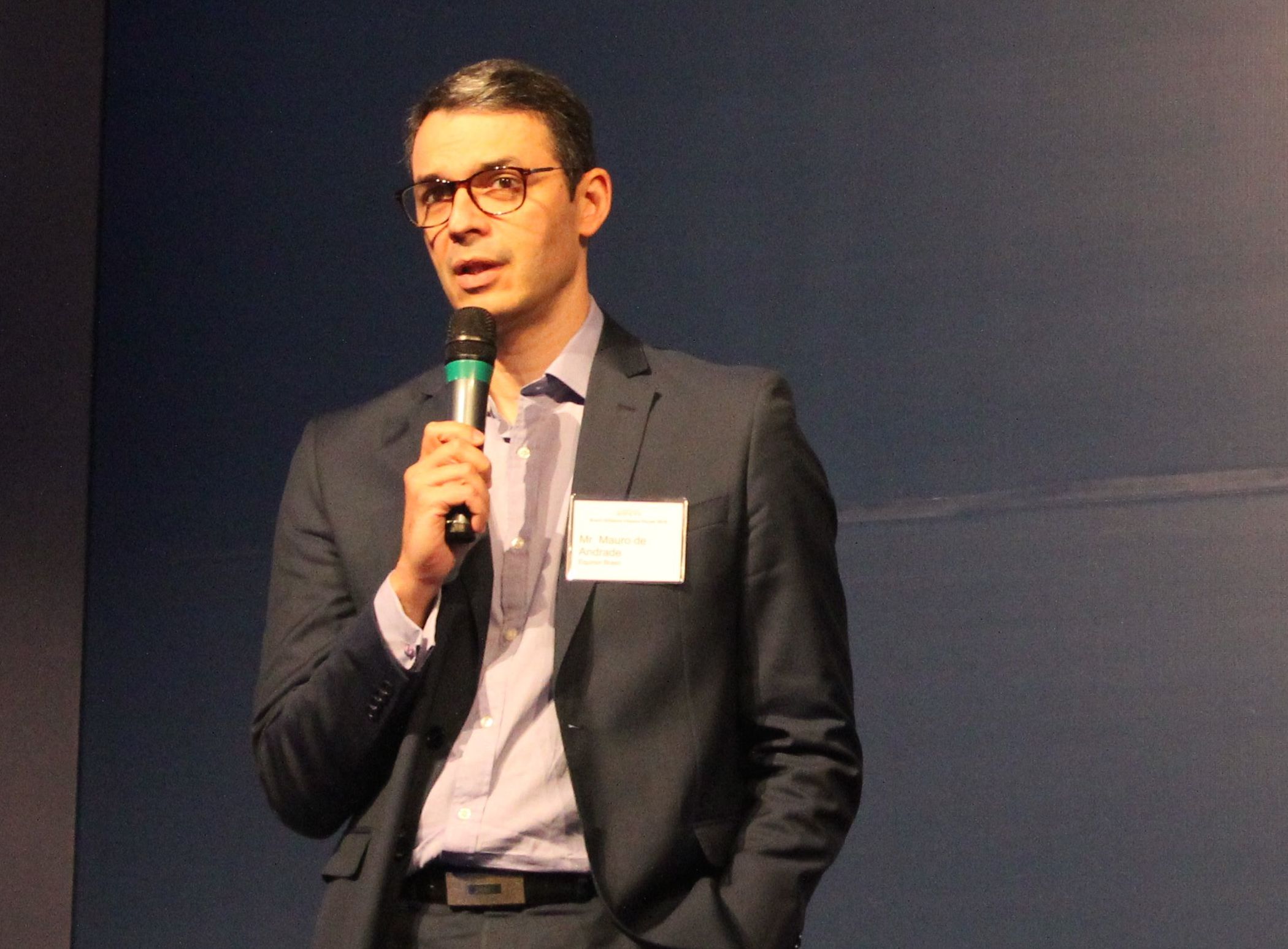 Eduardo de Azevedo expressed concerns over the terms and conditions in the contracts and a potential lack of appetite from FPSO owners on Brazilian bids.

As a new player in the Brazilian market, taxes and local flavored regulations pose the biggest challenge to MISC.

«The local complexity in regulations and taxes, market access and local content are challenging. I would also like to see regulations that use rewards instead of fines», said Faisal Lee.

«Ocyan is too a small player in this market, and we would like to see  more transparency and clarity in rules and contracts», he said.

«This is close to the busiest moment in history to MODEC. Manpower is one of the key challenges that we are going to face going forward», Felipe Baldissera said

«Disruptions may be required in our industry. I have been disappointed several times by Brazil, but right now I believe that we will see numbers in the 2012-2013 range again. But I believe in possibilities for optimization of our business», he said.

José Elias compared the Brazilian market to an abusive boyfriend that you always end up going back to, only to get beaten up again.

«But despite the difficulties, there is no better place to be for our business», said José Elias.

The forum took place at the Copacabana Palace and NBCC is one on the supporting organizations of Marine Money. The forum was followed by a post conference cocktail reception in the Noble Room of the traditional Rio hotel.