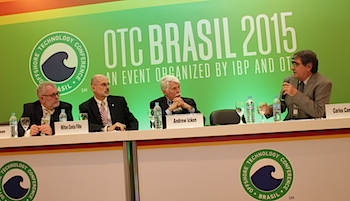 Technology is a key word for OTC participants on all levels and key trends within R&D in Norway and Brazil were discussed during OTC Brasil 2015.

From the left: Bjørn Lerøen, Milton Costa, Andrew Icken and Carlos Camerini.A seminar entitled «Public Policies and Research & Development in the Oil & Gas sector» took place on October 27, 2015, and OTC Chairman Joe Fowler himself was present to open the event.

«It was due to the technological challenges that the industry was facing that we came together to share experiences. The first Offshore Technology Conference was organized in Houston in 1969, and this is the third time we are gathered here in Brazil. A lot of top level technology papers are being presented and promoting R&D is vital to our industry», he said in his opening remarks to the seminar, that was organized by Rio Negócios for the Annual General Meeting of the World Energy Cities Partnership in Rio de Janeiro last month.

Key discussions
Brazil, Norway and the US opened the first panel on R&D providing an overview of each regional market and an outlook on the future.

OTC Chairman Joe Fowler.Oil and gas expert Bjørn Lerøen represented Norway in the panel, where he was accompanied by Mr. Carlos Camerini, superintendent at Onip, the Brazilian organization for the petroleum industry, representing Brazil, and Andrew Icken, from Houston, representing the US.

«Technology is Norway´s main contribution to the industry». Mr. Lerøen said in his opening remarks. Increased oil recovery has been a focus on the Norwegian continental shelf, according to the expert. He also complimented what Brazil has been and is doing.

«You are an inspiration and you are taking us deeper, in times where we all experience pressure for cutting costs. High cost has always been part of the problem in Norway. Today, production in Norway is declining, but we still produce almost 2 billion barrels per day and we still believe in a lot of possibilities on the Norwegian shelf. 50 years ago we drilled the first exploratory well in Norway and we started in the southern parts of the country. The industry is now moving north. In 2011, Norway and Russia reached a very important agreement on the bordering line in the north, and we are now on the threshold to the Arctic. In the efforts to secure the energy supply and make production sustainable, we will have to move into the Arctic and this calls for a big international cooperation», Mr. Lerøen said.

In his opinion, the international oil industry needs a new agenda and a stronger focus on green initiatives. High cost is a challenge but should be perceived as vital to stay innovative.

Norwegain oil and gas expert Bjørn Lerøen.Mr. Lerøen also called the oil and gas industry «a blessing to Norway», but said that now it is time for adjustments.

«Norway is looking back on 50 years and forward to the next 50 years, and we have to bear in mind that the next 50 years will be different. We have already lost 25.000 jobs in the oil and gas industry in Norway. We need to be more diversified and be smarter. We also need to work on our reputation and have to expect even greater pressure from environmentalists in the future. We might have to prepare for new taxes as the energy mix is becoming greener», he warned.

Our best card
Carlos Camerini talked about Rio de Janeiro as an R&D hub. The green concerns that Mr. Lerøen expressed, were less obvious in Mr. Camerini´s address to the seminar.

«The oil and gas industry is the best opportunity that Rio de Janeiro has, our best card. We have universities and more than 100 small and medium sized high-tech companies in Rio de Janeiro, but we need more cooperation. Companies here do not collaborate the same way as it happens in Norway or in Aberdeen, and we should work to establish a similar cluster culture here. The same companies that work side by side in Stavanger are also present here in Rio», Mr. Camerini said.

Carlos Camerini from ONIP.He also talked about the need for regular bid rounds to stimulate the technology companies even more. He would like to see the Brazilian government moving away from the single operator requirement and sees the need for policies to increase competition between local and national suppliers. Mr. Camerini would also like to see more integration between technology companies and universities.

During the second panel, four of the main representatives of Brazil’s scientific O&G research society debated the challenges of integrating the oil and gas industry with the research and development areas of universities.

WECP, the entity that unites 23 global energy hub cities from 19 of the main oil-producing countries in the world, held its Annual General Meeting for the first time in Rio de Janeiro, with the presence of 14 delegations, seven of them led by mayors. The AGM began on October 25, 2015 and featured events in the GE Global Research Center, at UFRJ Technology Park and Riocentro.

OTC Brasil took place for the third time this year, and the conference is considered  one of the world’s foremost events for the development of offshore resources in the fields of drilling, exploration, production and environmental protection.

It is organized by the Offshore Technology Conference and Instituto Brasileiro de Petróleo, Gás e Biocombustíveis. Founded in 1969, OTC’s flagship conference is held annually in Houston. OTC has since then expanded technically and globally with the Arctic Technology Conference, OTC Brasil, and OTC Asia.

The exhibition included more than 160 companies and organizations, from 16 countries this year.