Join us at Nor-Shipping 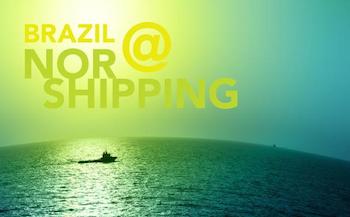 For the first time NBCC will participate at Nor-Shipping and co-host a series of business seminar at the Oslo event in June.

Nor-Shipping is the largest such event this year, not only in Scandinavia but also in Europe, and the event attracts key maritime players from across 80 countries. Shipowners, technology and service providers, regulators, financiers and many other maritime professionals will meet in Oslo to explore the future. Nor-Shipping 2015 is also the 50th anniversary of the event, and this year Brazil is receiving a special focus.

Brazil@Nor-Shipping features a program of activities that focuses on the risks and rewards of doing business in Brazil. Organizers are NBCC, the sister chamber in Oslo, BNCC, ABRAN, Norwegian Shipowners´Association (NSA), CNI, Intsok, Innovation Norway and NHO.

«It is the first time that NBCC will participate in an international event like this. We have never sent delegations to Norway, so it´s about time, and  we are forming a strong team, with representatives from important players in the Brazilian market. I believe that Brazil has to be present at these international events, and I also believe the event will be a success. It is also important that Brazilian players see how Nor-Shipping works – this great exchange of information and technology, and when Nor-Shipping is honoring us with a separate event, we have to do our part, participate and bring with us important market representatives. We are working closely with ABRAN, NSA, BNCC and others in the planning of the events. The Consulate General in Rio has been an important support, and Innovation Norway is also participating actively», NBCC president Camila Mendes Vianna says.

The big Brazilian delegation at Nor-Shipping 2015 will enhance the attractiveness of the country’s market to foreign investors, presenting a clear and transparent picture of its challenges and immense opportunities.

On June 3, 2015, a Brazil plenary session will take place, as well as Brazil industry sessions, and at night, the Brazilian delegation is hosting a reception. On June 4, a legal seminar and business meetings are on the program.

During the plenary session, participants get an updated perspective of Brazil, with all its challenges and opportunities highlighted. NHO chairman Tore Ulstein, president of the Norwegian Shipowners´Association, Lars Peder Solstad and NBCC president Camila Mendes Vianna are among the many profiled speakers.

The two industry sessions on June 3 will address what it takes to succeed in Brazil, and participants will hear from diverse players such as oil companies, suppliers and shipyards, as well as companies with offshore support vessels, shuttle tankers and drilling rigs. Participants will also learn about the Brazilian legal framework and certification process, among other challenges unique to the country.

What does it take to open a Brazilian Shipping Company (EBN), and how is it possible to comply with the complex Brazilian tax system? These are questions asked during the legal seminar on June 4, 2015.

«The main goal of our participation is to strengthen and foster the relationship between the Brazilian and Norwegian business community. The Brazil@Nor-Shipping seminars will present a clear and transparent picture of the country with its challenges and immense business opportunities of the oil & gas and maritime industry.  Nor-Shipping is the most important and prestigious international shipping exhibition and conference in the world and Norwegian Shipowners´Association is its main partner thus enabling ABRAN, the first NSA branch established outside Norway, to coordinate with NSA and Nor-Shipping the ambitious initiative of Team Norway of building a platform focused on Brazil, during Nor-Shipping 2015. President Dilma Rousseff was reelected for a new 4 years term and a new cabinet has been formed setting up a new economic scenario for the future. It is the perfect timing to bring to Norway the new perspectives of the country”, Ricardo Cesar Fernandes, Executive Director of ABRAN, says.

According to Norway´s Consul General in Rio de Janeiro, Mrs. Helle Klem, Nor-Shipping is a major maritime event attended by leading industry representatives, policy makers and government officials from all over the world.

“With its 50th anniversary this year’s program is extensive and as important as ever and even includes a special Brazil @Nor-Shipping segment. Shipping and offshore activities are key drivers in the strong economic relationship between Norway and Brazil. It is thus with great enthusiasm that we welcome the Brazilian delegation to Nor-Shipping, taking place in Oslo on June 1-4. We are very pleased and honoured to have a number of high ranking representatives both from Brazilian authorities and business, and we are looking forward to important and interesting days that will I am sure contribute to further strengthening of our relationship”, the Consul General says.

According to the Nor-Shipping website the maritime offshore industry has been a key driver in the relationship between Norway and Brazil. Thanks to a long history of doing business together, a shared philosophy and approach as well as the exchange of knowledge and expertise, the oil nations of Norway and Brazil have developed strong economic relations that span numerous industries.

Norway, home to the world’s most modern and second largest fleet of offshore vessels, is a natural location for an event that presents this growing segment with a stage to highlight and debate its issues and opportunities.