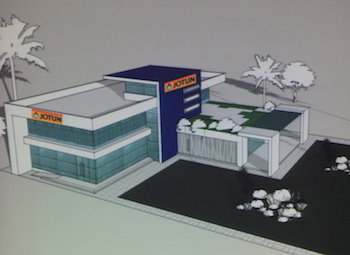 State secretary Julio Bueno and Jotun Vice President Svein Stolpestad attended a tour at the construction site on June 10, 2014, when the construction of Jotun´s first factory for marine coatings in Latin America was commemorated in Itaborai, Rio de Janeiro.

Jotun is a world-leading manufacturer of paints and coatings, present in 70 countries, with more than 9500 employees around the world.

The construction is already in a final phase and production is scheduled to start in March 2015, with 100 employees and a capacity to produce 10 million liters per year of solvent-based paint.

Jotun is already supplying some of the main naval projects in Brazil, like the P-74, the P61 and the company also has a maintenance contract with Transpetro for the whole company fleet.

Established in Brazil in 1998, Jotun, until now, did not have an industrial plant in the country, making use of facilities in partner firms to produce a part of its products in Brazil. The company has a consolidated position in the Brazilian market for paint, focusing mainly on the maritime, offshore and industrial segments. Jotun operates mainly in the oil and gas sector, with products such as anticorrosive primers, polyurethane top coats and antifouling paint.

Photo courtesy of Jotun.“Jotun is the world´s biggest supplier of marine coatings for ships. Today we have more than 40 factories around the world, and we are now looking to build up our organization in Brazil. We expect the consumption of paint to grow here, and this is why Brazil is important to us”, Jotun Vice President for Business Development & Strategy, Svein Stolpestad, said during the commemoration.

“The petroleum sector is very important to the state of Rio de Janeiro, and when a company like Jotun chooses to establish in Itaborai, a region that needs investments, and wants to produce a product that we do not have in the local market, the only thing I can do, is say thank you! I would also like to assure you that the state government of Rio de Janeiro is here to assist you. You can count on us. It is a great pleasure for me to be present here today”, Mr. Bueno said.

In her address, Consul General Helle Klem talked about the historical ties between Norway and Brazil, and called Jotun a worthy ambassador for Norway in Brazil.

“Jotun is a company all Norwegians know”, Consul General Helle Klem said in her address.“Today we celebrate the new factory, the first production site in Latin America, a factory of great importance to the local community, and a project that reflects the growing Norwegian presence in Brazil. The pre-salt discoveries boosted Norwegian interests in Brazil, and today Norway is the 7th largest investor here. This is quite remarkable given the size of Norway”, Mrs. Klem said.

Norway has invested a total of 25 billion USD in Brazil and most of it has been invested the last 5 years – and in the oil and gas sector. According to the Consul General there are currently 157 Norwegian companies operating in Brazil, employing a total of 18.750 people.

“And there is more to come. Norway has the competence and the experience that Brazil needs, and the two countries complement each other in many ways”. Mrs. Klem said.

BNDES funding
The delegation visited the construction site before they were given presentations about the project, that also has BNDES funding. In 2013, BNDES approved R$ 69 million in financing for Jotun Brasil Importação Exportação e Indústria de Tintas Ltda.

Project engineer Renan Chriman presented the project to the delegation at the construction site. “We are using local suppliers and consider installing a unit for research and innovation here in the future”, Mr. Chrisman said.The project represents a total investment of 110 million BRA.

“We make paint. Let me tell you why this is important. Every second 5000 kilos of steel disappears because of rust, and 40 percent of the world steel production is for replacement. We produce protection for ships and platforms”, Mr. Stolpestad explained in his presentation.

Jotun produces protective coatings, like the one used on the Eiffel tower, but also for the offshore and energy sectors and for infrastructure projects. Jotun also makes marine coatings for ships, vital for the reduction of fuel consumption, powder coatings and decorative paint.

According to Mr. Stolpestad, local development is important to Jotun.

“We want to grow, but Jotun does not buy companies, and we call this strategy «organic growth». We want to develop the local market, and have a selective approach to the different markets, like Saudi-Arabia, China and Brazil. We must do it the local way”, Svein Stolpestad explained.

From the left: Rune Andersen, Helle Moen, Helle Klem, Svein Stolpestad, Julio Bueno and Audir Santana.The project is part of a much broader initiative, which aims at increasing the capacity of the company, to meet the demand in the Brazilian market for finishing paints, focusing mainly on the oil and gas segment (maritime and offshore), representing 75 percent of these sales in Brazil.

Ferran Bueno is the president of Jotun Brasil: