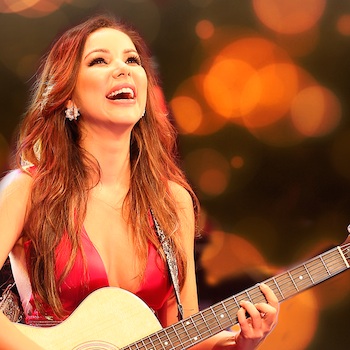 Brazilian artist Liah Soares is attracting the attention of a growing Norwegian audience in Brazil.

The talented Brazilian singer was vital in making the Brazilian summer party in Oslo during Nor-Shipping a huge success, and several representatives of the Norwegian-Brazilian business community in Rio de Janeiro were present when Soares released her first DVD, after 11 years as a singer and songwriter – with four albums and one EP on her curriculum.

While her first album was released in 2003, the DVD «Liah Soares Ao vivo no Theatro da Paz» was launched during a release party at Miranda in Rio de Janeiro in July. The DVD is a collection of songs and experiences from her career so far.

«This is definitely the highlight of my career, and a dream I have had since I was very young. Performing at the Theatro da Paz in Belem and producing this DVD has a very special taste. But to me as a musician, the most important is to remain creative and healthy. My dream is to keep making music for the rest of my life, and what I find most rewarding is to see that my music is important to my fans. There is a spiritual side to music. It can help you overcome difficult moments, and I feel chosen, I feel privileged to be able to do this for a living», Liah Soares tells NBCC / Nordic Light in this interview.

Nordic Light meets her in a sidewalk restaurant in Leblon for a glass of fresh juice, and as Liah is talking about how much the warm feedback from her fans means to her, a young woman politely interrupts and asks to take picture with Liah.

«This is exactly what I was talking about, and this affection I feel from people, makes me feel very grateful. This is what motivates me and helps me overcome whatever difficulty I might be facing.»

The Norwegian connection
But what is it about Norway for this Brazilian girl from the interior of Pará?

«My boyfriend is Norwegian, and last year I had the opportunity to spend Christmas in Norway. I was just delighted with the country and the nature. I had never seen snow before and the northern lights were just magic, simply the best Christmas present I could get. As I come from a region close to the Amazon forest, I have a special connection with nature».

Through her boyfriend, Liah Soares met the organizers of the Nor-Shipping event, and she says the invitation to perform in Oslo made her very happy.

«I played with Norwegian musicians, so you could call it a Norwegian-Brazilian musical exchange. I was surprised by how well they played Brazilian samba, and I performed a song by A-ha during the show. Good music never gets old, and music is an universal language with the ability of bringing people together.»

The Brazilian summer party during Nor-Shipping took place at «The Thief», one of Oslo´s news and most exclusive hotels. Liah and her Norwegian musicians have no shows on the agenda yet, but keep in touch and intend to play together again in the future.

«We were invited to perform at other events during Nor-Shipping and at the hotel whenever I return to Norway», Liah says.

She expresses fascination with the polite Norwegians and how well organized and clean everything seems to be in the Scandinavian country.

«Even with snow, everything works the way it is supposed to! I loved the tulips in the streets and squares of Oslo, the sweet bun you call «bolle» and the food that my mother in law makes, the Christmas meal you call «ribbe», Liah says.

Early start
Soares left her hometown Sao Domingos do Araguaia, in the state of Pará, when she was only 14 years old. 12 years old Liah won her first singing contest, and music became her passion when she was still only a toddler.

Photo courtesy of Liah Soares.«I won a scholarship do study classical guitar in Santa Catarina and went to live with family in the south. After finishing high school, I returned to Pará, but as I wanted to follow my dream of becoming a professional musician, I decided to move to Sao Paulo where I made a living playing in bars and taking odd jobs», Liah says.

But the difficult years far away from home paid off.

«I am blessed with a gift, the gift of composing music and saw many established artists record my music. This was how I survived.» In 2000, TV host Angelica recorded one of her songs, and artists like Wanessa Camargo and Sandy & Junior have also recorded her music. In 2003, Liah Soares released her first album.

«I learned a lot from following the career of other artists, and little by little I conquered my space. I know how hard it can be, and keep my feet on the ground. It is a learning process.»

Door-opener
There is no doubt Liah Soares has learned a lot. In 2013, Liah Soares caught the headlines as first-runner-up in the Brazilian TV show «The Voice Brasil».

«The Voice was a challenge to me. I had recored several albums, but was still more recognized as a composer, and I definitely conquered a new audience. The Voice was a great legacy to my career that opened new doors. People pay more attention to me today», Liah says.

After the show, she recorded one of the theme songs for the prime time soap opera «Em familia». Liah Soares calls her own musical genre «MPB pop». Renato Russo, Raul Seixas and Norah Jones are among her many musical role models. Soares is now touring Brazil to promote the new DVD, but next year, she will start working on a new album.

«I have always been influenced by a mix of artists and music genres, and nowadays, you can mix as much as you like. My origins are from a school of blues and jazz, and to me, it is a good mix.I love both singing and composing. Creating music is wonderful, but also something very solitary. Performing on stage is marvelous and I love  the exchange of energy with the audience. They are both forms of expressing yourself that I adore.»

Soares also has international ambitions, and in 2008 she won a prize during a music festival in Frankfurt, Germany.

«I dream of making Brazilian popular music even more known abroad, and would love to go back to Norway.»