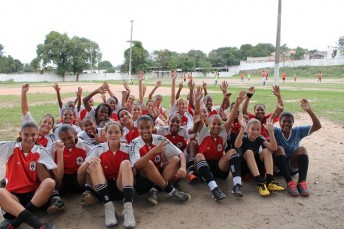 For the very first time, the girls from Karanba are going abroad to dispute 3 championships in Norway, Sweden and Denmark. They are very grateful for the warm support from the Norwegian community in Brazil, and the girls guarantee they’ll do their very best to return to Brazil with 3 gold medals in the luggage.

“We have made history here in Brazil, and want to do the same abroad. We are going to Norway to make our way of playing football even more respected and admired. It might even open some new doors for those of us who wish to make a career as professional football players”, says Debora Oliveira (18).

A total of 20 girls from Karanba are leaving Vista Alegre, São Gonçalo on July 4 and they will only return in the beginning of August. The youngest in the group is 14 and the eldest is 20. Several teams from Karanba have been traveling abroad since 2007, but this year, the girls are going for the very first time

“Our philosophy is to offer the same activities to both boys and girls, and ever since we started the girl team in October 2011, our ambition was to take the girls abroad in 2013. They certainly deserve it”, says Tommy A. Nilsen, former football player and founder of Karanba.

In Scandinavia the girls are going to dispute Dana Cup in Denmark from July 8-13, Gothia Cup in Sweden from July 14-20 and Norway Cup in Oslo from July 25-August 5.

We met with four of the players during a training session in the end of June, and Debora Oliveira and her co-players Yasmim Nogueira (17), Letícia Rimes (18) and Claudia Ambrósio (18) were all very excited about the trip.

Hard work The last month before departure, the team has been training five days a week – Monday to Friday from 15-18. They are determined to return to Brazil with 3 trophies.

“I’m confident we have a chance to win all 3 cups. We are extremely focused, united and we have been working hard during training to improve ourselves. But we do it with love”, Claudia and Debora say.

Adaption The girls arrived in Norway on July 5, and are going to spend a couple of days in Hakadal to adapt. They think the time difference is going to be difficult to get used to.

“The food, the way people behave, the language and even the way to play football are other things we have to adapt to. They play in a more technical way. We have more personal abilities with the ball”, says Yasmim.

“Football is obviously in focus on these trips, but the idea of Karanba is to use football as a way to help these kids grow as human beings. For me as a Norwegian, it is important to present Norwegian and Nordic culture to them, and we have a very diversified program. We want to give the players experiences for life”, Tommy A. Nilsen says

The girls are dreaming of a career as football players.

“ I would like to visit a Norwegian football club to see how it works there. There are few opportunities for women in Brazil and a lack of investments and commitment to female football. Clubs like Santos are closing down the female teams. I think they use too much on the men. Some players earn thousands of reais. It would have been better if everyone was given a chance”, Claudia says.

“We’ve been told that female football players are more valorised and respected in Norway, and would like to see this with our own eyes”, Yasmim says.

“I would also like to continue playing football, but even more I would like to go to university and get an education”, Leticia says.

Warm support The girls are very grateful for the support from the Norwegian community in Rio de Janeiro, and feel privileged.

“I had the chance to take course, and the people from Norway checked in on me and made sure I was doing well. If I had difficulties, they helped me out. We feel appreciated and we are very grateful for the time and money they are investing in us. They want to see us improve, not only as football players, but more importantly as persons”, Yasmim and Letícia say.

“Their approach is completely different. Nobody here cares if you have eaten and how you are doing in school. The Norwegians do not only contribute financially, they seem to really care. I left my mom and my family in Minas Gerais. My dream is to become a football player, and here they gave me a chance. I’m very grateful”, says Claudia.

“Karanba is our family”, says Debora.