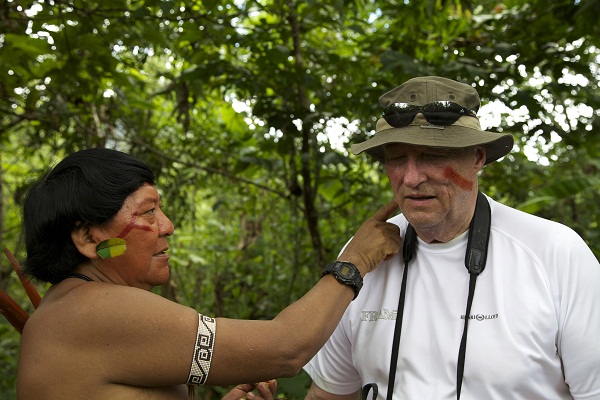 At the invitation of the Rainforest Foundation Norway, the King paid a visit to Daví Kopenawa, a leader and spokesman for the Yanomami, and the village of Demini in the Brazilian rainforest along the border of Venezuela.

The King received a warm welcome in Demini with speeches by village elders. His accommodations comprised a simple hammock under the same roof with the 120 inhabitants. The village consists of a large, circular structure with an open courtyard in the middle.

From Monday, 22 April to Thursday, 25 April, King Harald lived with the Yanomami people and was afforded a unique glimpse into the tribe’s culture and way of life. He had the opportunity to see how the Yanomami gather what they need from the rainforest that surrounds their village.

“This has been a dream of mine ever since my time with the World Wildlife Fund. So when the opportunity arose, I took it,” says King Harald.

“A fantastic trip”
During his stay, the King was served traditional food and had the chance to accompany some tribesmen into the forest to see how they employ animal calls as a hunting technique.

“It was fascinating to hear how they can imitate all of the animal calls found there as a way of luring in their prey; everything from jaguars and monkeys to parrots,” says King Harald.

The King was able to absorb his impressions from the rainforest in peace and quiet, and participated in the daily lives of the tribespeople. An interpreter helped the King to speak with the villagers, and young and old alike crowded around him when he showed them photographs from his own family album. On his departure, he was draped with parrot feathers around his shoulders as a special mark of honour.

“This has been a fantastic trip. Absolutely fabulous,” says King Harald.

Heard their dramatic history
The Yanomami are the largest and best known group of indigenous people living in the Amazon in much the same way as their ancestors did. The Yanomami territory was officially recognised by the Brazilian Government in 1992.

“In the late 1980s their area was invaded by several thousand gold-diggers, and 15 per cent of the population died of disease and violence over a two-year period,” explains Mr Dag Hareide, Director of the Rainforest Foundation Norway.

The support provided by the Rainforest Foundation Norway to the Yanomami people over many years has been used to provide education and assistance for the tribe’s own organisation, Hutukara, among other things.

“His Majesty The King expressed great satisfaction over the results of the Norwegian support. The Yanomami were also proud and pleased to be able to welcome the Norwegian King to their village. This is the first time that a head of state has visited the Yanomami territory,” says Mr Hareide.