Ladies in the lead 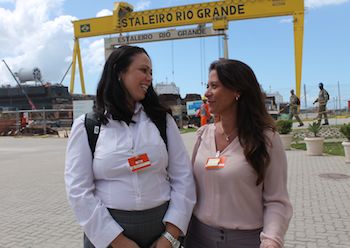 Two hardworking women are heading two Norwegian companies that have found the path to success in the south of Brazil.

The ongoing shipbuilding projects in Brazil are getting attention around the world, says Leila Trabbold (to the left). By her side, Suzana Sandoval Barros of Palfinger Dreggen do Brasil.A Norwegian delegation visited Rio Grande do Sul, shipyards and the Naval Cluster Fair in Rio Grande from March 10-14, and representatives from the two companies Norsafe and Palfinger were both present in the 15 man strong delegation to the south.

The story about the Norwegian crane producer Palfinger Dreggen, former Bergen Group Dreggen, has been used as an example of success on several occasions. Lifeboat manufacturer Norsafe is now following in the footsteps of Palfinger, and enjoying great success in Brazil, by forming alliances with a Brazilian counterpart.

Norsafe is currently the world´s largest supplier of lifesaving equipment, and also offers service and maintenance on life-saving systems for the merchant and offshore markets.  In 2013, Norsafe acquired the Brazilian company RIB Offshore, at the time its main competition in the Brazilian market.

“Norsafe has only been present in Brazil since 2011, and the company has grown very rapidly. The number of employees has increased from 10 in 2012 to 60 today, among them production workers, service engineers and technicians. Now RIB Norsafe will become the first Norwegian company to produce lifeboats in Brazil”, says Leila Trabbold, sales manager at Norsafe.

RIB Offshore is located in Sapucaia do Sul in Rio Grande do Sul, and Mrs. Trabbold decided to join the Norwegian mission to Rio Grande to make new contacts, strengthen existing relations and get more information about the market in the region. Rio Grande is a focus region to RIB Norsafe, and the company has already been awarded contracts for the lifeboats on the FPSOs P66, P67, P68, P69, P70, P71 and P72 FPSOS, under construction at the Estaleiro Rio Grande in Rio Grande, RS.

Leila Trabbold, Gulbrand Wangen (Intsok), Suzana Sandoval Barros and Åge Eikså (Subsea North). In the back; Jan Kleivene (Eaton Hernis) and Roney Parente (Marine Aluminum).The first Norsafe service base in Brazil was located in Salvador, but now the Brazilian headquarters is located in Niteroi. Approximately 20 vessels are being serviced monthly by Norsafe.

A high quality product and a highly qualified staff are key elements to the company´s success, according to Trabbold.

“Through the acquisition of RIB Offshore we intend to exchange technology, improve existing models and increase the local content offered to the Brazilian market. It is important to find a local partner, and now we are bringing over all the equipment needed to produce locally what we used to produce in Norway and China. The demand in Brazil is increasing, and the market is huge. The company is investing heavily in Brazil and sees this as a great opportunity and a priority market”, she says.

“My first task when I entered the company was to find a Brazilian partner. I visited 10 companies before we decided on Koch Metalúrgica”, Mrs. Barros explains.

The vice-governor of Rio Grande do Sul, Mr. Beto Grill (to the right), has taken a personal interest in the Palfinger-Koch project and will visit Palfinger in Austria in April together with Suzana Sandoval Barros.The joint venture has rented a property by the Rio Guaíba in Porto Alegre, and is now waiting for the operational licenses. Suzana Sandoval Barros hopes to start the assembly and testing of the cranes at this facility within a few months

In February last year, Palfinger Dreggen landed a very important contract with the Jurong shipyard in Espirito Santo, for the delivery of 28 offshore cranes for the seven drill ships being built at this shipyard. The contract has a total value of 100 million USD. The cranes will be manufactured by Koch Metalúrgica in Cachoerinha, RS, and assembled and tested in Porto Alegre. 150 employees are currently working on the cranes for the Jurong project.

The company was awarded another contract by Transpetro for 16 cranes, and Mrs. Barros reveals that she is close to closing new contracts. The company has also established a structure for services on the cranes they provide to clients in Brazil.

“You need to be persistent to succeed in the Brazilian market, but without exaggerating. You also need to keep yourself informed and updated on all the opportunities and licitations. Nothing will fall from the sky, and it requires hard work”, Suzana Sandoval Barros says.

A step ahead
The success of the two companies was noted and mentioned several times during the visit to Rio Grande do Sul in March.

“We would like to see more companies doing what Palfinger and Koch have done”, Aloísio Nóbrega, vice-president of the regional development and investment agency (AGDI) said during a presentation he gave.

The fact-finding mission to the south was organized by Intsok and Innovation Norway. Gulbrand Wangen, the Intsok regional director for Brazil, says finding a local partner is “a good market entry strategy”.

“This is something Norsafe and Palfinger have done with great success, and the cooperation with a Brazilian company enables them to deliver local content. This is extremely important”, Mr. Wangen says.

“The fact that Palfinger-Koch is a local crane manufacturer gives them a stronger position in the market. They are a step ahead of rivaling companies, and get easier access to the local supply chain”, Mr. Wangen says.

Ladies in the lead