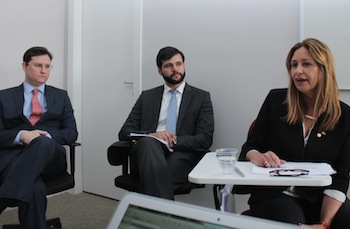 From the left: Rafael Baleroni, Lucas Leite Marques and Camila Mendes Vianna Cardoso.A recent court decision on the validity of foreign maritime mortgages in Brazil was subject to intense discussions during NBCC Legal Committee meetings in Rio and São Paulo.

President Gustavo Schmidt presented the CBMA to the participants and he also talked about the recent developments of arbitration involving the public administration and governmental entities in disputes with private parties in the port sector, in view of the enactment of Federal Decree 8,465/2015.

Mr. Schmidt briefed the audience about the history of arbitration law in Brazil and the developments of the centre. The CBMA was created in 2002, but has been revitalized since Gustavo Schmidt took over as president in 2014. Mediation and arbitration is an alternative to taking a case to court. On average it takes less than 18 months to resolve a dispute via arbitration, and this alternative can have a positive effect on investor confidence as it could contribute to increasing the perception of predictability and security for investors.

Mr. Gustavo Schmidt.«The Rio de Janeiro business environment needs healthy ways of conflict resolution, and the centre today has advisors and arbitrators with expertise in a variety of fields. CBMA also holds a Maritime and Port Law Vice-Presidency dedicated exclusively to arbitration and mediation in these specific fields, and the CBMA here in Rio is the only arbitration chamber with this kind of focus and expertise. Arbitration is a more flexible process where the parties can choose their arbitrators, all highly qualified in the field in question», he said.

A leading case
On a second panel, Camila Mendes Vianna Cardoso from Kincaid presented a case study on the validity of foreign maritime mortgages in Brazil.

This presentation was followed by an open debate among all participants, in respect to the legal aspects and effects of the court decision, how the industry can be affected and the possible ways forward.

The recent decision rendered by the São Paulo Court of Appeals has caused repercussions in the international market as the decision ruled that the foreign maritime mortgage would not be valid in Brazil.

The case is considered a leading case and involves  questions about the registry of a vessel, registered under flags of convenience in Brazil. The case also involves several international conventions and will have impact on financing structure or guarantees for vessels intended to operate in Brazil.

The case involves a FPSO built by OSX 3, a company located in Holland. The construction of the FPSO was financed with funds from the Norwegian Stock Exchange in Oslo and Nordic Trustee, through a mortgage of USD 500 million.

But OSX 3 is also a debtor of BTG Pactual, by virtue of a bank guarantee executed due to an engineering contract for the construction of the FPSO.

The details of the court decision and its implications were comprehensively discussed by the committee. Representatives from the Brazilian Navy, DPC and the Brazilian Admiralty Court were also present at the meeting, as well as representatives of international registries, banks and shipping companies.

«Today there are 525 vessels with flags of convenience in Brazil, 50 of these have Liberian flag and 80 percent of these have mortgages. The use of flags of convenience is a part of our reality here. This is about wether foreign mortgages are valid in Brazil and a lot is at stake. As a consequence of this decision, banks will be reluctant to give guarantees or loans to vessels that will operate in Brazilian waters. This is not good for the image of Brazil, as a country where you have no guarantees. We have to define what are the requirements for foreign mortgages to be valid in Brazil, as registration at Maritime Court is impossible and against the law. We have to figure out what can be done to mitigate risks?» Camila Mendes Vianna Cardoso said in her presentation.

You can also read an article on this case, written by Rafael Baleroni and Victor Falcone from Souza Cescon published in the latest edition of the magazine Nordic Light.

New committee
A similar event took place in São Paulo on June 15, 2016, where NBCC took the opportunity to launch the new Legal Committee São Paulo, with Juliana Meyer Gottardi from PNST as Coordinator.  The Legal Coordinator in Rio is Lucas Leite Marques from Kincaid.

«The OSX 3 case is an obvious concern for financiers and indirectly for foreign operators and the Brazilian offshore oil industry», he said.

From the left: David Osborne, Lucas Leite Marques and Camila Vianna Cardoso.In a separate panel, the current Brazilian scenario and the oil and gas sector was discussed by Professor Marcus Vinicius de Freitas, Professor of Law and International Relations at the Armando Alvares Penteado Foundation, and Chief Advisor for Emerging Markets at Providence Group.

«Currently, people are unhappy because the economy is doing poorly, and the Rousseff administration was not business friendly. That left the current president with several challenges», he said, and listed eight such challenges:

«Michel Temer must restore trust in the economy, keep the Lava Jato operations and «survive», reorganize governmental finances, engage in the world, strategic thinking on the relations between China, the US and the EU, as well as reshaping the Itamaraty, reduce the Brazil cost, heal Brazilian institutions, improve the infrastructure and conduct political, tax and social security reforms. It is a lot of work to be done, but we cannot expect any miracles in view of the short time»

He argued there are several reasons why investors should still believe in Brazil.

«Brazil is a giant by its own nature, and natural resources are one reason The country has a young workforce, an urban population, commitment to democracy growing energy consumption, self-sufficiency and is a country that still needs to grow», Mr, Freitas said in his presentation.

Looking ahead he finds it unlikely that Petrobras will be privatized and he called the local content rule an impediment for growth.

«Changes will be necessary to address these challenges», he concluded.

«NBCC has been performing a great job in stimulating the debates on relevant subjects of different sectors of the market, through their working committees. The success of the recent events promoted by the Legal committee both in Rio de Janeiro and São Paulo, with an active participation of the members of NBCC, authorities and other representatives of the industry, demonstrates that the Legal Committee is fulfilling its objectives and bringing a positive contribution to the legal community. Also, we cannot avoid mentioning the relevant support of the Brazilian Center for Mediation and Arbitration (CBMA) and the Federation of Commerce of the State of São Paulo (Fecomercio SP) for promoting both events and for contributing with the debates on ship finance, oil & gas and arbitration matters, which are of crucial importance for our economy and for the international commerce. »