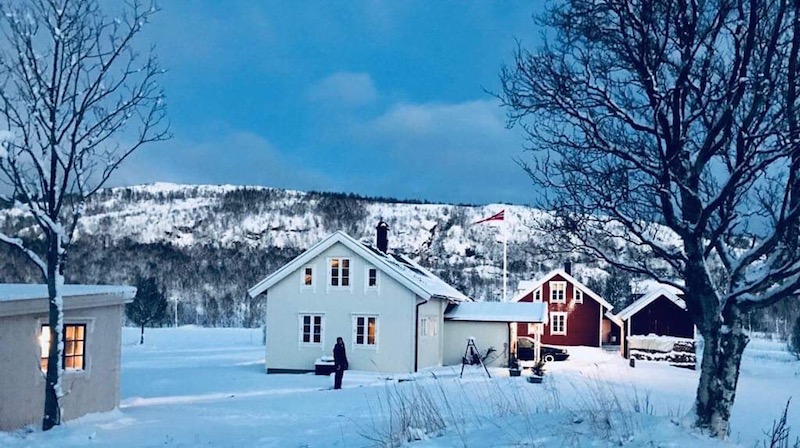 Although we are celebrating the exact same holiday, Christmas traditions and festivities have a lot of differences in Norway and Brazil. 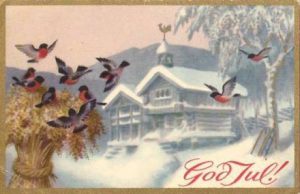 The first and obvious difference is of course the snow! While in Brazil, soaring temperatures have hit Rio de Janeiro this last week,  snow is usually the backdrop around Norway, creating landscapes like those of a charming, old Christmas card.

As December is the darkest month of the year, Norwegians also like to decorate houses, gardens, streets and parks with light.

Mutton and pork
Food is an important ingredient in the Christmas celebrations. In Brazil, the Christmas supper is usually served late at night. In Norway, families gather around the dinner table around 17 pm. Many go to mass on Christmas eve, even though they do not usually frequent their local church. Norwegians also get together for the next days of Christmas, and both the 25. and the 26. of December are public holidays. The school vacation during Christmas usually lasts about 14 days, from December 20 to about January 4.

In Norway, the typical menu is «pinnekjøtt» or «ribbe» – that is dried mutton ribs or roasted pork ribs. Sauce, potatoes and vegetables like carrots and Brussels sprouts are the most common side dishes.

Given Norway’s ancient traditions as a fishing nation, Christmas along the coast is unsurprisingly celebrated with riches from the sea. In the south, cooked cod has been a favorite for Christmas Eve, preferably served with butter sauce.

Lutefisk is also a traditional dish. It is made from aged stockfish and lye, giving a gelatinous texture.

MORE ABOUT FOOD AND TRADITIONS

Some have turkey, but the Brazilian favorites like chester and bacalhau, are not that common for Christmas in Norway, and the bacalhau Norwegians like to eat, is is fresh, not salted and dried. 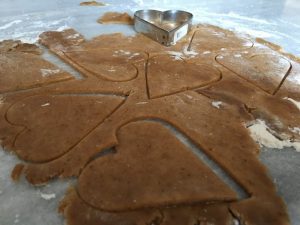 Seven kinds of cookies
Another very important part of the preparations for Christmas, is making cookies. Earlier, you were expected to make at least seven kinds of cookies and sweets before Christmas. The «kransekake», or tower cake, of Consul General Sissel Hodne Steen is famous among Norwegians in Rio de Janeiro. A favorite among the kids is of course the gingerbread cookies, known as pepper cookies , «pepperkaker» in Norway.

Ester Arna Haarr is the manager of the Norwegian Church in Rio de Janeiro, and host to many Christmas events for Norwegians in town.

She has always been very fond of making Christmas cookies and sweets, and when she lived in Brazil in the 1980-s, she was known in the neighborhood that started preparing for Christmas as early as in September/October.

«It is too hot to bake cookies in December here in Brazil, and I think people found me a bit weird at the time. Today, Christmas is more about being with family to me personally», she says. Ester and her husband Palle, who is the chaplain of the church, has five sons, and two of them are arriving in Rio de Janeiro to spend Christmas these days. 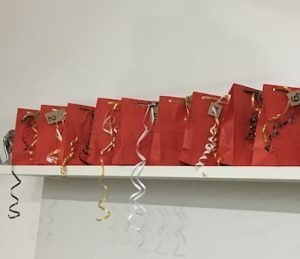 Christmas calendar with one gift for each day.

A full month of gifts
But before we get that far into the month of December, we have to mention the Christmas Calendar, not at all common in Brazil. From December 1 to December 24, Norwegian children have a dedicated calendar, usually with chocolate treats or small gifts, and they open one gift every day until reaching Christmas eve, as a way of shortening the wait for Christmas to arrive.

Making your own Christmas decorations, is another dear activity in Norway, and this year´s Christmas workshop in the church attracted about 25 people in the beginning of the month. Paper angels and Christmas trees were among the decorations made.

Consul General Sissel Hodne Steen is used to spending Christmas abroad and to adapting traditions to country and climate. This year she will spend the holiday in Brazil with her family, but she has also spent Christmas in countries like Tanzania and South Africa.

«Some traditions we hold on to, like decorating the Christmas tree on December 23 in the company of friends and family. On Christmas eve we put on our best clothes and go to church – be it in an African congregation where live, bleating sheep are part of the Christmas play – or in a more traditional mass in Norway with children running around. Christmas is being together, around the dinner table, regardless of the menu as we have eaten Norwegian pork ribs, wild boar roast or Brazilian churrasco», she says.

The perfect Christmas tree
Sissel Tjosaas is the head of the association «Norsk i Rio». She is also married to Dicrector of Innovation Norway in Brazil, Stein-Gunnar Bondevik. 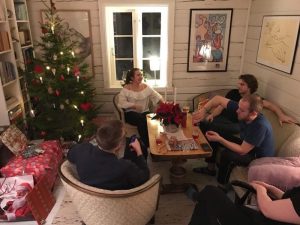 «My dearest Christmas tradition is when the whole family gathers at our old family farm a few days before Christmas, to go out in the woods to choose and cut down our own Christmas trees. All are very eager to find the perfect tree. Afterwards we gather around a bonfire, eat sausages and have hot chocolate. When we get back to the farm, we are usually very cold, and we gather around the fireplace to relax and warm up frozen toes and fingers. We also have rice porridge and make «pepperkaker», we exchange presents and best wishes for the new year before we all go home. Its a big fuss, but all very nice», Sissel says.

Another difference we find in the contents of the gifts under the Christmas tree. Skies, snow slides and skating equipment are common gifts in Norway. In Brazil, havaianas and beachwear are obviously more natural presents.

With these insights into the Norwegian Christmas celebration, NBCC wishes you all a merry Christmas and a happy new year, god jul og godt nyttår, feliz natal e um próspero ano novo – the Norwegian way, the Brazilian way or simply your way!