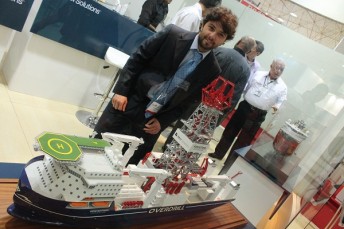 There was an abundance of innovations displayed and newcomers to meet at the Brasil Offshore 2013. A new generation drill ship from Fincantieri and Norwegian multinational Aker Solutions was getting a lot of attention from visitors at this year’s expo.

Brasil Offshore is the third biggest event of this kind in the world, and in 2013, the event attracted more than 51,000 visitors and 720 exhibitors. Several Norwegian companies were among the exhibitors at the seventh edition of the exposition, that took place in Macaé from June 11-14.

Aker Solutions, a leading provider of subsea equipment and services in Brazil’s offshore market, was present with one of the biggest stands among the Norwegian companies, and one of the models displayed at the stand was receiving a lot of attention during this year´s expo: A brand new drill ship design developed by Fincantieri Offshore and Aker Solutions.

Students were taking pictures, and colleagues in the subsea and drilling industry asking questions to satisfy their curiosity.

Next generation
Currently, offshore exploration and operation is moving into ultra-deep waters. Large discoveries have been made along the Brazilian coast, in the seabed beneath a layer of salt that is up to 2 kilometers thick. Ultra-deepwater exploration demands innovative solutions, and this particular vessel design, of the overdrill class, is being called the next generation of drill ships.

“It is actually quite a revolution, and brand new to the Brazilian market”, says Andrea Piantini from Fincantieri Offshore, one of the largest shipbuilding groups in the world. Earlier this year, Fincantieri acquired Vard, former STX OSV, and the Italian company also has ship designer Ulstein Sea of Solutions among its business partners.

“This particular drill ship was developed together with Aker Solutions, which is the supplier of the drilling equipment on board, and you will find nothing like this on the market today. It is a prototype, the first of its kind and you can say it is tailor-made for operation on the Brazilian pre-salt blocks”, says Marco Cardinali of the offshore business unit at Fincantieri Offshore, and one of two Fincantieri representatives present on the stand to explain the distinctive features of the vessel design.

50.000 feet
According to Mr. Cardinali, the design will enable drilling contractors to operate in water depth up to 12,000 ft, with a total drilling depth up to 50,000 ft.

The vessel was designed around the drilling system, maximizing its integration with the hull, and the design also features an increased variable deck load capacity.

The design was first presented to the market at OTC in Houston in May.

“The vessel is getting a lot of attention here at the expo, and the interest from the market has been great”, says Cardinali.

New kid on the block
John-Steinar Pedersen represents a different kind of «innovation» at the expo. His company Multi-Industrier is working hard to establish in the Brazilian market, and Mr. Pedersen and his colleagues were working the expo to make the right contacts. The company offers services within surface protection and treatment, flooring and interior work, cleaning, isolation, access and inspection.

“We have opened an office in Macaé recently, and have two employees working sales and promoting our services”, says Pedersen, who is the vice-president of company.

“We concentrate our services on rig upgrades and maintenance in general, but have only been offering our services on the Norwegian continental shelf, where we have contracts with Transocean, Seadrill, Songa, Stena and Westcon Yards”, he says.

The company was founded in 2002, and the ambition is to offer a complete solution to the customer.

“Brasil Offshore is an important venue for meeting customers, suppliers, and competitors offering the same services we do. Our force is that we can offer a variety of services, and the customer doesn’t need to hire or deal with several different maintenance companies”, Mr. Pedersen says.