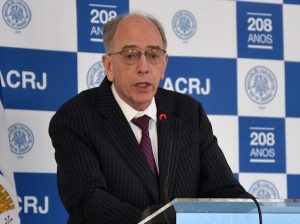 «Areas left out of bid rounds in the past resulted in a loss of millions of dollars», Mr. Parente said. Photo courtesy of ACRJ.

NBCC associates were among the 300 guests at the monthly ACRJ lunch with the business community of Rio de Janeiro. Keynote speaker was Petrobras CEO Pedro Parente.

The lunch was organized by the commercial association of Rio, ACRJ, on October 31, 2017, and host was ACRJ president Angela Costa. The European chambers of commerce of Norway, Belgium, Germany, Great Britain, The Netherlands, Italy, Portugal and France were all supporting this months´s traditional ACRJ business lunch.

The event took place at a moment marked by optimism, as the outcome of the ANP bidding rounds on October 27, was positive for the industry. Petrobras has been relieved of several burdensome obligations, and «the new Petrobras» was what the keynote speaker focused on in his presentation. 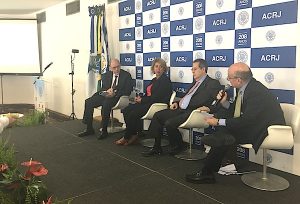 «Only one bidding round was held from 2008-2013 and with the high oil price at the time, Brazil lost a historic opportunity.  I estimate that BRL 1 trillion was lost in investments, in taxes and bonuses. The investments of Petrobras were reduced drastically», Mr. Parente said. The current Petrobras executive was a minister in the government of Fernando Henrique Cardoso and spent many years working in Banco do Brasil and the Brazilian Central Bank before taking over a bleeding Petrobras in May 2016. He has frequently been described as «a fixer», something he also did with success in global agribusiness and food company Bunge, from 2010-2014.

«In 2016, fundamental measures were passed and we started the process of recovering the time lost. One example is the decision to relieve Petrobras of the obligation to be operator on pre-salt blocks. It was a bad law for Brazil. Petrobras only had the capacity to develop 3 pre-salt blocks, but now we will have 6 blocks under development, with other companies in charge. Investments will increase and jobs will be created. Today, Petrobras has the right to choose.»

Mr. Parente spoke highly of the Brazilian Minister of Mines and Energy, Fernando Bezerra Coelho Filho, and called him a key person on the transformation. In a comment, he also expressed satisfaction with the outcome of the most recent bidding rounds. 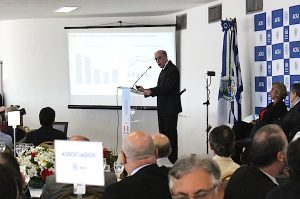 Interesting insights from the Petrobas CEO.

«We are living a new moment for the oil and gas sector, and Petrobras is currently repositioning itself, and restructuring our exploratory portfolio, in a more selective manner. We are teaming up with Exxon, with BP, and we are strengthening our position on pre-salt, acquiring new areas with a high potential. The pre-salt oil is highly competitive, also in a global perspective. Break-even per barrel is between 30-40 USD.»

The Petrobras CEO also talked about the ongoing divestment process, contributing to a diversification of the industry.

«Petrobras is on the right track, and important advances have been made. We are focusing our capacity and our strength as we go forward, and teaming up with big international players», Mr. Parente concluded.

Photo courtesy of RH and ACRJ