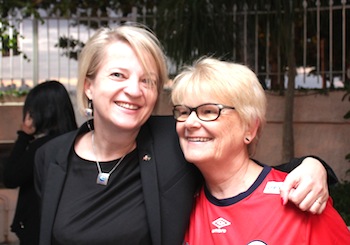 Helle Moen and NBCC president Erik Hannisdal.Helle Moen leaves Rio de Janeiro and Innovation Norway after four years in Brazil. Now she is planning to start a new company back in Norway.

As Helle Moen leaves the position as director of Innovation Norway in Brazil, her replacement, Mr. Stein Gunnar Bondevik arrives in Rio in the end of July 2016.

Bondevik has been head of the Innovation Norway office in Tromsø since 2012, but last year he spent six weeks in Rio de Janeiro to learn more about Brazil and about IN´s activities here.

«First of all I would like to congratulate him. These are challenging times, but there are huge opportunities in the Brazilian market, and Mr. Bondevik will be surrounded by a great team of professionals. My advice is to use Team Norway actively, and also work with other partners. This is the key to success. Team Norway and all the experience and helpfulness he will meet here, is vital to doing a good job».

Helle Moen is going back to Trondheim, where she is planning to start a new company. It is too early to share too many details, but Brazil will remain a country in focus and an important market for her new company.

«I will work closely with two partners, a Brazilian and another Norwegian with close ties to Brazil. The base will be Trondheim to start with, but we consider being present in Brazil or in another Latin-American country in due time. That is all I am able to say at the moment».

«I met Helle for the first time when I had her job. It´s a hard job with a lot of stakeholders and you need to please them all. Your contribution has been very important to the NBCC and you leave a great legacy. Good luck on your new ventures», he said.

«Working together makes us better and you will leave your footprint on Team Norway», she said.

The spirit of teamwork is something that Helle Moen will put to use back in Norway.

«Working in a team and appreciating the professional people around you, use them, try to learn from them and be humble when faced with things you don´t know that much about, is very important. Today I have so much more respect for people who know things that I don´t. We need each other.»

Helle Moen describes her time at the Innovation Norway office in Rio de Janeiro as «fantastic, but challenging years».

«I have learned a lot and it is just as interesting today as when I arrived. The complexity of the Brazilian society, industry, of the financial and business sectors has been challenging. As I had worked some in Brazil before and even started up a company here, I thought I was prepared, but Brazil is a very complex both culturally, geographically and on the organizational level. To figure out who actually makes the important decisions is demanding. Being patient is however what I found most difficult. I am not a particularly patient person myself, and in Brazil i had to learn that things take time. You have to accept that you are not able to accomplish all that you want, you have to take the long term approach, and this can be hard.»

She leaves Brazil as an optimist, on behalf of Norwegian business in Brazil, but in her own words more humble than when she arrived in 2012.

Some of the members of Camerata Laranjeiras performed during Kjell and Helle´s farewell churrasco.«The world has changed since I arrived four years ago, but the number of requests from Norwegian companies looking at opportunities in Brazil has not gone significantly down, despite all the negative media coverage. What we do see are investments in new sectors like aquaculture and renewables. Brazil is going through an extraordinary political upheaval and it has been very interesting to accompany this up close. I feel that a part of Brazil´s history is being written. I also believe that the opportunities in the market will become even more interesting. The image that investors have of Brazil today is much more realistic than when I arrived four years ago and when sky seemed to be the limit. Those who come to Brazil now, know more about what to expect. I also believe that the corruption investigations will lead to Brazil becoming a better and more transparent market in the future. So despite the current demanding situation, i am still optimistic», she concludes.