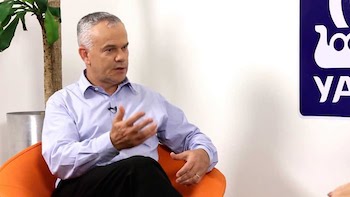 As part of the management changes, Lair Hanzen, formerly head of Yara’s Downstream unit in Brazil, will take up the newly established position as Senior VP for Yara Brazil. Hanzen (in the photo to the left) has worked in the fertilizer sector for over 20 years, and joined Yara in 1996, in Argentina. He has also worked for Adubos Trevo, that was later acquired by Yara.

Now, he will be responsible for the entire Yara portfolio in Brazil, including the Galvani joint venture and all strategic projects in the country.

«I am very satisfied with the new position. It recognizes the size and importance of Brazil within Yara. Brazil represents 1/3 of Yara employees, 1/3 of the volumes sold, and there are probably still very good opportunities going forward. Bringing Brazil as part of the top Corporate Management of the company, puts Brazil in the spotlight, and increases the opportunities, but of course also the challenges. To manage all that is a very interesting scope to me, even more since I continue to be located in Brazil», Mr. Hanzen says.

He will actually occupy both his old job and the new post simultaneously and will be the only Non-European executive for the moment – and the first Brazilian to become global vice president of the company.

«This is a privilege and makes me proud. Yara is a global company, and we should have representations in the Corporate Management. We are no longer a European company», Mr. Hanzen says.

He will report to CEO of the company, Svein Tore Holsether, but remains headquartered in Brazil.

«After spending recent months visiting numerous Yara sites, meeting employees and conducting business and organizational reviews, I have concluded on the key organizational changes needed to strengthen operational focus and improve alignment behind our strategic direction», Svein Tore Holsether, President and Chief Executive Officer of Yara, said in a press release on February 8, 2016.

«It is clear to me that Yara’s employees are dedicated and work hard every day to deliver value to our customers, shareholders and society. I am confident that the changes announced today will sharpen our strategic focus on profitable growth and reinforcing our integrated business model», said Holsether.

According to Lair Hanzen, the organizational and management changes will strengthen Yara Brasil.

«In the daily routines of the plants and operations, little or nothing will change, but we will focus on optimizing at a higher level, and increase the growth speed. We will no longer have a segment view within Brazil. Yara Brazil, given its size, will be managed and optimized as one single entity, and decisions will be taken closer to where the action happens. We´ll hopefully have faster and more committed decisions, so that should empower the local organization, to move faster and more sustainably with accountability», Mr. Hanzen explains.

He is positive in his outlook on 2016, as agriculture seems to be an island less affected by the political and economic crisis that Brazil is facing.

Brazilian agriculture is more and more competitive, export-oriented, so naturally hedged, and as long as the world needs food, Brazil has a unique position to supply the world, due to factors like land, water, climate, professional farming and competitiveness. And there is no agriculture without fertilizer. Brazil is positioning itself to be the bread basket of the world, and Yara is already the leader in plant nutrition. This is what I call a perfect marriage», Mr. Hanzen concludes.

Yara International ASA is a Norwegian chemical company and its largest business area is the production of nitrogen fertilizer. The company also produces dry ice, nitrates, ammonia, urea and other nitrogen-based chemicals.

The company was established as Norsk Hydro – the world’s first producer of mineral nitrogen fertilizers – in 1905 and demerged as Yara International ASA on March 25, 2004. Yara is listed on the Oslo Stock Exchange and has its headquarters in Oslo. The company has more than 12,000 employees, production sites on six continents, operations in more than 50 countries and sales to about 150 countries.