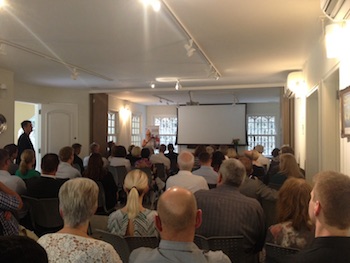 On the occasion of the visit to Brazil by 45 members of Profilgruppa, Innovation Norway arranged its first seminar on seafood and aquaculture on November 3, 2015 .

Profilgruppa consists of a cluster of companies and enterprises within business and society in the region of Midt-Troms, in the northern part of Norway. The cluster was established in 1992, and is currently composed of 54 companies within the industrial and primary industry, including seafood, construction, energy and technology, as well as trade, banking and insurance, transport, tourism and expertise, and development actors such as universities and study centers. On the public side, there are members from municipalities, military and the regional council, amongst others.

Brazil is a promising market for aquaculture and fishing. The seafood & aquaculture sector has recently been included in the strategy of Innovation Norway’s office in Brazil, and the level of activities in this sector is going to increase in the near future. Traditionally Brazil has been one of the largest producers of poultry, beef and pork. Local fishing activities have not been a priority, so the increase in offer will need to come from imports or aquaculture activities.

Tilapia aquaculture is the most consolidated fish farming type in Brazil. Following the same trend of the general aquaculture industry, it has increased along the last 10 years, reaching a 250,000-ton production in 2013.

In 2015, Innovation Norway and the Norwegian Seafood Council also joined efforts in a press trip with two journalists from Brazil. The group traveled to Trondheim on the occasion of AquaNor.

The program combined the seafood & aquaculture and travel & tourism sectors, and part of the outcome is displayed in the photos.