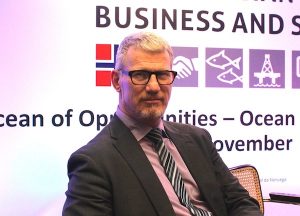 «After so many years as a diplomat, I’ve become accustomed to living abroad. I focus more on what I gain from living somewhere new than on what I miss», Ambassador Gunneng says.

Nils Martin Gunneng took office in September and have had some very busy first months.

The new Norwegian ambassador to Brazil, Mr. Nils Martin Gunneng holds a Master’s degree in Political Science from the University of Oslo, and has been a career diplomat since 1994. Mr. Gunneng has served in Norwegian Embassies in Rabat, London and Beijing, and held various positions in the Ministry of Foreign Affairs in Oslo. From 2014 to 2017, Mr. Gunneng served as Deputy Director General at the Services Department of the ministry.

He is however no stranger to Brazil as his wife, Andrea is a «mineira» from Belo Horizonte. The friendliness of the Brazilian people is something the new ambassador appreciates deeply, and in this interview with Nordic Light he shares his thoughts on Norwegian-Brazilian relations, and also reveals what he likes to do when he is not working.

NL: How have the first months been?

NMG: Busy! It’s a continent-sized country, and Norway is engaged in many regions of the country with everything from business to forest preservation. I’ve tried to visit the most important players in the Norwegian-Brazilian bilateral relationship and have traveled extensively these first months. But there are still important places and people that I haven’t met yet, so the introduction rounds will continue for some time yet. We’ve also concluded the first Norwegian Brazilian Business and Science Week together with the Consulate General in Rio de Janeiro, Innovation Norway and all the other participants in Team Norway in Brazil. I think we can already conclude that the Week was a success, it showcased the strength and variety of the Norwegian presence in Brazil, and the interest from Brazilian counterparts bodes well for the future.

NL: What are your main priorities as Norway´s ambassador to Brazil?

NMG: The Norwegian Government’s Brazil strategy highlights four aspects of the bilateral  relationship: Trade and investments, Climate change cooperation mainly by combating deforestation through the Amazon Fund,  Science cooperation,  and International cooperation within the UN system and other global organizations. These priorities guide me – when I can choose how to use my time.

NL: What are the main challenges?

NMG: Well, it depends what we are talking about. The main challenge for bilateral trade and Norwegian investments in Brazil are related to regulatory issues. Brazil is not the easiest country in the world to do business with. Some of the restrictions are there for political reasons, but a lot has to do with red tape and a lack of predictability in the framework within which companies operate.

Another issue is the general skepticism that seems to exist in Brazil towards foreign investments. In order to approach this skepticism, I think we need to share our experiences about how Norwegian business became globally competitive through opening up – gradually – for foreign investments and international competition. There are many other advantages that comes from Norwegian ownership that Brazilians should be aware of as well, like good corporate governance and transparency; gender equality and non-discriminatory practices in the workspace; top notch health, environment and safety standards. I could go on and on.

NL: Oil, gas and maritime industries are important for the relations between Norway and Brazil. Brazil is recovering from an economic crisis, so is the international oil and gas industry. Where do Norwegian Brazilian relations in these sectors go from here?

NMG: Statoil is the main actor in this sector from the Norwegian side, and as you know the company is investing heavily in new areas of exploration offshore in Brazil. As activities starts to materialize in the Santos basin, this will eventually benefit the supply industry as well, who is struggling at present. So the future for Norwegian-Brazilian cooperation in this field looks bright if we look some years into the future. Moreover, even though carbon-based energy production will be important and necessary for many more years, the shift away from carbon to renewables is picking up speed. And Norwegian energy companies including Statoil, Scatec Solar, Statkraft and others are investing in renewable energy in Brazil. This is a space to watch during the coming years.

NL: Rainforest protection and climate is another important area of cooperation. Norway has donated millions to Brazil´s Amazon Fund. Will Norwegian support change in character in the future?

What happens next? Our present agreement with Brazil through the Amazon Fund lasts until 2020. The Brazilian Government has made ambitious commitments on deforestation towards 2030 under the Paris agreement, and Norway is looking forward to the forthcoming talks on how we can continue to work together against climate change beyond 2020.

NL: You have years of experience from the Norwegian Ministry of Foreign Affairs, but what is your previous «Brazil experience»?

It’s all due to my wife, Andrea, who is Mineira from Belo Horizonte. We’ve been married for 14 years now, so I have visited Brazil and my extended Brazilian family many times. I haven’t followed Brazilian politics closely for all these years, but I suppose being exposed to Brazilian culture for quite some time makes me feel a bit more at home and at ease than someone who arrives fresh to the country.

NL: You have been stationed abroad before, in Morocco, London and Beijing. Is there anything in particular that you miss, anything typically Norwegian?

NMG: After so many years as a diplomat, I’ve become accustomed to living abroad. I focus more on what I gain from living somewhere new than on what I miss. So, at the end of the day I don’t miss much except Norwegian mountains. There is something about hiking for hours in Norwegian mountains that comes very close to meditation. The complete quietness instils a feeling of being a very small but integral part of something very big. But I get my yearly fix at our mountain cottage, so no big deal.

NL: Anything in Brazil that has taken you by surprise?

NMG: This time around, no. But the first couple of times I visited, I was struck by the friendliness of the Brazilians. They seem to be eager to share things that for us would be very intimate after just a few hours together. If Brazilians are reading this you probably know some Norwegians already. You know we’re not exactly open-hearted, right? It takes time to get to really know a Norwegian.

But the surprise was that Brazilians can be fairly formal at times. You have to abide by certain niceties. Certain formalities should be observed. I think it would be quite easy for a Norwegian to unintentionally offend a Brazilian because we mistake this friendliness as a permission to cut the niceties (which is what we often do with friends and colleagues that we know well at home). It took me some time to get my head around this. It think I’ve got it more or less worked out now. Until the next time I get it wrong of course…. So, on behalf of all Norwegians, if we have somehow offended you, dear Brazilian friends, rest assured that with 99,9% certainty it was not intended, it’s just us being…. Norwegian, i.e. blunt.

NL: What do you do when you are not at work?

NMG: Hm. Lately I have to admit there has been a lot of work. The thing is, I enjoy working. But I do have other interests as well. Playing the piano is my favorite pastime. I’m not a very good pianist, but I enjoy playing jazz. Otherwise Andrea and I enjoy hiking, traveling etc.