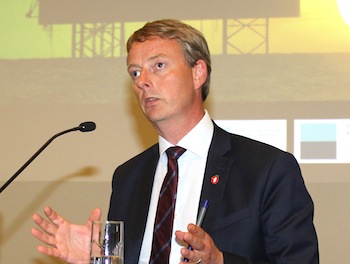 Norway´s minister of Oil and Energy, Terje Søviknes, participated in the opening session of the well-received Brazil Podium during Nor-Shipping 2017.

Brazil was in many ways a hot topic during Nor-Shipping and more than 300 people participated at the Brazil seminar on May 31, 2017. Brazil is the the largest and most promising offshore market in the world and Norway is home to the most advanced offshore fleet. A perfect match and a driving force to further strengthen bilateral relations, according to Abran president José Roberto. The seminar was organized by Abran and Norwegian Shipowners´Association (NSA), the Brazil@Norshipping organization, with the support of BNCC, NBCC, Innovation Norway and The Norwegian Consulate General in Rio de Janeiro.

Value added
Two ministers were also present at the seminar, proving the importance given by the Norwegian government to the bilateral relations with Brazil.

«Norway and Brazil are both major energy nations with huge offshore reserves, and we both have a lot to gain by cooperating. I am confident that we both have the know-how and the technology to face the challenges and I believe in a rewarding cooperation also in the future», the Minister said. He emphasized the need for adapting to new market realities and to work towards a more sustainable energy mix.

«Technological development has always played a key role in unblocking new resources and making it possible to produce faster and smarter. Norway and Brazil face many of the same challenges, we have a demanding offshore environment and both see technology as a key approach. Although many companies are struggling, we need to focus on the opportunities and this industry has demonstrated the ability to adapt before. Transition requires action», Minister Søviknes said in his address.

The 26th edition of Nor-Shipping took place in Oslo from May 30-June 2, 2017. 35.000 visitors from 80 countries were expected to the Nor-Shipping exhibition and seminars this week, and numerous events were dedicated to Brazil. a 60 people strong Brazilian delegation were present at Nor-Shipping and many NBCC members were present both as visitors and exhibitors.

«You add value to Nor-Shipping, and the Brazil@Norshipping agenda demonstrates how important your country is a shipping nation. We are long term partners, and Norway has high hopes for the offshore ocean economy. 70 percent of our exports earnings come from ocean related activities and Brazil is the world´s most important offshore market», Deputy Minister Dilek Ayhan in the Ministry of Trade and Fisheries, said in her speech.

The half day seminar was divided in several different sessions, and the opening session gave a general outlook on the fast chaining scenario in Brazil and globally.

Read more from BrazilPodium: A new boost for partnerships

«Our two countries are blessed with natural resources and we have developed a cooperation that has served both countries well. In 2014, the oil price collapsed, but we are convinced that we will rebound and recover. We are looking forward to extend and enhancing the cooperation, and to exploring new opportunities together», Sturla Henriksen, CEO of Norwegian Shipowners´Association said.

Catalyst for change
Several Brazilian speakers focused on how Brazil is in the process of becoming a «friendlier» destination for investors. Brazil is learning from its mistakes, and investors should think beyond the clichés.

«Brazilians are easy to do business with. Our people is an asset, and Brazil is a huge market, a huge economy with a huge maritime potential. Brazil is there, full of opportunities, but it is up to you to grab them», Brazil´s Ambassador to Norway, George Monteiro Prata said. He also showed how the Brazilian economy seems to be picking up, and said there is a consensus in Brazil that the economy needs to be more open and more international.

The president of the Brazilian Institute for Petroleum (IBP), Jorge Camargo, talked about the outlook for the oil and gas industry in Brazil.

«Brazil is friendlier to investments, and offshore Brazil stands out as the most economically robust oil province today. If you are in offshore, you have to be in Brazil», Mr Camargo said. He described the productivity on pre-salt as amazing and unheard of, and presented estimates from Rystad Energy that show that Brazil could double its production in the next 20 years. But it depends on Brazil removing the obstacles that has been created over the years.

«We are doing progress. The Petrobras obligation to be operator on pre-salt has been removed and a bid round calendar is now in place. We are working on  a new local content model, but still have work to do on environmental licenses, taxes and regulations. A dreadful crisis has been a catalyst for change, and now is the time to position yourself for the future», Mr. Camargo said.

Director of Innovation Norway in Brazil, Stein Gunnar Bondevik was also part of the Brazilian delegation. In his view, creating confidence is important and the BrazilPodium could play an important part in doing so.

«Despite the challenges, we need to keep the activity level high and Norwegian stakeholders well informed. Due to the size of the projects within oil and gas, knowledge is fundamental and minimizing risk is what everyone is looking for. When it comes to Brazil, there is no doubt about the attractiveness of the natural resources, but a lot of uncertainties about framework, the political situation and how the Petrobras administration will handle future challenges. The best way to face the challenges is to meet, get to know each other and have an open and clear dialogue», Mr. Bondevik commented during the seminar.

New priorities
In a separate session, the new role of BNDES, the influential Brazilian development bank, was discussed. BNDES is the main provider of long term financing in Brazil, and with the launch of a new set of guidelines in June 2016, the development bank has changed its strategy, according to Mauricio Neves, of BNDES.

«Cooperation is now the name of the game and BNDES intends to play a less important part in projects. Today we carefully consider wether a project will bring good return to the country, and project qualifiers are innovation, sustainability, health, education, infrastructure, exports and SMEs», Mr. Neves said. He also signaled that the bank is willing to customize solutions for the industry. Many are struggling, and there is currently 20 percent idleness in the Brazilian offshore fleet. But according to Mr. Neves there are still resources available. The challenge is how to use it.

«The financial system needs to be flexible to fit the low price scenario», Mr. Neves said.

BNDES has worked closely with GIEK on several projects, and GIEK CEO Wenche Nistad as well as Country Manager Claudio Goulart of the Norwegian shipping bank DNB were also part of the panel, together with Christine Rødsæther, who is a Partner at Simonsen Vogtwiig. Strengthening the partnership is a priority to both BNDES and the Norwegian finance institutions.

«Patience is a key word, and you have to respect that the legal system is different and understand that things work differently. You have to do it the Brazilian way, and it is not difficult to do business in Brazil», she said.