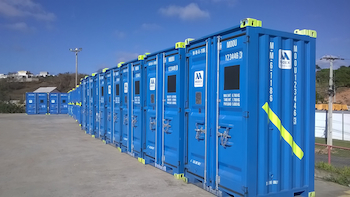 Norwegian offshore container manufacturer Modex has partnered with international certifier Control Union Testing & Inspections for the use of the entity’s facilities in Macaé, Rio de Janeiro. Such partnership already exists in certain countries, and the agreement covers inspection, repair and fleet management of Modex fleet in Brazil.

The first batch of Half Heights, Mini Containers and Pressurized Cabins is already in country and rented to different customers. The company expects to increase its fleet to the extent that the units are sold or rented.

According to the Country Manager of Modex in Brazil, Carlo Vollmer Cervo, the company, that established in Brazil for about 2 years, is fully positioned to grow in the local market.

«We have a lean structure, which allows us to work with lower costs than companies that have larger fleets in country», he says. The company also runs its own manufacturing plants, located in Shanghai, which provides full control of its supply chain and manufacturing costs.

The offshore cargo carrying units market in Brazil is estimated at around 15,000 units. Much of this fleet is being replaced in the last years to meet the DNV standards.

With over 14,000 units in Norway, Modex Energy is the largest player in Norway, where it operates under the Euro Offshore brand.