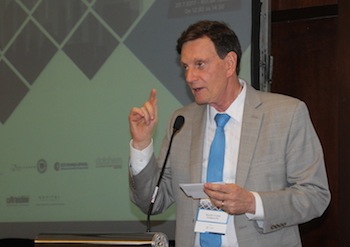 «It is time to get the priorities straight and we are counting on your support» Rio Mayor Marcelo Crivella said during lunch organized by European Chambers of Commerce in Rio de Janeiro.

The European Chambers of Rio de  Janeiro, promoted on July 20 at the Sofitel Rio de Janeiro Ipanema, a meeting with Mayor Marcelo Crivella to discuss the investments and the outlook for the city of Rio de Janeiro. About 120 associates of the chambers of commerce from  Belgium, France, Germany, Great Britain, Holland, Italy, Norway and Portugal were present.

«You are all very welcome here, and Rio de Janeiro is very interested in cooperating with you. We are counting on you to bring investments and innovations to Rio», Marcelo Crivella said in his address to the CEOs, diplomats and executives present.

He expressed sadness with the current situation in Rio, where violence is soaring, and the economic crisis is paralyzing public services.

«Our history is evidence that Rio de Janeiro was meant to be an integrated city, but with time, Rio de Janeiro has turned into a segregated and violent city. This is a shame and has perpetuated due to the lack of political priority. Priority was never given to education or health care, and a segregated, violent city is the result.»

On the current allegations of corruption in the country, the Mayor said that he believes that the worst result of that moment was to see the inversion of priorities, in reference to the interests of politicians being placed, in many cases, above those of the population.

Several of Mr. Crivella´s close colleagues in City Hall were also among the speakers. Both the Mayor and his advisors outlined several of the actions his government is implementing.

Mr. Jorge Farah, Under-Secretary of Finance in the Crivella administration, tried to explain the fiscal challenge the government is facing.

«A revision showed a R$ 3,8 billion gap between revenues and expenses. 60.000 formal jobs were lost from January to May 2017, and the impact on revenues was huge.  We are seeing a timid recovery in several areas, and hope to see improvements in 2018, after implementing several actions, like staff cuts and renegotiation of service contracts.», Mr. Farah said.

Clarissa Garotinho, Secretary of Development, Employment and Innovation in the Crivella administration presented an initiative named «Porto 21», an area where the local government would like to see a creative district thrive, where private companies, civil society, government and academia come together and develop activities focused on innovation, information and social technologies.

«We are looking for international partners to establish here, and we are currently studying incentives that we would like to offer to attract investors and stakeholders within technology and innovation», the Secretary said.

«The average salary in Rio is R $ 3,347.00. More than 80 percent of formal jobs are in the private sector, the rest in the public sector, and 61.48 percent of jobs are in the formal economy, versus 38.52 percent in the so-called informal sector.»

Regarding the inequalities of the city, Osório mentioned the neighborhood of Pavuna, where only 5.8 percent of the residents have higher education, while in the Lagoa neighborhood, this number reaches a European level of 58 percent.

Mayor Crivella and the speakers with representatives from the European Chambers.

«Our ambition is to reduce inequality between people and this also involves reducing the displacements between housing and the workplace. Reducing inequality is a priority for this government, and we intend to do this through territorial actions and action plans adjusted to the different neighborhoods of the city», explained Osório.

Lucio Macedo, representing Riotur, gave a presentation on the importance of tourism for Rio, and outlined the many different events and congresses Rio will host the next years.

«The economic impact is huge. The events contribute to creating jobs and we believe in a 25 percent increase in the number of tourists to Rio de Janeiro. 900.000 will come only in 2017. The city is ready – come to Rio», Mr Macedo said.

The meeting, sponsored by Zaroni Advogados, took place in an environment of constructive dialogue to foster exchanges of ideas, projects and investment attraction plans for the development of the city of Rio de Janeiro in the coming years.