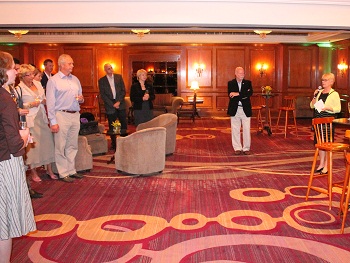 A reception was held for the Norwegian ICOM delegation on August 14, 2013.

“Brazil has a very rich culture, and it is only natural that a conference like this takes place here. Brazil is probably most known for its music and for football, but this country has a great variety of cultural expressions that both embrace and enrich each other”, Mrs. Sissel Hodne Steen, the charges d’affaires at the Norwegian Embassy in Brasilia, said in her welcoming speech Wednesday night.

Leif Pareli is the president of the Norwegian National Committee of ICOM.

“We appreciate the chance to meet Norwegians who live here in Rio de Janeiro. Meeting new people is probably of greater importance than participating at lectures and meetings during the conference. Many of us are in Rio de Janeiro, Brazil or even South America for the first time, and we are looking forward to expand our knowledge of the country. We are here to find inspiration and make new experiences. It is an overwhelming city, with overwhelming traffic, a colorful human life and spectacular nature. We have a lot to learn, but even though Norway is a small country, we might have something to teach as well”, Mr. Pareli says. He works as a curator at The Norwegian Museum of Cultural History, Norsk Folkemuseum, in Oslo, with a special focus on the Norwegian Sami minority and an overall responsibility for the Sami collection at the museum. Coming to Brazil, a country with hundreds of different indigenous people, is therefore something he defines as especially interesting.

He is aware of the ongoing conflict between authorities and Brazilian indigenous people on the destiny of a former museum close to Maracanã.

Leif Pareli and Sissel Hodne Steen.“It is certainly interesting, and at Norsk Folkemuseum, we recently reached an agreement with the Sami Parliament, that half of the Sami collection will be returned to Sami museums. This is a project other countries could use as inspiration”, Mr. Pareli says.

The theme of ICOM Rio 2013 is Museums (Memory + Creativity) = Social Change. Several keynote speeches, workshops, collaborative sessions and visits will address this theme and allow participants to examine this equation, which gathers concepts that are essential to defining what a museum is today.