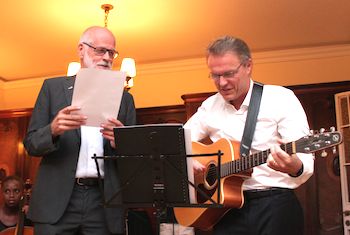 The Norwegian community in Rio de Janeiro bids farewell to Ørnulf Steen, who returns to Norway after two and half years in Brazil.

Mr. Steen is a very dear person to the Norwegian community, something the attendance at the event illustrated clearly. The business community was also represented, by NBCC president Halvard Idland, Statoil´s country manager Pål Eitrheim, Helge Austbø of DOF Brasil, Kjetil Solbrække of Sintef do Brasil, Odd Isaksen of Brazilship Scanbrasil and Helle Moen of Innovation Norway, among many others.

Camerata Laranjeiras entertained with Brazilian bossa nova and traditional Norwegian music, and Mr. Steen was also challenged to sing along to a version of «Let it be» – that had been custom made and rewritten for the occasion.

«On behalf of the Norwegian community in Rio de Janeiro, I would like to thank you for your support and cooperation. You deserve a special thanks for the efforts of turning the «Princess Ragnhild´s Church» into reality. The church has become a place where Norwegians in Rio come together. You are a kind and positive person, and we wish you all the best in your new position as head of the whole Norwegian Church Abroad organization back in Norway», Consul General Helle Klem said in her address to Mr. Steen and the guests.

From the left: Church board member Linda Edvardsen, former president Cintia Overvåg and chairwoman of the Norsk i Rio network Linda Anita Haugen.Linda Anita Haugen from the Norwegian in Rio (Norsk i Rio) network has worked closely with Mr. Steen since his arrival two and a half years ago.

«Ørnulf is a very sociable and including person who has been supporting our initiatives and constantly inviting us to use the church for our events. We in the Norsk i Rio network have cooperated closely with the Consulate and the church, and it is going to be hard to find someone to fill his shoes», Linda Anita Haugen said.

Cintia Overvaag has been the president of the Norwegian Church in Rio de Janeiro while Mr. Steen has been the church chaplain. Now, Cintia is stepping down, as she is also leaving for Norway. The new president is Oddbjørn Jortveit, and the host family at the church, Asbjørn and Hita Eikeland are also key people in the daily running and activities at the church.

«His presence here in Rio has been very important, and it made it possible to turn the dream of having our own church into reality. He continued the hard work of Stein Karstensen and Anne Netland, and was able to formally open the church in Gavea. It was a lot of hard work, a long process and without Ørnulf we would not have made it. He is also a very charismatic person, and it is a pity that he is leaving», Cintia says.

To Mr. Steen himself, the opening of the church in Gavea was the absolute highlight during the years in Rio de Janeiro. But meeting people, in daily life and in more difficult situations in life, has also made a great impression.

A musical farewell with Rio de Janeiro.«In these situations you learn a lot about other people, but also about yourself. Brazil has also taught me to become more patient, and the excitement and joy Brazilians show all the time, has made an impression on me», Mr. Steen said.

He is leaving for Norway and Bergen this week, and starts his new job on March 2, 2015.

Busy agenda at the church
The Norwegian Church in Rio de Janeiro, also known as the Seamen´s Church or Sjømannskirken, has a busy agenda for the first semester of 2015 and has already started the planning of the 2016 Olympics.

The church is in the process of finding Mr. Steen´s sucessor, and in the meantime, the Norwegian community will have the pleasure of welcoming Anne Netland back to Rio for several church services and events in the months to come.

To take a closer look at the agenda, access the church homepage here.