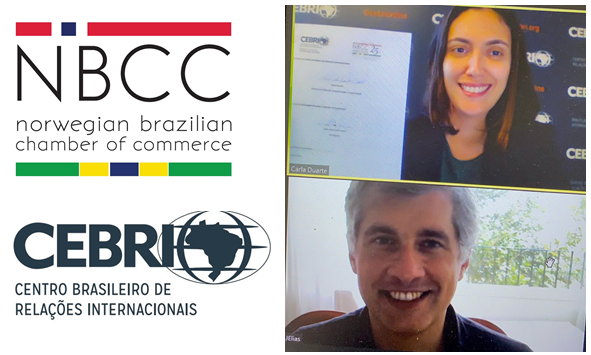 NBCC and Brazilian Center for International Relations (CEBRI) have signed a memorandum of understanding.

The agreement seeks to promote closer cooperation between the leading Brazilian think tank and the Norwegian Brazilian Chamber of Commerce.

The parties will promote events, share information, promote debates and support each other in the efforts to promote international and Norwegian-Brazilian relations.

The MOU was signed in April, by NBCC president José Carlos Elias and Carla Duarte, Director of Institutional relations and communication of CEBRI.

“We are thrilled with this cooperation with CEBRI, who conducts a modern, pragmatic, and forward-looking agenda of international relations through engagement of strategic stakeholders. That is a fantastic match to NBCC’s own objectives of promoting the commercial exchanges and investments between Norway and Brazil and the overall progress of our society”, says José Carlos Elias.

Throughout its 21-year history, CEBRI has held nearly 500 events, produced more than 200 publications and worked with an international network of more than 100 high-level entities on all five continents. CEBRI already cooperates closely with the Norwegian Consulate General in Rio de Janeiro and the think tank also has NBCC members like Equinor, Grupo Lorentzen, Mattos Filho and Veirano among its supporters.

This is the third MOU that NBCC signs with strategic partners. NBCC and IBP signed a similar agreement in 2017, which was renewed in 2019. In 2019, a cooperation agreement was also signed with EPE – The Brazilian Energy Research Office. The agreement was the first ever that EPE signed with a chamber of commerce.