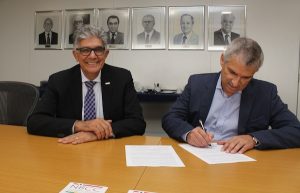 The agreement was signed by Rachid Felix and Jorge Camargo.

An institutional partnership agreement between NBCC and the Brazilian Institute of Petroleum (IBP) was signed during a meeting in the offices of IBP on December 6, 2017.

The agreement was signed by NBCC president Rachid Felix and IBP president Jorge Camargo, and the two entities are now looking to cooperate even closer in the future, and also organize business events together.

«We want to go even further than the scope of the institutional agreement and will start preparing for 2018 immediately», IBP president Camargo says.

NBCC and IBP have cooperated on several occasions in the past, and the agreement now formalizes the existing ties between the entities.

«The collaboration between IBP and NBCC goes way back, and we have worked together on several events, but also in the effort that the whole industry is behind, to promote necessary structural changes. We were successful, thanks to a coordinated and objective effort from many stakeholders. These experiences set the stage and the signing of today´s agreement formalizes our close relations and creates an even better environment for us to broaden our cooperation even further», Rachid Felix says. 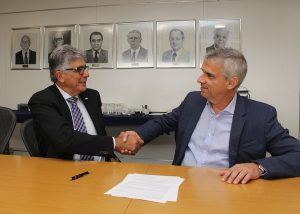 The intention now is to select areas of interest to both IBP and NBCC, areas where both Norwegian and Brazilian industrial players have common ground and interests, and work together to improve the business environment even further for these players.

«Promoting the oil, gas and biofuel industry in Brazil is on IBPs agenda, and one of the greatest examples that we frequently look to, is the Norwegian model. There are also many Norwegian companies present in the Brazilian oil and gas market, and this combination of our entities, this common effort, could result in concrete initiatives and common projects that would benefit the Brazilian oil and gas industry as well as the Norwegian companies. In my view it makes sense for us to cooperate more closely», Jorge Camargo said after signing the agreement.

«This is actually the formalizing of a practice that has existed for some time. We have already proven that working together brings results, both when it comes to regulations and business environment, as well as in the predictability and clarity in the dialogue between players. This is something we hope to see even more of, as the activity level in the Brazilian oil and gas industry now seems to be recovering. Brazil has a complex and demanding business environment, but we hope that working together will enable us to identify and handle bottlenecks that are currently hindering a more rapid development. NBCC represents various industries and service providers in the oil and gas supply chain», Mr. Felix says. 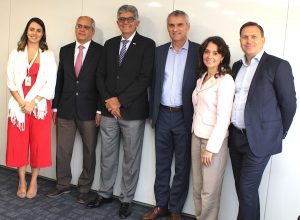 IBP marked its 60 years anniversary this year and has operators like Petrobras and Statoil, and suppliers like Aker Solutions and Subsea 7 among its associates. Gas and biofuels are also priority areas to the institute.

IBP has similar agreements with the chambers of commerce of the United States, Great Britain, the Netherlands, Germany and Italy.