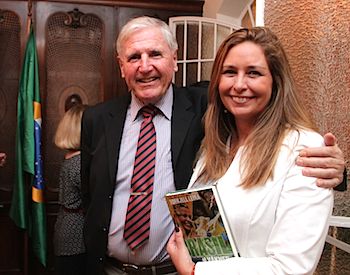 «It is a great pleasure, privilege and honor to be elected president of NBCC, and at the same time celebrate our 20 year anniversary», Camila Mendes Vianna Cardoso said during the event, that took place in the residence of Consul General Helle Klem in Urca, Rio de Janeiro.

Full house
The Norwegian Ambassador to Brazil, Mrs. Aud Marit Wiig, the Consul General in Rio de Janeiro, Mrs. Helle Klem and several former presidents of the NBCC were among the many distinguished guests at the commemoration.

«The NBCC has become an important institution for the Norwegian community in Rio de Janeiro, for the embassy and for Norwegian authorities. Through our meetings, you are able to communicate a more realistic impression of what it is like to do business in Brazil. The present situation both globally and locally poses challenges, with a number of issues you need to tackle as you embrace the next 20 years. I believe it is in times like this that the role of the chamber is  more important than ever. It is in times of struggle that the members need colleagues to share experiences and give advice», Ambassador Aud Marit Wiig said in her address during the event.

100 people attended the cocktail party in commemoration of the 20 year anniversary of the chamber. Mr. Arne Georg Arnesen, the first president of the chamber, was also present. He shared several anecdotes on the early years in the chamber.

Mr. Odd A. Isaksen, board member of NBCC and partner at Brazilship/Scanbrasil has been active in the chamber since the beginning. He came to Brazil in 1983 and thanked the late Princess Ragnhild, her husband Mr. Erling Lorentzen, and former Consul Tore Bull-Njaa for the initiative of creating the chamber 20 years ago, in his address.

«He was definitely the father of NBCC. It has been some interesting years, not always easy. In 2004-2005 we were down to four or five members, and it is therefore great to inform that we have now passed 100 company and individual memberships», Mr. Isaksen said. He also talked about the active role the chamber played in the early 2000, when Norwegian authorities considered closing the General Consul in Rio de Janeiro due to low activity.

«When looking at the NBCC we have today, it has been worth the hardship and effort showed by our members over the years», Mr. Isaksen said.

Mr. Torkjell Leira was the guest speaker of the event.

Awakening
Guest speaker at the event was the Norwegian writer Torkjell Leira. He has written several books and is probably the only Norwegian that has visited all 27 Brazilian states. He brought greetings from the sister chamber in Oslo, from BNCC president Harald Martinsen and former president Terje Staalstrøm.

«I first came to Brazil in february 1990, and spent a year in Brasilia as an exchange student. 25 years ago, in March 1990, Fernando Collor took office as the first directly elected president. So many things have improved since then, and the big picture is extremely positive. We are going through a massive crisis now, and I hope the pressure will result in further improvements in economy and politics. When it comes to Norwegian-Brazilian relations, the interest and contact between our countries is so much bigger, deeper and better than a decade ago. And there is no reason why the good relations should not continue, despite the current situation. Our relations are so much more than commercial, and I have lost track of the number of high level political visits to Brazil the last years. Looking at the long lines, I am extremely optimistic», Mr. Leira said.

In his book «Brasil-Kjempen våkner» («Brazil – the giant awakens» in English) from 2014, he describes how Brazil entered the 21st century as a somewhat insignificant giant, known for samba, football and carnival, and how this is changing. He identifies the Real Plan and the stabilization of the economy under president Fernando Henrique Cardoso and the election of president Lula in 2002 and the following reduction of poverty under Lula, as key happenings in this awakening.

From the left. Mr. Paulo Rolim, Mr. Helge Austbo and Mr. Godofredo Mendes Vianna.Consul General Helle Klem was also among the congratulants at the commemoration.

«I would like to thank the chamber for excellent work and great cooperation. It is amazing how many Norwegian companies that have developed their business and presence in Brazil and NBCC has undoubtedly been instrumental to this end. NBCC is part of the backbone of Team Norway in Rio de Janeiro, and what we do is promoting Norwegian business interests in Brazil and increase the economic cooperation between our countries. We achieve more by working together», Mrs. Klem said.

Best year
The NBCC Annual General Meeting was also held on March 16, 2015. Mr. Halvard Idland steps down, and leaves the chamber in the hands of Camila Mendes Vianna Cardoso, a lawyer with 10 years experience from the NBCC board. Erik Hannisdal accompanies her as Vice-President and Johnar Olsen is the new Treasurer of the chamber.

Full house for popular commemoration.Former president Halvard Idland went through the annual report for the members during the annual meeting. The chamber now has 103 members. 13 successful events were organized the last year and the number of joint events with Swedcham and others is increasing.

The NBCC also launched the chamber´s Anti Corruption Policy in 2014, and all members are required to sign a statement of awareness.

The Rio Oil & Gas networking dinner in 2014 was a success, with a 31 percent increase in attendance, and with regards to financial results, 2014 was the best year in the history of the chamber, thanks to the networking dinner.

In her first address as NBCC president, Camila Mendes Vianna Cardoso outlined the plans for the next year. There are several events on the agenda, one being the Brazil Day during Norshipping in Oslo in June. She also talked about Norwegian-Brazilian relations.

«Our partnership is long-term and we need to have a positive attitude despite the difficult moment we are in, where the corruption scandal and the falling oil price have hit our economy as a perfect storm.  Challenging times are also times of opportunity», Mrs. Mendes Vianna Cardoso said.