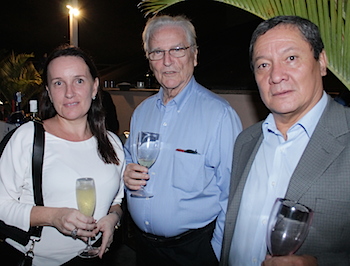 The happy hour for NBCC members took place at the rooftop of the JW Marriott Hotel, and what venue could be better for welcoming the most recent members of the chamber?

Snorre Blix represented Klaveness Brasil at the event. The Norwegian dry bulk carrier Torvald Klaveness has a fleet of more than 120 bulk carriers, and the main cargo carried are iron ore, coal, grain and bauxite. In Brazil, Hydro is an important client, and the company established an office in Rio de Janeiro in 2014. DNB is another important business partner.

«We have important clients in Brazil, and consider Brazil an important market, an important producer of raw materials. The company has been present with a local representative for about eight months now, and Klaveness has a developed a strategy for growth in the Brazilian market, where we would like to increase the volume handled and make further investments», Mr. Blix explains.  He is the General Manager of Klaveness Brasil.

Klaveness hopes to meet new people and strengthen its business relations through the membership in NBCC.

«In Norway it is easier to get access by simply knocking on the company door. Personal relations are more important in Brazil, and Klaveness would like to improve its relations with other companies even further, strengthen the network and meet more people in the Norwegian-Brazilian business community. It is also important to have a local representative to provide correct information of the market, the political landscape», Mr. Blix says.

From the left: Tomax Branch Manager Ana Carla Porto, petroleum geologist Roberto Porto and Business Development Manager Carlos Cabrera,Business Development Manager Carlos Cabrera, Branch Manager Ana Carla Porto and petroleum geologist Roberto Porto represented Tomax at the event. Tomax is a drilling company founded in 2005, by the two largest offshore operators in Norway at the time. Tomax has a development focus on technology for preventing drilling vibrations and stick-slip. The Tomax tool AST has been designed to overcome problems caused by vibrations, and is being used successfully around the world, and in Brazil for the last two years.

«We would like to strengthen our network and improve communication with the Norwegian business community. Statoil is among our clients, and we have drilled one well for Statoil in Brazil, with success», Mr. Cabrera says.

The offshore cabins and cargo carrying unit provider Modex is a company of Norwegian origins with the biggest part of its operations on the Norwegian Continental Shelf.

Present in Brazil since September 2013, the company has Norwegian management and is headquartered in Bryne, Norway. The Brazil office is located in downtown Rio, but has business partners in Macaé and is operating a small fleet of equipment in Brazil, with 40-50 different products offered to the market. Norwegian company Harding is among the clients, as is Schlumberger and others.

«Modex has confidence in the Brazilian market», Country Manager Carlo Vollmer Cervo says. Strengthening the ties with the Norwegian business community was the main reason why Modex decided to join NBCC.

«We would like to get to know the other companies, what they do, who they are and build friendships and do networking», Mr. Cervo says.

Ronaldo Lima, President of ABEAM, and his colleague, Executive Vice President Lilian Schaefer were present at the event on April 28.

«It´s a great pleasure for us at ABEAM to be a part of the chamber. ABEAM as an association is growing. We have 43 associates, and I expect us to be able to exchange business and information of mutual interests. We at ABEAM would like to increase the communication with Norwegian business community further. We already work closely with Abran, and joining forces is important, especially during times of crisis», Mr. Lima says.

«We see big opportunities here, and we know that a lot of Norwegian companies are active in the Brazilian oil and gas industry. We are looking to expand our business and would like to increase our business relations with Norwegian companies. We have already done business with Statoil and other European companies, and by joining the NBCC we want to meet the people in the industry and get to know who are working actively in Brazil, despite the current crisis. We believe this to be a phase and expect things to get better in 2016», Mr. Fay-Keller says.

The Norwegian Brazilian Chamber of commerce today has 103 members. 40 are Gold members, 58 are Corporate members and 5 are Personal members.