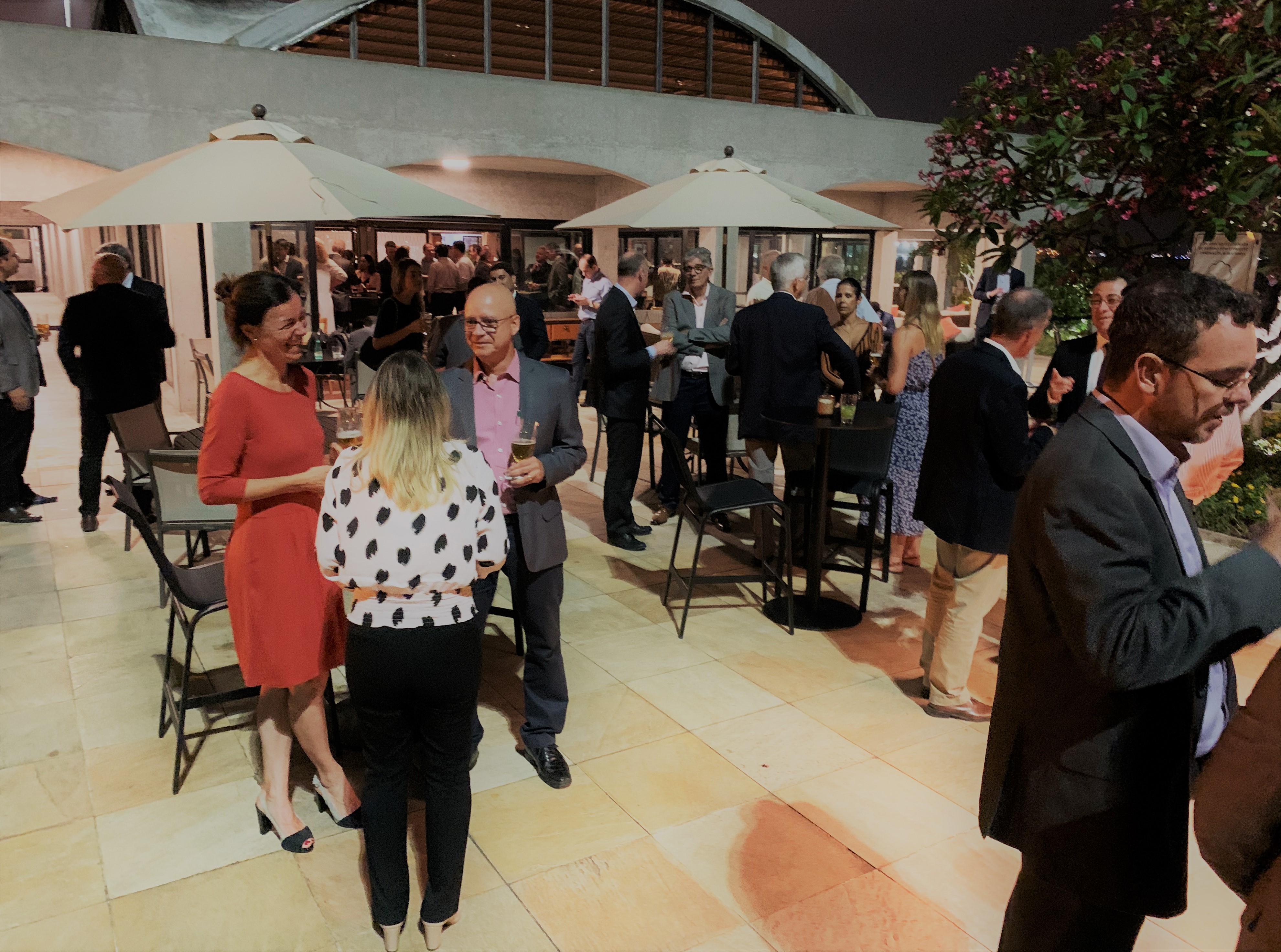 The traditional year-end networking lounge organized by NBCC took place on December 3, 2019, and counted with the presence of 75 distinguished guests.

This year, the Rio restaurant Assador´s was the venue for the NBCC X-Mas Lounge. Softdrinks, cold beer and caipirinhas were served, and Brazilian barbecue-inspired snacks and courses, like pastel, beef and chicken hearts were also on the event menu.

The venue is located in Flamengo with a scenic view to the Guanabara bay and the Sugar Loaf mountain. Not quite the typical Christmas card, but certainly a great place to celebrate that 2019 is coming to an end.

New faces
The chamber currently has 127 members, and many of them were represented at the event. Consul General Marianne Fosland, the new Director of Innovation Norway in Brazil, Haakon Ward and the new Science and Technology Councellor, Marianne Jensen, were also among the guests.

“I think it´s a very good idea to come together to celebrate the achievements of the year. It gives you a more informal update on people and businesses and creates a good sense of unity among partners. As for me personally, as I am still very new to Brazil, it is a good opportunity to connect to more of the NBCC partners. This will prepare me better for my tasks ahead”, Marianne Jensen says.

In 2020, she will look into possible new areas where Brazil and Norway have complementary interests and needs to develop cooperation. Norway and Brazil have a strong supporting framework for the cooperation with a state level MoU in Science and Technology from 2008, operationalized in the “Brazil-Norway in the 21st Century” or BN21 from 2013.

“We also have a very good relationship with the research and innovation funding agency FINEP, that has resulted in two joint calls with the Research Council of Norway supporting topics related to the offshore petroleum industry such as exploration, drilling, enhanced oil recovery and environmental technologies.”

The flagship arena for the research cooperation in energy is the November Conference.

“We just concluded a very successful 7th conference this year and will start working with our partners on the 8th to take place in November 2020. We hope to see many of the NBCC partners again there”, says Marianne Jensen.

Teamwork
NBCC president Alex Imperial also made a pronouncement during the lounge:

“This is our last event of 2019, the last of 14 events that we have organized or co-organized this year. It has been an intense and exciting year, and a special welcome to the 14 new members that joined the chamber in 2019”, he said and listed them all.

Alex Imperial also thanked former Executive Director Glorisabel Garrido Thompson-Flôres who had to leave the chamber after six years this November, as well as the staff, the coordinators and vice-coordinators of the working committees, the board and all the members.

“We wouldn’t have been able to achieve such a success without strong collaboration, commitment and teamwork. Thank you for the partnership and the support in 2019, and I’m looking forward to an equally exciting 2020! I wish you and your families a joyful holiday season”, said Alex Imperial.

On December 1, NBCC organized a different year-end event for members and their families and more than 160 members had signed up to participate in the NBCC Family Run/Walk (Circuito das Estações)

Read more about this event here.

See more photos  from the X-Mas Lounge below!