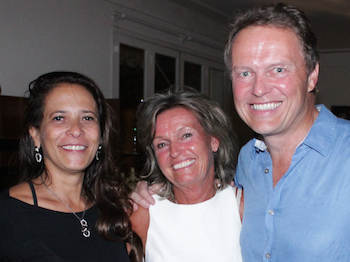 The Norwegian-Brazilian community in Rio bids farewell to Consul General Helle Klem and her husband Michael Klem after four years.

More than 100 people were gathered for a huge farewell party at the very pleasant residence of Mr. Kjetil Solbrække in Laranjeiras, Rio de Janeiro on August 8, 2015. The party was organized to bid farewell to Consul General Helle Klem and her husband Michael, who are leaving Rio de Janeiro after four busy years.

«Brazil is an amazing country, that has everything, and it has been a privilege to live in Rio de Janeiro for four years, a unique experience that I will carry with me for the rest of my life. The Brazilian people is warm, including and very hospitable. They always make you feel welcome and this is something that I have appreciated deeply, and also hope that I have been influenced by. Norwegians have a lot to learn from this», Mrs. Klem says in this interview with NBCC/Nordic Light.

She soon returns to Oslo to assume new tasks in a new department of the Norwegian Ministry of Foreign Affairs, focusing her efforts on economic diplomacy.

«I haven´t had a boring day at work at the Consulate, and it has been a privilege to work with so many competent colleagues. I would like to thank all of you for these unforgettable years and the fantastic cooperation, at the Consulate, with Team Norway, with NBCC, with Brazilians and Norwegians in general. But it is now time to say goodbye after four busy, but fantastic years», Mrs. Klem says. The lovely Brazilian climate is only one of the many things she will miss.

Farewell greetings
Helle Klem says she has learned a lot during the years in Rio de Janeiro, and that today, she feels extremely grateful. Many also wanted to express their gratitude to the dear consul during the party on August 8, 2015.

«Since the very beginning Helle wanted to know what the Consulate General could do to assist the companies, what she could do for us. It is very important to have people like her in positions like this, always offering assistance and support, and always with a lot of enthusiasm and curiosity», Mr. Solbrække said.

Suzana Sandoval Barros, the South America president of Palfinger, is a dear friend of Helle and Michael Klem.

«Thank you for everything you have done for the companies, for companies initiating in Brazil, which was the case for me. Many companies have developed better thanks to you», she said.

Michael Klem was made member of honor of Karanba during the party.

«Karanba is what it is today because of you, and professionally you are one of my biggest mentors», Karanba founder Tommy Nilsen said in his address.

«You have made a big difference with your encouragement, your kind advices and your experience that you have shared so willingly. You have opened doors and make sure that we are seen and heard», Mrs. Nome said.

Team Norway
Back in Norway, Helle Klem will assume a position in the Norwegian Ministry of Foreign Affairs, where her tasks will be focused on economic diplomacy and the promotion of Norwegian economic interests abroad.

«The role and function of authorities to promote and strengthen Norwegian interests abroad is something that interests me greatly. During my time in Rio de Janeiro, I have learned a lot about how Norwegian companies operate, their strengths, competitive advantages and not the least how Norwegian players, be they private or public, can cooperate to overcome challenges and reach common goals. I also feel very privileged to represent a country with so many innovative, professional and competitive companies with a great reputation in Brazil, which they truly deserve”.

She also praises the great collaboration within Team Norway in Rio de Janeiro, often referred to as model to other Norwegian missions around the world.

«My experiences from the great cooperation with NBCC, Innovation Norway, the Embassy, INTSOK, ABRAN, the social projects and the Norwegian community in general, is something I will bring with me and draw inspiration from in my new job. Through our close collaboration, we have been able to pool resources, draw from each-other’s strengths and accomplished so much more than we would separately. Great colleagues have also made it a lot more fun to be a part of Team Norway in Rio».

Language and bureaucracy
In the beginning, the language barrier was however challenging, and the Brazilian bureaucracy has been something that Mrs. Klem has found to be quite overwhelming. The high level visit during Rio +20 in 2012 was probably the biggest event the Consulate General organized during Ms. Klem´s time as Consul General. The 70 person strong delegation, including the Norwegian Prime Minister, several other ministers and representatives from the Norwegian Parliament proved to be quite the logistical challenge. The 2014 World Cup was another big event where the Consulate organized a special response scheme to assist Norwegians in Rio.

«Rio +20 was a huge task for a small consulate, where we manned an office in Barra da Tijuca in order to guarantee everyone the follow-up they needed. And we managed, with substantial help from our friends in Team Norway, of course.»

Consular and administrative tasks also occupy a big part a Consul General´s agenda, and Ms. Klem is happy to see that an increasing number of Brazilians are travelling to Norway – and vice versa. The increasing number of students on exchange programs to both Brazil and Norway is especially encouraging. Except for a few more serious incidents, Ms. Klem says that Norwegians in general seem to stay out of trouble when visiting Brazil.

«They take good care of each other and stay out of problems. As an example, there were no serious incidents during the World Cup although a lot of Norwegians visited Brazil during the Championship.»

Adapting to a changing landscape
The ability to adjust and adapt to new realities is a skill that quickly becomes useful when moving to a new country.

«The ability to capture, analyze and understand the potential consequences of an ever changing landscape, in order to inform Norwegian stakeholders on key developments, is one of the most important task of a diplomatic mission. A lot has changed since the boom we experienced in the oil and gas related industries a few years ago when I first arrived, to the more demanding times we are experiencing today. And in turbulent times, the support and cooperation between businesses and authorities is perhaps more important than ever. It also means that Norwegian companies will need to be patient and take a long term view on activities and investments in Brazil. Personally however, I am optimistic and confident that Norwegian businesses are positioned to handle this very well.”

She has followed the investigations of alleged corruption within Petrobras closely, and expresses satisfaction over the persistence and strength the judicial system has displayed so far.

«I hope these investigations will lead to increased transparency and an equal playing field for those doing business in Brazil, and perhaps increased opportunities for those who have played fair all along.  I also see the investigations as a sign of a strong and independent Brazilian judicial authority, a key trait of any democracy”.

In November, the Consulate is expecting an official visit by the Norwegian Crown Prince and Princess to Brazil and Rio de Janeiro, and the visit is very important, according to Ms. Klem.

«A high level visit like this demonstrates that Brazil continues to be a priority to Norway, and I am confident that it will strengthen our close relationship at a very important time», says Ms. Klem.

Helle Klems successor, Ms. Sissel Hodne Steen will assume her new role as Norwegian Consul General to Rio de Janeiro, September 1, 2015. Ms. Steen has very busy months in front of her, but she is very well prepared to handle her new role. The planning of the high-level visit of Norwegian royalties in November has started and the preparations for the 2016 Olympics are also on the way.

«I will be following these events closely, although unfortunately from a distance, and cheer for both Brazil and our continued strong relationship. I have to admit that it is hard to leave, but four years is probably a suitable period of time, because you manage to keep your focus until the very last day. Sissel Hodne Steen is a highly competent and experienced diplomat and moves to Rio after four years as Minister Councellor at the Embassy in Brasilia. She knows Brazil and Rio de Janeiro very well and will do a great job. I am also confident that Team Norway, the Norwegian community and Rio de Janeiro will welcome her in the best possible way», Helle Klem concludes.