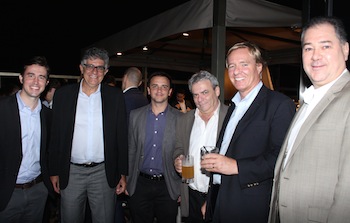 NBCC president Rachid Felix (number two from the left) surrounded by representatives of member companies at the happy hour.

The event took place at the Moonlounge of the JW Marriott Hotel in Copacabana, on April 24, a perfect opportunity for both new and old members to get together and exchange ideas and experiences. Among the new members that have joined NBCC are Grupo CBO, a company that builds and operates offshore support vessels, and Damen Group, which operates more than 32 shipyards, repair yards and related companies worldwide.

Andre Gutgold represents Technion, a Brazilian construction company with 30 years experience in the market. Technion is also among the new associates and joining the Norwegian Brazilian Chamber of Commerce is part of a growth strategy for Technion. Mr. Gutgold, who is a commercial director in the company, is now seeing improvements in the market, after a period with staff reductions and a lower level of activity.

«Economic indicators are positive and the political scene is clearer. We also see international IOCs are feeling more attracted to Brazil, mainly because of the changes that have been made in the regulations of local content and the rules for operatorship on pre-salt blocks. We believe this is a trend, but there are still uncertainties. We still don´t know who will be standing as the Lava Jato investigations continue, but we are seeing positive signs», Mr. Gutgold says.

Technion is headquartered in Rio de Janeiro and currently has about 100 employes, In the past, the company has had several Norwegian clients and also many contracts with Petrobras.

«We are now facing a new era, and we have to adapt to the new market. At Technion, we decided to change the way we approach clients, and as a part of this strategy, we are joining several foreign chambers of commerce as a way of strengthening our network and making new contacts. In NBCC I noticed that there are few construction companies among the members, and this also attracted us to you», Mr. Gutgold explains.

Marcelo Miranda and Juliana Ribeiro are managing directors at Costagille, a firm that offers consultancy services on immigrations, visas, work permits and legalization processes and tax advisory. Costagille has assisted many Norwegian professionals from companies in the oil and gas industry coming to Brazil to work. The company is based in Rio de Janeiro, but also offers services in several other cities.

When the crisis hit, a lot of foreign professionals left Brazil, and Costagille experienced a reduction in the flow of new professionals arriving. As so many other companies, the company was forced to rethink business strategies and budgets and reduce marketing initiatives. But now, the market seems to be reacting.

«We are optimistic as we see foreign companies are returning and activity level is going up again», Mr. Miranda says.

From the left: Carlos Aud Sobrinho with Marcelo Miranda and Juliana Ribeiro from Costagille.

The quality of the services and products delivered by NBCC member companies was one of the things that Costagille found attractive. Having the right connections can definitely facilitate business and improve results.

«We know the associates are companies that demand and also offer high quality services, and we would like to strengthen our ties with them. We also want to see the commercial relations between Norway and Brazil, especially here in the state of Rio de Janeiro where we are based, grow. As business people in Brazil you need to know how to deal with a crisis, and you need to know that bonanza periods are always passing. Maybe we will never again experience the bonanza from 2012 or so, but we are seeing a market and an economy working to get back on track», Mr. Miranda says.