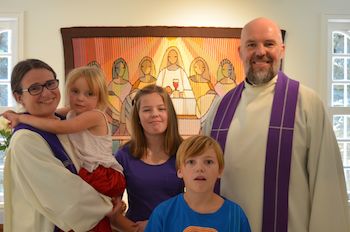 The new Norwegian priest in Rio enjoys surfing (as often as he can) and appreciates the warm people – and weather – in Brazil.

The new Norwegian priest in Rio de Janeiro, Mr. Anders Rosland, arrived in the end of September 2015 with his family.

Mr. Rosland has now settled in in his Gavea residence, not far from the church and even closer to the American school, with his wife Kristine and their three daughters, aged 5, 10 and 12.

While Kristine is also employed in a 50 percent position by the Norwegian church abroad, Sjømannskirken, the youngest daughter Marie (5) is in kindergarden while the two eldest, Halvard (10) and Johanne (12) are students at the American school in Rio.

The family left Lurøy on the windy, northern coast of Helgeland in Norway, and the transition to tropical Rio de Janeiro was enormous, but the family has handled this major life change very smoothly – despite some surprises.

«Finding a scorpion in the bathroom is only one example. It has honestly been quite an extreme transition, from a Norwegian island to one of the biggest cities in the world. Luckily, the nature and geography in Rio contributes to making it a more intimate city, where you can actually recognize people in the supermarket. My family has handled the high temperatures and the access to a pool on the terrace very well, but the children struggled a bit to get used to the food. We eat less fish here, but enjoy the Brazilian meat, of course.»

What Anders Rosland expected to become a challenge in the process of moving from Norway to Brazil, has also been challenging to the family.

«In Lurøy, we never had to worry about locking our car or house. Not even when going away. The fact that you have to lock yourself in here in Rio, is different for us. We are used to living in a society without visible crime. It is a different way of life. But after ten years in Lurøy, we saw the job opening in Rio de Janeiro as a unique chance to gather the whole family. My wife was traveling between Lurøy and Oslo, and in this sense, our daily life in Rio is easier. We really enjoy being together again.»

No stranger to the sea
The Rosland family lived in Lurøy for almost ten years. Lurøy is a municipality on the coast of Helgeland with 1500 small islands. The new priest is therefore no stranger to the sea, and boat and ferries were his main means of transportation in Lurøy when he visited people on the more isolated and distant islands. He also kept in close contact with the crew on the many ferries, fishing boats and other vessels navigating this area.

«I traveled a lot between these islands, and have always liked to meet people. I had my own boat, and people new me like the «priest with the boat». Being a chaplain of the Norwegian Church Abroad here in Rio means being present for the Norwegians in Rio when they need me, both Norwegian on shore and offshore. There are a lot of port calls by Norwegian vessels in Brazil every year, and I am trying to visit Norwegian crew members on these vessels, to let them know that I am here for them», Mr. Rosland says. NBCC meets him after visiting a Farstad supply ship on January 14, 2016, a vessel with seven Norwegian crew members and a total crew of about 50 people.

«It was very nice to meet them and the companies are doing what they can to facilitate these visits. I visited the bridge, talked to the crew, visited the machine room and was shown how the huge crane lifting containers on deck works, in order to understand how it is to live and work on these vessels.  I would like to be a familiar face to the crew members and also a person they can contact as a caregiver far away from home, a person whose presence can contribute to creating a sensation of security.»

According to Mr. Rosland, he would like to attend a variety of needs that Norwegians in Brazil might have, with his presence here.

«I visit people in hospitals, in prisons, and meet Norwegians with big and small problems. It is important to show that we are present and available for those who needs us.»

A good relationship with the business community is also fundamental, and several companies have made agreements with the church to use the facilities in Gavea for meetings, conferences and social events.

«These agreements are important to guarantee our presence here», Mr. Rosland says.

A surfing priest
After four months in Rio de Janeiro, he has learned to appreciate the warm and welcoming people and the beautiful nature of Rio de Janeiro. The beaches are among the hottest Rio attractions, and the chaplain has even taken up surfing, an activity he used to practice when he was younger.

«The agenda is usually packed, but whenever I have time, I go surfing after taking the children to school in the morning, before going to work myself», he says.

Our guess is that not many other expat communities have a surfing priest to turn to in times of need.