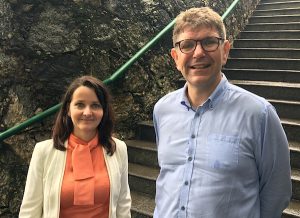 Norwegian Centre for International Cooperation in Education (SIU) is preparing to send 18-20 Norwegian students to Rio through new internship program.

The first group of students is arriving in the second semester of 2018, and come from five different Norwegian universities and university colleges. In Rio de Janeiro, they will attend courses at institutions like PUC, IME, UERJ and UFRJ, as well as work as interns in companies like Kongsberg Maritime, The Norwegian Seafood Council, Petrobras, Technip FMC and Swedish company Roxtec.

«The program called «InternAbroad» has received funding and is a result of the priority given by the Norwegian government to collaboration within research and education with Brazil. Norwegian authorities would like more students  to gain international experience and cross-border knowledge. Six different projects are now taking shape», Eivind Fauskanger and Heidi Tovsrud Knutsen, representing the University College of Southeast Norway (USN), explained when they visited Rio de Janeiro in February.

Pilot program
InternAbroad is a pilot initiative developed by SIU and supported by Innovation Norway. «The objective is to increase the number of students from Norway who do a credit-yielding internship or work placement abroad, where they get practical experience in a job, enhance intercultural competencies and language skills, and acquaint themselves with work environments and business cultures in a foreign country. As a result, students will benefit from a more relevant education, and companies and organizations will benefit from access to a pool of talented students who may become future employees», it says on the SIU website.

The University of Oslo, the Norwegian University of Science and Technology, Norwegian School of Economics and Østfold University College are also involved in the program, and the institutions work closely together in the planning and organizing of the «Intern Abroad». USN has received funding for sending their business and engineering students to companies such as Kongsberg Maritime, TechnipFMC and Roxtec. During their recent visit to Rio de Janeiro, Mr. Fauskanger, Ms. Tovsrud Knutsen and colleagues met with Innovation Norway, the involved companies, Brazilian universities and also with the Norwegian Seamen´s Church.

The interns from USN will be undergraduate students. They will be attending courses at the cooperating universities in Rio during their internship, and stay for one semester in Brazil. As for the other institutions who have been selected for the Intern Abroad, they are planning to send their students for similar programs, involving both internships and studies. One of the projects also includes students from social studies.

Dialogue with companies
Other Norwegian companies in Rio de Janeiro are more than welcome to participate and receive Norwegian interns.

«We have a dialogue with other companies. They have a lot to gain by participating. International experience and cultural knowledge is important for the companies and in the future, we would also like to receive Brazilian interns in Norway», Mr. Fauskanger says. Interested? Contact Eivind Fauskanger at Eivind.Fauskanger@usn.no.

The companies will also participate in the selection process of the bachelor and master students.

«Through this new program, the students will gain valuable cultural competence which will come in extremely important in the future, when they will be applying for jobs. Through a program like this, you also grow as a person, and the students selected to participate, are certainly privileged. This is great chance for them», Mr. Fauskanger and Ms. Tovsrud Knutsen say.

They both work at the USN campus in Kongsberg, and it was the Brazil activities of local companies like Kongsberg Maritime and TechnipFMC, that made them consider Brazil when they applied for funding.

The Brazil strategy of the Norwegian government was launched in 2011. «The Government also wishes to expand Norway’s contact with Brazil and Brazilian society in fields such as research and innovation, higher education, culture and sport. Brazil is expected to become an increasingly important partner for Norwegian research and higher education institutions in the years ahead», the strategy says.