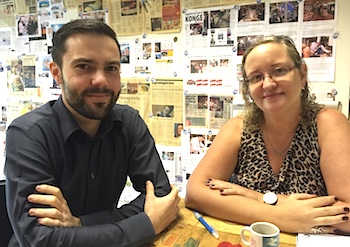 As of January 1st this year The Norwegian Seafood Council has a new team in place in Rio de Janeiro.

Norway exported seafood worth NOK 21.3 billion in the first quarter of 2016 -an increase of 22 per cent or NOK 3.8 billion compared with the first quarter of 2015. The scenario for Brazil is not that bright, with a reduction in imported volumes, but Brazilians are still among the biggest consumers of Norwegian codfish and the Brazil is a key market to Norwegian exporters.

New faces
It was after the former director leaving last year that the Seafood Council decided to restructure the Rio office. Today the office has two marketing advisors working to promote Norwegian seafood in Brazil, supported by a regional supervisor based in Tromsø, Norway.

Vasco Tørrissen Duarte is back in Rio de Janeiro and now accompanies Karina Exner Ribeiro Mendes. Tørrissen Duarte has as the name might suggest a Norwegian mother and a Portuguese father, and he spent 2014 working as an intern at the Rio office. Karina Exner Ribeiro Mendes has an administrative background and has worked at the Seafood Council since 2008.

Vasco spent his childhood in Portugal and when the financial crisis hit Europe in 2008, he decided to go to Norway to study. A few years later he finished his master´s degree, with EU fishery policies as his field of expertise. After spending a year in Brazil in 2014, he went back to Norway where he continued to work for the council. Today, Karina represents continuity and experience at the Rio office, with a solid network among Brazilian supermarket chains and bacalhau importers. Vasco is on the other hand well connected in the industry in Norway, and has the obvious advantage of being Norwegian but having Portuguese as his mother tongue.

«We are a great team and are working very well together», Vasco Tørrissen Duarte says. He recently returned from Norway where he toured the north of the country with a group of 10 Brazilian journalists, who travelled to Norway to understand more about the origins of the Norwegian bacalhau. Masterchef winner Isabel Alves was also part of the group.

«This is something we do every year, because it is a great opportunity to  bring media´s attention to the product, and we are very satisfied with the coverage we have been getting. We want to show them where the bacalhau comes from, show them that this is a sustainable activity and also how important fishing is to many people along the Norwegian coastline. The Brazilian journalists were amazed with the nature, the climate and the people. It was all very exotic to them, especially since we travelled in the winter this year. We even saw aurora borealis», Vasco Tørrissen Duarte says. Origin, sustainability and tracking  are key words in the marketing efforts of the Seafood Council in Brazil, and the council has several events on the agenda in 2016.

In October, the Norwegian minister of fisheries, Mr. Per Sandberg is scheduled to visit Brazil, and later this year, the council is also planning the launch of the two best wines to appreciate with bacalhau, chosen by Portuguese sommeliers, chefs and gastronomic experts last year.

«14.000 suggestions of wines were evaluated, and one red and one white wine selected the best wines for bacalhau in the world. In November, the formal launch of these two wines will take place here in Brazil. Next year we are also planning a big event for the commemoration of the 175 years that have passed since the Norwegian ship «Nordstjernen» arrived in Brazil with the very first bacalhau shipment», they say.

Focus on health
Easter and Christmas continue the most important holidays, where Brazilians traditionally eat a lot of bacalhau. As the Brazilian economy is currently struggling, inflation is a great concern and unemployment is increasing, priority was given to marketing initiatives in supermarkets all over Brazil this Easter.

The prices of Norwegian bacalhau increased from 10-20 percent this Easter compared to the prices during Christmas 2015. In the period December 2015 – March 2016 Brazil imported a total of 11.327 tons of clip fish, or bacalhau, from Norway to a total value of 59 million USD. This is a reduction of -19 percent in volume and – 34 percent in value compared with the same period last year.

«In the supermarkets we have the best chance to reach the consumers and communicate with them. This Easter we had marketing initiatives and tasting in supermarkets in Rio de Janeiro, Sao Paulo, Salvador, Recife and Brasilia, a total of 450 supermarkets», Karina Exner Riberio Mendes explains.

Brazil also imports clip fish products from China and Portugal, but these products saw even bigger reductions for the period, and despite  the red numbers Norway increases its market share in the period as consumers show preference for the classical clip fish, that Norwegian producers supply the Brazilian market.

Father´s Day is another holiday where the Seafood Council is trying to increase the consumption of bacalhau. Several receipts for churrasco with bacalhau have been developed the last years.

«Consumers today are concerned about having a healthy lifestyle and diet, and we are trying to focus on the fact that bacalhau is a very healthy food. The market situation is challenging, and we also focus on showing the consumers the origin of our bacalhau. Increased competition from China and Portugal makes this effort even more important, and we will probably have more marketing campaigns outside of the holidays, to ensure continuity throughout the year», they say.