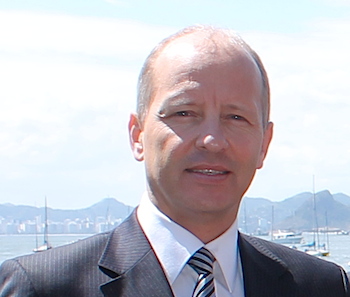 Johnar Olsen is the managing director of Scana in Brazil.

Scana Propulsion, a subsidiary of Scana Industrier ASA, has signed important contracts for delivery of propulsion equipment to customers in Norway, Brazil and South Korea, at a total value of 52 MNOK.

According to Johnar Olsen, the managing director of Scana do Brasil, the main part of the contract is for the delivery of propulsion equipment to AHTS vessels being built in Brazil.

“The propulsion systems are for four different AHTS vessels, being constructed by CBO in Rio de Janeiro and Santa Catarina”, Mr Olsen says. Scana has delivered similar equipment to CBO before, but not to the same type of vessels.

Scana do Brasil Industrias is a wholly owned subsidiary of Scana, and the company represents and markets all of Scana’s companies in Latin America. It was established in 2009, and is located in Rio de Janeiro.

Today, around 48 support vessels with with Scana propulsion equipment are operating in Brazil.

“Scana has a strong participation in the Brazilian AHTS market. More than 55 percent of all AHTS vessels in the Prorefam program, Petrobras´ program to renew the offshore vessels fleet, are or will be equipped with Scana equipment”, Mr. Olsen informs.

The equipment in this last contract will be produced by Scana Industrier in Norway, and shipped to Brazil for the final assembly at the shipyards in Rio de Janeiro and Santa Catarina. Delivery will take place from Q2 2015 to Q1 2016. The contract was signed with Sotreq the caterpillar dealer in Brazil.

Scana do Brasil’s operations include services for existing Scana products in use in the region, and Scana has a strong market position on the servicing side, and the company uses specialized engineers from Scana Volda in Norway and  the Brazilian company Offshore Reparos Navais (ORN).

The good news was disclosed in a press release before Christmas.

“In a relatively tough market, we are proud to sign contracts world wide. It is important to get the confirmation that Propulsion is competitive in strategic segments. Brazil and South Korea are important markets to Scana Propulsion, and the signed contracts represent priority areas such as offshore and fishing”, Hallvard Pettersen, managing director of Scana Volda, said in this press release.

Besides the propulsion division, Scana also has a Offshore and Energy division providing equipment for  FPSOs and steel for subsea equipment, such as F22, Super duplex, and others.

The company is  included on the Petrobras Master Vendor List, as well as in the main Petrobras registration system.

The group has around 1850 employees around the world, and the revenue in 2011 was NOK 2 billion. 65 percent of this is energy-related.

According to the company website, 85 percent of the production takes place in Norway and Sweden, while 64 percent of the customers are in other countries around the world.

The group is increasingly turning to the energy and offshore sectors, and moving from the delivery of steel to more advanced products and components.