NHO and CNI sign agreement with NBCC and sister chambers 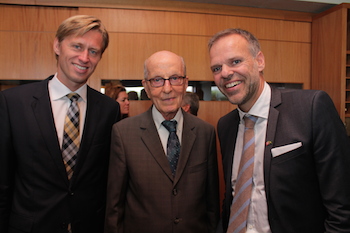 NHO and CNI sign agreement with NBCC and sister chambers

From the left: Halvard Idland, Luiz Chor and Tore Ulstein.The top management and board of directors of the Confederation of Norwegian enterprise (NHO) visit Rio de Janeiro and Brasilia, sign MOU and meet NBCC for business lunch.

60 of the more than 100 Norwegian companies present in Brazil are members of the Confederation of Norwegian enterprise (NHO) in Norway, and NHO members in Brazil are responsible for big investments in the country the last years.

This explains why the NHO board decided to travel to Brazil this October, and on October 27, the top management and the board of directors of NHO met with NBCC and Firjan for a business lunch at Fogo do Chao in Rio de Janeiro.

“We appreciate that the NHO board takes the time to come here and learn more about Brazil, and we would like an even closer cooperation with you in the future”, NBCC president Halvard Idland said during the lunch, where approximately 50 people were present.

The NHO delegation is lead by NHO president Tore Ulstein. He is also the deputy CEO and Innovation Officer in the Ulstein Group, and has experience from Brazil through Ulstein Belga Marine. He was accompanied by eight other board members and by the Director General of NHO, Kristin Skogen Lund.

“We are here to understand what we can do for you, and we deeply value the input the chamber of commerce can give us. We are also very happy with this opportunity to meet with so many important players in the local industry. We would like this to be a productive event for all of us, and we will not only enjoy a good meal together, but also discuss current challenges and opportunities in Brazil”, Mr. Ulstein said.

In his opening remarks, the NHO president also introduced the confederation to the audience. NHO represents more than 24.000 Norwegian companies and it is the biggest organization on the employers side in Norway. In Brazil, NHO works closely with Firjan and CNI, among others.

MOU
On October 29, NHO, CNI and the three Norwegian Brazilian chambers of commerce in Oslo, Sao Paulo and Rio de Janeiro signed a Memorandum of Understanding in Brasilia. They also met with deputy minister Pedro Wendler from the Ministry of Development, Industry and Foreign Trade, and with other authorities in the Brazilian capital.

“By signing this Memorandum of Understanding we are taking the cooperation to the next level. NHO wants to play an important part in helping companies doing business more effectively”, Mr Ulstein said.

Halvard Idland welcomes a closer cooperation between the chambers of commerce and NHO.NBCC president Halvard Idland is very satisfied with the initiative taken by NHO.

“The Memorandum of Understanding is important in setting the stage for an even closer interaction and for further discussions of best practices, and this is basically what we want”, he said.

President of the Brazilian Norwegian Chamber of Commerce in Oslo, Mr. Harald Martinsen outlined that background for the MOU and what has preceded the signing:

“One of the requests from the business community when the Brazil strategy of the Norwegian government was launched in 2011, was to create a mixed economic commission as a forum for discussions and resolving of practical issues. A commission like this had actually been created back in the 1970-s, but it was not active. Earlier this year we managed to organize a visit by a big Brazilian delegation, headed by vice-minister Pedro Wendler to Oslo for a two days meeting. On the first day, NHO and BNCC hosted a business forum where many top figures from leading Norwegian companies appeared, and on the second day, political talks took place with the Ministry of trade an Fisheries (NFD). Next year, a Norwegian delegation will go to Brasilia for a similar session where the idea is that meetings take place every year and alternate between Brazil and Norway. Our idea is to create an annual event where politiciand and leading business people from both countries can get together to exchange opportunities and challenges, and this is why we sign this MOU now. We want to combine a business forum with the more political part of the commission meetings. This is a model that has shown results in our cooperation with Russia”, Mr. Martinsen said.

From the left: Consul General Helle Klem, NHO director Kristin Skogen Lund and DNBs Tom Mario Ringseth.Jon Harald Kilde, who is the president of BW Offshore in Brazil, talked about what it takes to succeed in Brazil. Preparation and a long term perspective are key words, and he listed high costs, bureaucracy, complex regulatory regimes and local content requirements as some of the challenges.

Rachid Felix, commercial director of Subsea7 in Brazil talked about the necessity for predictable and clear rules and regulations, while Mr. Luiz Chor gave a short introduction to the Firjan organization.

“We need to pull in the same direction. Long-term investments require stable rules and a good framework”, Mr. Felix said.

In Rio de Janeiro, the NHO delegation also met with Team Norway in the Rio Sul Business Tower. After the lunch seminar on October 27, the group visited a social project ran by Firjan in the Morro dos Prazeres community. On October 28, they visited Rolls-Royce Marine and Vard in Niteroi and met participants of the Dream Learn Work corporate social responsibility project.