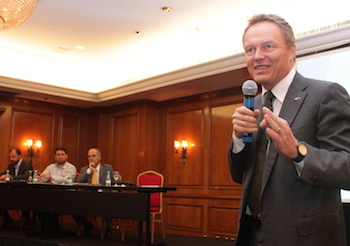 Deputy minister Kåre Fostervold opened the Norway pavilion at Rio Oil & Gas 2014. 55.000 visitors are expected for the 17th edition of the event.

23 Norwegian companies are represented in the Norwegian pavilion at this year´s expo, considered the most important oil and gas event in Latin America.

Rio Oil & Gas takes place in Rio de Janeiro every second year. In the 17t edition of the event, 1300 exhibitors from 30 countries participate while 55.000 visitors are expected.

“Brazil and Norway are both important energy producing countries, and we share many of the same challenges in the oil and gas sector. A few weeks ago, I visited ONS in Stavanger, where I had the pleasure of meeting many Brazilians. Here in Rio I have met even more Norwegians, and this is clearly a testament to the great cooperation between our countries and a clear example of the mutual interest in learning from each other.”

It is the 9th time Norway hosts a pavilion during Rio Oil & Gas. Mr. Fostervold was impressed by the Norwegian presence in Rio de Janeiro, and he also visited Norwegian exhibitors at the expo, and he talked to representatives from companies like Statoil, BW Offshore, Harding, PGS, Jotun and Aptomar. He even ate Norwegian waffels at the stand of the Norwegian Church Abroad, famous for their tasty Norwegian treat.

“Rio Oil & Gas is an ideal place to seek cooperation and build partnerships, and an excellent opportunity to learn about world-leading competence in oil and gas”, he said.

“It is important to mark our presence. During ONS, Petrobras invited Norwegian companies to come to Brazil, and it is great to have the Deputy Minister here, not only to increase the attention, but also by doing an important job in his dialogue with Brazilian authorities.”

Innovation Norway is the main organizer of the Norway pavilion, together with the rest of Team Norway.

“The Norwegian companies present at Rio Oil & Gas 2014 are dedicated to the Brazilian market and focused on succeeding”, says Helle Moen, director of Innovation Norway in Brazil.

The Deputy Minister also had meetings with BNDES and ANP this week.

“This is the second time in less than a year that the minister visits Brazil, and we take this as a good sign of the interest that the Norwegian government is showing the Brazilian oil and gas sector”, Consul General Helle Klem said in her address during the offical opening of the Norwegian pavilion on Monday.