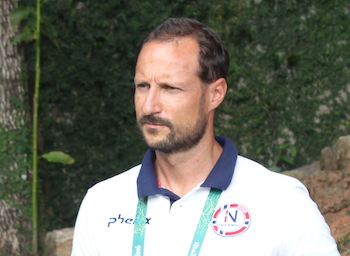 Crown Prince Haakon of Norway met with athletes and representatives from the Norwegian-Brazilian business community during a cocktail reception on August 17, 2016.

The reception took place in the residence of the Norwegian Consul General in Rio de Janeiro, Sissel Hodne Steen, and athletes from the Olympic sailing team were among the many guests.

«It´s a great pleasure to host this reception where our Crown Prince and the athletes have the opportunity to meet. It´s an inspiration to the athletes, and we are certainly very proud to have you here and proud of the way you represent Norway», said Consul General Sissel Hodne Steen.

«It is indeed very nice to get the opportunity to meet the athletes, the Crown Prince himself said in an interview with journalists present.

In her address to the party, Consul General Sissel Hodne Steen talked about Brazilian hospitality and the legacy of the Olympic Games.

«I must say that Rio has pulled it off and is leaving a lasting impression on visitors from all over the world. Brazil is using the games as a stage to convey messages about our common future. Climate change was a recurring theme throughout the opening ceremony. Brazil, with the largest forests and largest biodiversity on the planet is the right place to spread the message», Mrs. Hodne Steen said.

Four day visit
The Crown Prince arrived in Rio de Janeiro on August 17 and stays until August 20. On his first day he watched Cycling BMX. On August 18, he visited the Norwegian Church abroad, in Gávea, a church that is named after his late aunt, HH Princess Ragnhild.

He also watched the handball semi-finals between Norway and Russia and the triathlon in Copacabana.

«I am very excited about the three bronze medals we have won so far, and there are still many competitions left. I will cheer for you», the Crown Prince said.

The Prince himself used to practice windsurfing and sailing when he was younger and he had a lot of questions for the Norwegian sailors Anders Pedersen, Tiril Bue, Kristian Ruth, the twin sisters Maya e Ragna Agerup and Maria Mollestad.

Mr. Tom Tvedt, president of the Norwegian Federation of Sports, was also among the guests.

«It has been very special to come to Brazil and it means a lot to us when our Crown Prince visits us», he said.

Follow-up
This is the second time in less than a year that HRH Crown Prince Haakon visits Brazil, something that clearly demonstrates the great importance of the bilateral ties between Norway and Brazil.

The event served as an important follow-up of the royal visit last year, and during the reception the Crown Prince also met Norway´s ambassador to Brazil, Aud Marit Wiig, the director of ANP, Magda Chambriard and several representatives of the NBCC board.