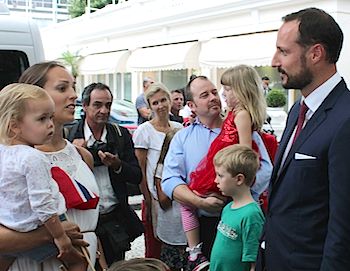 It is safe to say that Norway´s Crown Prince Haakon had a packed agenda the day he spent in Rio de Janeiro during his four day official visit to Brazil this November.

After opening a business seminar, he took part in the promotion of bacalhau in a Rio supermarket, tasted and served grilled bacalhau to other customers. The winner of MasterChef Brazil, Izabel Alvarez was responsible for the menu during the event.

The Crown Prince also had lunch with mayor Eduardo Paes and governor Luis Fernando Pezão in the Guanabara Palace and visited Cenpes, where Norwegian and Brazilian researchers are developing the first mobile robot for offshore installations.

Brazil is Norway´s most important business partner in Latin America, and the royal visit helps boosting both economical and political ties. The Crown Prince headed a business delegation of about 90 people, and was also accompanied by the Minister of Trade and Industry, Monica Mæland, and five deputy ministers.

– Our commercial relations began with the trade in seafood for coffee more than 170 years ago. I am proud that the quality of “Bacalhau da Noruega” is still very much appreciated in Brazil today, making up one fifth of Norwegian exports to Brazil. However, we have definitely expanded into other sectors as well and made substantial investments in a number of them, most notably in oil and gas, HRH Crown Prince Haakon said in his address to the business seminar Tuesday morning.

Photo courtesy of NHD.Graduation ceremony
During a visit to the Vard shipyard, HRH Crown Prince Haakon had the chance to visit a DOF supply vessel under construction. He was received by DOF chairman Helge Møgster and Vard director Jan Brønsten.  Crown Prince Haakon made a guided tour on board the vessel «Skandi Parati».

– This ship is a good example of the good partnership between our two countries, said the BNDES representative to the event. BNDES has been fundamental in the financing of several DOF vessels in Brazil. At Vard, HRH Crown Prince Haakon was introduced to the Norwegian NGO´s Karanba and DreamLearnWork, and he also awarded five young professionals with their qualification letters as welders, that they have acquired through the NGO Dream Learn Work.

– It´s a great privilege for us, we have all struggled and worked hard to get here, and I am proud and grateful, says welder Edson Arthur da Silva Junior (20), who has been working at the Vard shipyard since 2014.

In Itaborai, Norwegian paint producer Jotun formally its new marine and protective coatings factory in the presence of His Royal Highness Crown Prince Haakon, Minister of Trade and Industry Monica Mæland and the governor of Rio, Luiz Fernando Pezão. The facility is Jotun´s first in South America, with a total investment of more than 100 million Brazilian reais, and will have an annual production capacity of 10 million litres a year.

– Jotun is a true global company, and I am glad to represent the Norwegian government and witness this expansion. This factory will create new jobs and is an example of our longterm commitment to Brazil. The Norwegian government also have a longterm commitment to developing our relations to Brazil event further, Mrs. Mæland said during the formal opening.

– Thank you for the confidence you are demonstrating, in Brazil and in the state of Rio. This is not a good moment for our economy and the fact that you believe in us, shows that you have a strategic vision of Brazil. We need this partnership with Norway and with Norwegian companies, and you can always count on our support. I am convinced that we will overcome our difficulties and come stronger out of this crisis, Mr. Pezão said.

When returning to Copacabana Palace, Norwegian children were gathered outside the hotel to greet their prince, and HRH spent quite some time chatting with both younger and older Norwegians.

Beauty and hospitality
At night, Norwegian Ambassador Aud Marit Wiig hosted a formal reception for the Crown Prince at the Copacabana Palace hotel.

– Thank you for hosting this reception to celebrate the strong ties between Brazil and Norway. I have close family in Rio de Janeiro and have been here several times before – but I am still struck by the beauty of the city and the hospitality of the “cariocas”. It is not obvious that Brazil and Norway have much in common. The Arctic Circle cuts through Norway, while the Equator cuts through Brazil.  Our two countries share values and are strong partners in many areas that are important for our common future. Both countries have vast natural resources – like fish, hydropower, and oil and gas. Also, our oil and gas sectors have to contend with a demanding environment and complex geology. Currently, we are facing a challenging economic environment, especially in the oil and gas sector. However, we both have a strong belief that through collaboration we can turn challenges into opportunities, Crown Prince Haakon said.

On November 18, 2015, the Crown Prince travelled to Belem, where he visited INPE and travelled by boat to the Combú island.

During the first day of the official visit to Brazil, the Norwegian delegation had high level talks in Brasilia, and the Crown Prince lunched with Vice-President Michel Temer and participated in a roundtable conference on commerce and industry, organized by the Norwegian Confederation of Industries, NHO, and their Brazilian counterpart CNI. Crown Prince Haakon met with Brazilian students from the mobility program «Science without borders» at the residence of the Norwegian ambassador.