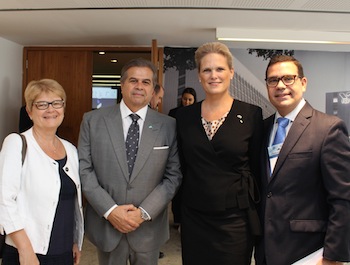 Business event gathers industry and academia for debate on the consequences and challenges brought on by the ongoing transitions in the Brazilian oil and gas sector.

The seminar was organized by The Norwegian Shipowners’ Association Brazil, ABRAN, and FGV Law School, with the support of The Norwegian Consulate General, Innovation Norway and The Research Council of Norway, and took place in the FGV building in Botafogo Rio de Janeiro on October 25, 2016.

According to Mr. Ricardo Cesar Fernandes, Executive Director of ABRAN, the objective of the II Seminar Brazil x Norway is to strengthen the ties of friendship between Brazil and Norway, share experiences and discuss regulatory aspects that reduces the potential of growth in the maritime and offshore shipping sector and the alternatives to attract new investments.

Following almost a decade of growth, driven by pre-salt oil discoveries and heavy investments, the industry has changed to steep decline on revenues, job creation and confidence. The growth cycle of the offshore industry, despite of undeniable achievements, created distortions in the regulatory framework and bottlenecks to long-term sustainable growth. Anchored on protectionist policy and the high demand for national content, the development model has proven itself inappropriate in a scenario marked by economic recession, low oil price and reduced investment capacity from Petrobras.

More than 150 people from the industry and from academia were gathered for the II Brazil x Norway seminar, where several related topics were thoroughly debated.

In his opening remarks, FGV president Carlos Ivan Simonsen Leal also talked about the transition that Brazil as a country is going through, and ABRAN president José Roberto Neves talked about the challenges that supply vessel sector is facing and the urgency in addressing issues related to regulations of the industry. «Today´s event is an opportunity for all of us to understand better what we are up against», he said in his welcoming remarks.

«We are both energy nations with huge offshore resources and have a lot to gain from a mutual beneficial relationship. Since the first Brazil-Norway seminar two yeas ago, the oil prices have dropped dramatically and the entire industry is struggling. The big challenge is how to adjust to this new market situation. But the industry has demonstrated the ability to recover before. Progress has been achieved and the industry deserves recognition. But to get the oil up, cost must go down, and I would also like to focus on the opportunities here today. Transitions require action and action means more efficient and improved production at lower cost, but always without compromising safety. It means standardization, new technology, smarter solutions and less red tape», the Norwegian Deputy Minister said in her presentation to the seminar.

Mrs. Smines Tybring-Gjedde talked about the importance of the oil industry to Norway´s economy and about how Norway already has experience in transition. She described the province outside of Northern Norway as promising, and said that new acreage is the basis for future energy production.

«The industry´s strong interest in the new acreage shows that the Norwegian Continental Shelf remains attractive. We have decades of experience, and have developed a competitive supply and service industry in high demand over the world, and Brazil is one of the largest markets. Technology development is fundamental to unlock new resources and protect the environment. We need to adjust to a low emissions future. Oil and gas will however remain the backbone of our energy supply for a long time, and now we need an active transition to a new phase and a new market», Mrs. Smines Tybring-Gjedde said.

The close Norwegian-Brazilian collaboration on research and development was also highlighted by the Deputy Minister, and she described the two countries as early birds within CCS and said the RD&I cooperation is progressing well.

The Deputy Minister was introduced by Norway´s Consul General Sissel Hodne Steen, who described the seminar as pathfinder and important in terms of highlighting issues that need address.

Petrobras Manager Mauricio Diniz talked about the new Petrobras investment plan, recently released to the market, and the divestment program which is expected to leverage third party investments that might surpass USD 40 billion in the next ten years.

According to the new investment plan, Petrobras will reduce costs by 11 percent in the period from 2017-2021. The company plans to sell assets for USD 15 billion until the end of 2016 and another USD 19,5 billion the next two years.

«The benefits of the divestment program is risk sharing, CAPEX reduction and increased capacity to invest along the value chain. The program will open doors to new opportunities.» Mr. Diniz also outlined the start-up of new production units the next four years, and the measures adopted to strengthen corporate governance. In 2021, the company hopes to be producing 3,41 million boeds. The Petrobras executive also implied that changes in the local content regulations are expected, and he called the latest investment plan more realistic.

«This is a plan that we believe in, and Petrobras is working hard to put this hard phase behind us. It is important for us to be present at events like this where we can show the companies of the sector that we have change course, changed our contracting policies and our corporate management. We have been working closely with Norwegian stakeholders for years, not only with shipowners, but also exchanging technology and buying equipment. Norwegian technology has contributed to our advance in deep waters, and this cooperation is very important to Petrobras and I think it is important to Norway as well», Mr. Diniz said.

Too much capacity
In a separate session, industry representatives discussed the consequences of the difficult phase on the maritime and offshore shipping industry. PUC professor Alfredo Renault was not alone in blaming political mismanagement for the disastrous situation the industry is in.

«The monopolistic view that Petrobras could do it all, is the reason, not the oil price nor the Lava-Jato investigations», he said. Mr. Renault was still among the most optimistic speakers of the session as he analyzed the latest Petrobras investment plan.

«The 19 new units coming into operation the next 5 years will create the need for supply vessels, and this will affect the market you operate in positively. Petrobras divestment program and upcoming regulatory adjustments are contributing to a more positive business environment. Statoil´s acquisition of the Carcará- field was important, and with a far greater symbolic value than the financial value of the transaction itself», Mr. Renault said.

Executive Vice President Teekay Brasil, Mr. Alex Tischendorf talked about the challenges, opportunities and technological trends to the transport of the Brazilian oil & gas production. In harsher environments, the need for specialized tankers increases.  Mr. Tischendorf sees the need for simplifying the exportation process as international oil companies produce oil intended for direct export. Today, these companies have no access to transshipment terminals in Brazil and they have to go to Uruguay to do ship-to-ship transfer of oil as there are no such areas in Brazilian waters.

«This leads to much idle time and lack of efficiency. New technology are under development, like the Hi Load DP-Concept, that can be attached to a conventional oil tanker transforming into a DP Shuttle Tanker», he explained.

Executive Vice President of Farstad Americas Mr. Felipe Meira, believes there are simply too many support vessels in the Brazilian market.

«25 percent of the fleet is currently not in operation, and rates will continue low because there are too many vessels available», he said.

Abilio Melo, the General Manager of Deep Sea Supply Brasil, said that the everyone needs to consider what they can do to cut cost. He believes a new mindset is required.

«You need to think outside the box. We cannot continue asking for governmental support, for protectionism and monopolies. This will only lead to inefficiency. I believe it´s time for integrated efforts to reduce taxes, that we need to work together to guarantee  legal and regulatory stability for our sector, enabling companies with money to invest to come here and create jobs.»

Tom Mario Ringseth of DNB Brasil was the moderator of the session.

Regulatory challenges
The relevance of regulatory agencies to the oil & gas and maritime and offshore shipping industry was the topic of another session.

Vice Dean at the FGV Law School, Mr. Sergio Guerra talked about the history and development of regulatory bodies in Brazilian public administration. ANP and ANTAQ are among the 10 current entities, created with the Real Plan in 1994. Giving the regulatory bodies bigger autonomy is the intention of the current government.

Rear Admiral José Luiz Ribeiro Filho of the Directorate of Ports and Coasts (DPC) talked about the role of Brazilian Maritime Authority, responsible for vessel inspections on different levels, for the development and implementation of norms and regulations, prevention, environmental issues, for salvage and for the investigation in case of an accident. He also outlined the education and training of seamen of different categories. Something that preoccupies the DPC at the moment is the number of platforms out of operation in Brazilian waters.

Antaq Superintendent Flavia Takafashi explained the role of Antaq in this moment of transition. Antaq is accompanying the current developments closely, and expects big changes if Congress passes the law relieving Petrobras of the obligation of operatorship on pre-sal, opening the doors for other companies.

«The market has changed dramatically the last years. A few years ago, Antaq received a lot of applications for new shipyard concessions. This has stopped. The regulations of the contracting of foreign-flagged support vessels might change when foreign operators initiate operations», she said. Antaq is also represented in the coordinating committee of the MOU on maritime transportation signed last year.

«Antaq would like to see our interests aligned», Ms. Takafashi said in her presentation to the seminar.

Torbjørn S. Larssen, Consul at the Norwegian Consulate General in Rio de Janeiro gave a presentation on how Norwegian authorities plans to guarantee continued growth. In 2015, the government launched a strategy called «Blue growth for a green future», and the government stimulate increased interaction between sectors, looking to identify synergies between ocean-related activities

«The shipping sector is very important to Norway, and we have the most advanced fleets of offshore support vessels in the world. The maritime sector is and has always been a forward looking industry. This is a sector that has recovered many times before, and when Norway discovered oil, the shipowners were quick to adapt. Today we also see signs that the industry is adapting to the current crisis and finding new markets, for instance aquaculture and offshore wind.

FGV Law Professor Patricia Sampaio was invited to sum up the session.

«While Norway is ranked number 11 on the Competitiveness ranking of World Economic Forum, Brazil is number 75. This shows that there is space for transition, also when it comes to regulatory questions, but we need to be careful not to send mixed signals to potential future investors. Although the reality we are facing, is complex, it does not have to be messy», she concluded.