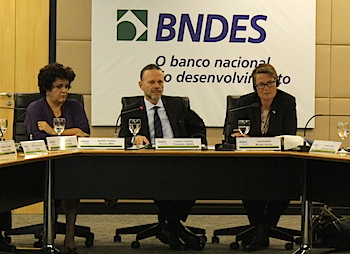 On September 14, 2015, she met with her Brazilian colleague Izabella Teixeira and with the president of BNDES, Luciano Coutinho in the BNDES HQ in Rio de Janeiro. The Amazon Fund was on the agenda, and after the meeting, they also met with Norwegian and Brazilian press.

«Before the summit in Paris in December, Norway will fulfill its commitment to contribute US $ 1 billion for the Amazon Fund. The investment is in recognition of the excellent results obtained in the last decade by Brazil in reducing forest deforestation», Tine Sundtoft says.

The Amazon Fund was launched in 2008 by former president Luis Inácio Lula da Silva. Norway was the first donor to the fund, and has donated about 96 percent of the total funds. Petrobras and the German bank KfW are other donors. Germany recently announced it will donate 100 million euros to the fund.

The main objective of the Fund is to provide support to projects to prevent, monitor and combat deforestation, as well as for the conservation and sustainable use of forests in the Brazilian Amazon.

«The Amazon Fund has consolidated a substantial reduction of emissions caused by deforestation in the Amazon – the best news on climate change in recent years. Led by contributions from Norway, the Amazon Fund has become the anchor of Brazil’s efforts to enable a new paradigm of sustainable development of production and protection», Izabella Teixeira, Minister of Environment of Brazil, said in the meeting.

Brazil has more than achieved a goal of reducing the rate of deforestation by 75 percent, the condition for the payments under an agreement for 2008-15 meant to protect the forest and slow climate change.

«Brazil has established what has become a model for other national climate change funds. The fact that we pay for performance, for results achieved, is vital», Norwegian Environment Minister Tine Sundtoft says.

Norway and Brazil are in talks about further collaboration, but Sundtoft did not give any details on this.

In the beginning of 2014, Norwegian authorities informed that a revised agreement had been signed, but the payment to made in December, marks the end of the first phase of the Norwegian-Brazilian forest agreement.

Brazil is the world’s largest tropical forest country and one of the most important partner countries for the Norwegian climate and forest project.

For more information on the Amazon Fund, click here.

Facts on the Amazon Fund

Facts about the Amazon rainforest

(Source: The Norwegian Ministry of Climate and Environment)